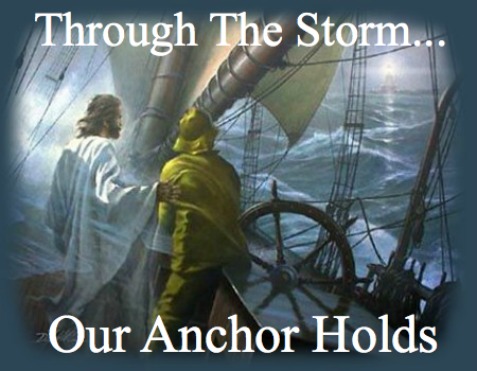 "The Anchor Holds" - The Story Behind the Song

The story behind the writing of this song begins in 1992 when my wife and I experienced what we now call our year of sorrows.

My father died that year, we were facing health problems, I had come to a point of burnout from being in pastoral ministry for 19 years, and the church that I had helped plant was entering the first phases of what became a devastating split. I was also re-evaluating the focus of my calling. I was weary and discouraged.

Then, in the summer of '92, my wife experienced her third miscarriage. We wept as we held the tiny 14-week fetus of our son in our hands. It truly felt as if our visions and dreams had "slipped right through like they were only grains of sand". It seemed as if the best years were over.

I was given a sabbatical from pastoring for six months. During that time, my wife and I grieved and prayed. I also began to play the piano again for hours at a time, alone with God. During this time of sadness and uncertainty, the Holy Spirit gave me a song which I entitled "The Anchor Holds". As I would sing it, I began to experience God's comfort, encouragement and hope. Eventually, fresh vision came and I entered a new phase of the calling on my life.

In the spring of 1993, my old friend Ray Boltz heard about the song during a time of sharing together after one of his concerts in Maine. A few months later, Ray called me and expressed interest in possibly recording it. I sent the song to him "in the rough" and told him that he was free to adapt it for his purposes. Ray reworked some of the lyrics, shortened it a bit, and added a musical bridge and recorded it for his "Allegiance" project. It was released for national airplay in November 1994.

The response to this song has truly been overwhelming. I am so grateful that God can take our broken pieces and make something of value out of them. I am also thankful Ray Boltz who saw the potential of this song and utilized it for God's glory.