Buck is a 2011 American documentary film directed by Cindy Meehl. The film focuses on the life, career, and philosophy of the real-life "horse whisperer" Buck Brannaman.

Buck explores the life of Buck Brannaman from his childhood living with an abusive father to his successful approach to handling and training horses. Brannaman worked on the Robert Redford film The Horse Whisperer as the lead equine consultant. He teaches people to communicate with their horses through leadership and sensitivity, not punishment. 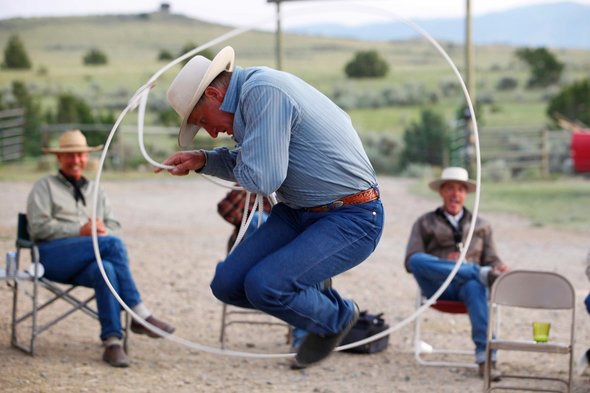 The documentary follows Brannaman to several stops on his normal, 40-week-per-year circuit of ranches where he gives clinics on "natural horsemanship". He spends most of the year on the road, apart from his wife and daughters. Along the way, we learn about his childhood including his celebrity as a child performer of rope tricks, the physical abuse that he and his brother endured at the hands of their father, how a football coach helped to free him from his father after seeing welts on Buck's back and legs, and life with the Shirleys, his foster parents.

It takes a lot to impress me in film and books. This impresses me. From a childhood of severe abuse to the top horse trainer on the planet a story of love and respect that will make you a better human being at no matter what you do. It will be a companion story to Dr. Stanley's Brokeness lecture. With our faith and God's grace we will make a better world one person and one horse at a time. An inspiration let me assure you.