The Swamp Fox is a television series produced by Walt Disney and starring Leslie Nielsen as American Revolutionary War hero Francis Marion. It was based on the 1959 biography of Marion by Robert Duncan Bass.

The theme song *("Swamp Fox, Swamp Fox, tail on his hat... nobody knows where the Swamp Fox at...") was sung by Nielsen as well. Myron Healey played Marion's top aide, Maj./Col. Peter Horry. One of the Swamp Fox's adversaries was Colonel Banastre Tarleton, played by John Sutton. Patrick Macnee played a British captain, Tim Considine played Marion's nephew Gabe Marion and Slim Pickens played Plunkett, one of the Swamp Fox's men. Hal Stalmaster appeared in three of the eight episodes as "Gwynn." The Swamp Fox did not bring to Disney the commercial success that had been achieved by Davy Crockett. The series encompassed eight episodes, running as part of Walt Disney Presents. Episodes were presented on Sundays on ABC from 6:30 to 7:30 p.m. and were also broadcast by CBC Television. The Disney Channel reran Swamp Fox episodes in the 1980s and 1990s, while Nielsen was at the height of a second career as a white-haired comedy movie star. The first three episodes of the series were also released in 2005 on DVD (in a set including three episodes of The Nine Lives of Elfego Baca).

Ironically, the actual Francis Marion typically rode into battle with a Continental Army uniform rather than a tri-cornered hat. 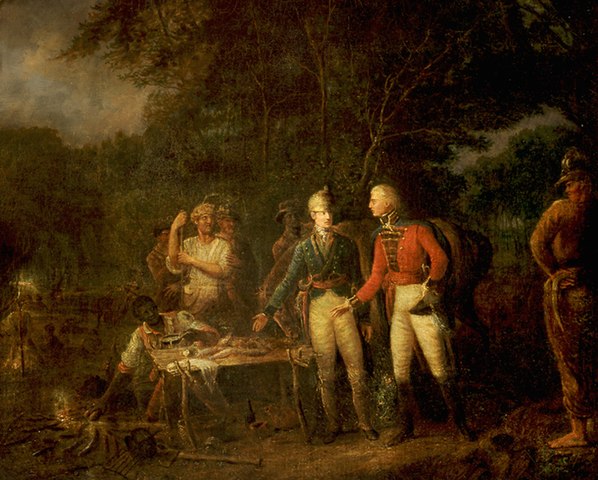 General Marion Inviting a British Officer to Share His Meal by John Blake White; his slave Oscar Marion kneels at the left of the group.

Francis Marion (c. 1732 – February 27, 1795) was a military officer who served in the American Revolutionary War (1775-1783). Acting with the Continental Army and South Carolina militia commissions, he was a persistent adversary of the British in their occupation of South Carolina and Charleston in 1780 and 1781, even after the Continental Army was driven out of the state in the Battle of Camden.

Marion used irregular methods of warfare and is considered one of the fathers of modern guerrilla warfare and maneuver warfare, and is credited in the lineage of the United States Army Rangers and the other American military Special Forces such as the "Green Berets". He was known as The Swamp Fox.