This was an EXCELLENT program. Now we see the future.

Every day seems to bring new revelations in the area of neuroscience. 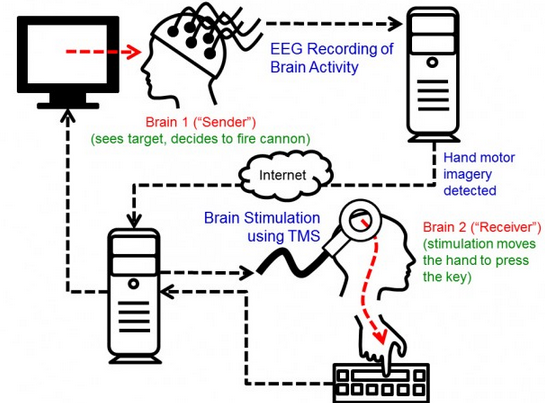 However, when it was announced last year that remote-controlled humans via the Internet became a reality, it was still met with disbelief. The research team from the University of Washington who conducted this experiment is now announcing that they not only have duplicated their original experiment, but believe that they have moved a step closer to making this a viable technology that could be rolled out in the not-too-distant future. Their full press release with video follows our initial report below.

We recently reported on the release of a secret DARPA mind control program at Arizona State University. Part of that research was focused specifically on the attempt to replicate through language the same results obtained with Transcranial Magnetic Stimulation, which is a way to directly control movements, speech, and one's perception of reality via electromagnetic waves aimed at the cerebral cortex. Julie Beal also reported on DARPA's solicitation for portable brain recorders that could eventually be used in every classroom in America. Clearly there is a will to put research into action.

"Soldier" is an episode of the original The Outer Limits television show. It opened the second season of shows on 19 September 1964.

For the second season, Ben Brady took over as producer from Joseph Stefano. This is the first of two episodes written by Hugo and Nebula award-winning science fiction author Harlan Ellison, and is adapted from his 1957 short story "Soldier From Tomorrow." 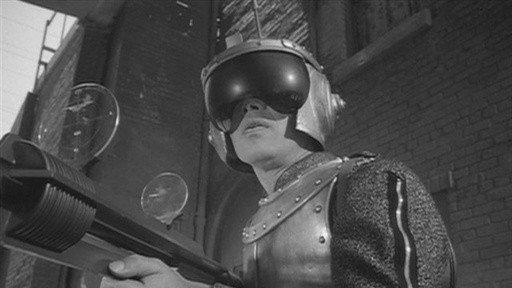 A soldier from Earth's future is sent back in time where he is captured by the government.

Night comes too soon on the battlefield. For some men it comes permanently; their eyes never open to the light of day. But for this man, fighting this war, there is never total darkness. The spidery beams of light in the sky are the descendants of the modern laser beam — heat rays that sear through tungsten steel and flesh as though they were cheesecloth. And this soldier must go against those weapons. His name is Qarlo, and he is a footsoldier, the ultimate infantryman. Trained from birth by the State, he has never known love, or closeness, or warmth. He is geared for only one purpose: to kill the Enemy. And the Enemy waits for him…

Time is fluid. The waters of forever close — and passage may not be completed. The present and the future are for a moment united. And the Enemy, half-today, half-tomorrow, is locked between… 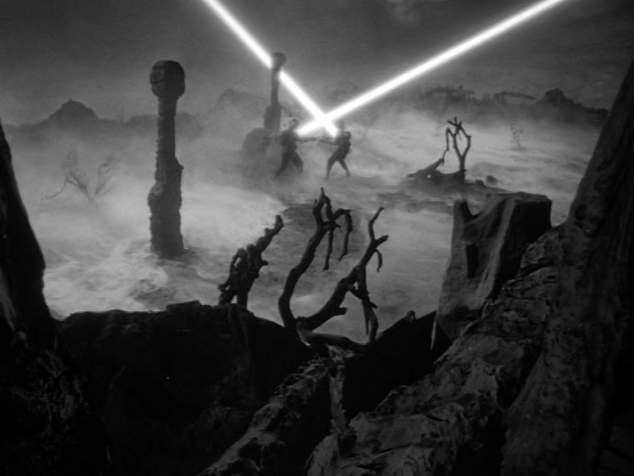 Eighteen hundred years in the future, two foot soldiers clash on a battlefield. A random energy weapon strikes both, and they are hurled into a time vortex. While one soldier is trapped in the matrix of time, the other, Qarlo Clobregnny, materializes on a city street in the United States in the year 1964.

Qarlo is soon captured and interrogated by Tom Kagan, a philologist, and his origin is eventually discovered. Qarlo has been trained for one purpose - to kill the enemy, and that is all he knows. Progress is made in "taming" him after Kagan translates his seemingly unintelligible language - "Nims qarlo clobregnny prite arem aean teaan deao" - into colloquial English..."(My) name is Qarlo Clobregnny, private, RM EN TN DO"; his name, rank and serial letters, which is what any soldier would reveal if captured by the enemy. After a short time in captivity, Qarlo comes to live with the Kagan family, with much reluctance being expressed by his government associates, in an effort to further break through Qarlo's tough exterior, and share knowledge of his way of life in the future.

However, the time eddy holding the enemy soldier slowly weakens. Finally, he materializes fully, and tracks Qarlo to the Kagan home. In a final hand-to-hand battle, Qarlo sacrifices his life to kill the enemy and save the Kagan family.

From the darkest of all pits, the soul of Man, come the darkest questions: Did the soldier finally come to care for those he protected? Or was it just his instinct to kill? Questions from the dark pit. But no answers. For answers lie in the future. Is it a future in which men are machines, born to kill, or is there time for us? Time. All the time in the world… but is that enough?