"The Last Flight" is an episode of the American television anthology series The Twilight Zone. Part of the production was filmed on location at Norton Air Force Base in San Bernardino, California. The vintage 1918 Nieuport 28 biplane was both owned and flown by Frank Gifford Tallman, and had previously appeared in many World War I motion pictures.

PlotFlight Lieutenant Terry Decker, of the British Royal Flying Corps, lands his World War I-era Nieuport biplane on an American airbase in France, after flying through a strange cloud. He is immediately taken into custody and questioned by the American base commander General Harper and his provost marshal, Major Wilson. The two men ask Decker if he was trying to make a film or was part of an air show. Decker identifies himself and his squadron and informs the American officers that the day is March 5, 1917. He is then informed that the day is not actually March 5, 1917, but March 5, 1959, and Decker realizes that he traveled 42 years into the future.

Decker tells the officers that he and his comrade Alexander Mackaye were fighting seven German aircraft and that Mackaye died. He refuses to believe that Mackaye is alive, and has become an Air Vice Marshal in the Royal Air Force, as the American officers inform him. Mackaye had been a hero during the Second World War, saving thousands of lives from German bombing. The Americans also ask Decker if he knew that Mackaye was actually coming to inspect the base that day. Major Wilson tries to help Decker remember what happened. Decker does eventually recall, confessing that throughout his service, he had acted as a coward, only pretending to do his duty and managing to go off on his own during patrols. Only now that he and Mackaye were confronted by a large number of German aircraft, Decker had chosen to escape rather than support Mackaye. He refuses to believe that Mackaye somehow escaped with his life. 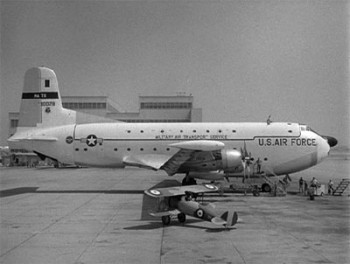 An off-hand suggestion made by Wilson (that perhaps someone else helped him) makes Decker realize that he has been given a second chance. He tells the American officer that there was no one within fifty miles who could have come to help Mackaye, so if Mackaye survived, it had to be because he went back himself. Decker pleads with Wilson to release him from custody, but when he is refused, he escapes after assaulting Wilson and a guard. Finding his plane, once he starts it, he is approached by a mechanic whilst climbing aboard but manages to punch him to the ground. He is about to take-off when Wilson catches up and puts a gun to his head. Decker tells him to let him go, as saving Mackaye would also mean saving thousands of lives that Mackaye had saved during the Second World War. Decker also tells Wilson to shoot if he wants to, but this was an opportunity for him to redeem himself from his previous cowardice. Wilson thus allows him to escape, and Decker flies his plane into the white clouds.

Major Wilson is rebuked for letting Decker go, but when Air Vice Marshal Mackaye arrives, he asks him if he knew Decker. Mackaye says that Decker had saved his life by helping him fight the German planes that day. Although initially he feared Decker had deserted him, Mackaye says Decker returned from out of nowhere to shoot down three German planes, before he was shot down himself. General Harper now shows Mackaye the badge and personal effects of Decker which had been confiscated, upon which Mackaye informed them that these had never been returned by the Germans. When Mackaye demands to know what is going on, Major Wilson suggests that he sit down, calling him "Old Leadbottom" (as Decker had done). "What did you call me?", Mackaye asks incredulously (for no one outside his squadron knew that), as we see the clouds outside the General's window.