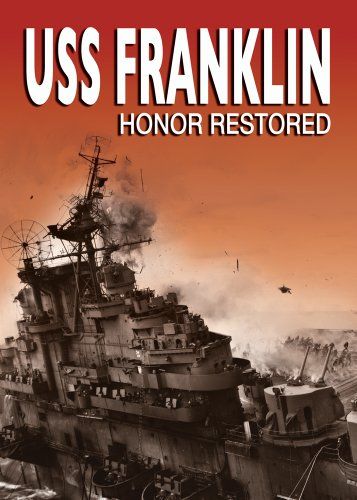 USS Franklin (CV/CVA/CVS-13, AVT-8), nicknamed "Big Ben," was one of 24 Essex-class aircraft carriers built during World War II for the United States Navy, and the fifth US Navy ship to bear the name. Commissioned in January 1944, she served in several campaigns in the Pacific War, earning four battle stars. She was badly damaged by a Japanese air attack in March 1945, with the loss of over 800 of her crew, becoming the most heavily damaged United States aircraft carrier to survive the war. Movie footage of the actual attack was included in the 1949 film Task Force starring Gary Cooper.

Before dawn on 19 March 1945, Franklin, which had maneuvered to within 50 miles (80 km) of the Japanese mainland, closer than any other U.S. carrier during the war, launched a fighter sweep against Honshū and later a strike against shipping in Kure Harbor. The Franklin crew had been called to battle stations twelve times within six hours that night and Gehres downgraded the alert status to Condition III, allowing his men freedom to eat or sleep, although gunnery crews remained at their stations. A single Japanese aircraft approached Franklin without being detected by American forces. As Franklin was about halfway through launching a second wave of strike aircraft, the Japanese bomber pierced the cloud cover and dropped two semi-armor-piercing bombs before the ship's anti-aircraft gunners could fire. The damage analysis came to the conclusion that the bombs were 550 pounds (250 kg). Accounts differ as to whether the attacking aircraft escaped or was shot down.

One bomb struck the flight deck centerline, penetrating to the hangar deck, causing destruction and igniting fires through the second and third decks, and knocking out the combat information center and air plot. The second hit aft, tearing through two decks. At the time she was struck, Franklin had 31 armed and fueled aircraft warming up on her flight deck, and these planes caught fire almost immediately. The 13 to 16 tons of high explosives aboard these planes soon began detonating progressively, and although "Tiny Tim" air-to-surface rockets were loaded aboard Vought F4U Corsairs, their three-point, nose up attitude allowed most of the rockets to fly overboard when their engines ignited. The hangar deck contained planes, of which 16 were fueled and 5 were armed. The forward gasoline system had been secured, but the aft system was operating. The explosion on the hangar deck ignited the fuel tanks on the aircraft, and a gasoline vapor explosion devastated the deck. The twelve "Tiny Tim" rockets aboard these planes ricocheted around the hangar deck until their 138 lb (63 kg) warheads detonated. Only two crewmen survived the fire. One "Tiny Tim" warhead lodged on the third deck below the forward elevator, and was not removed until Franklin reached Ulithi. 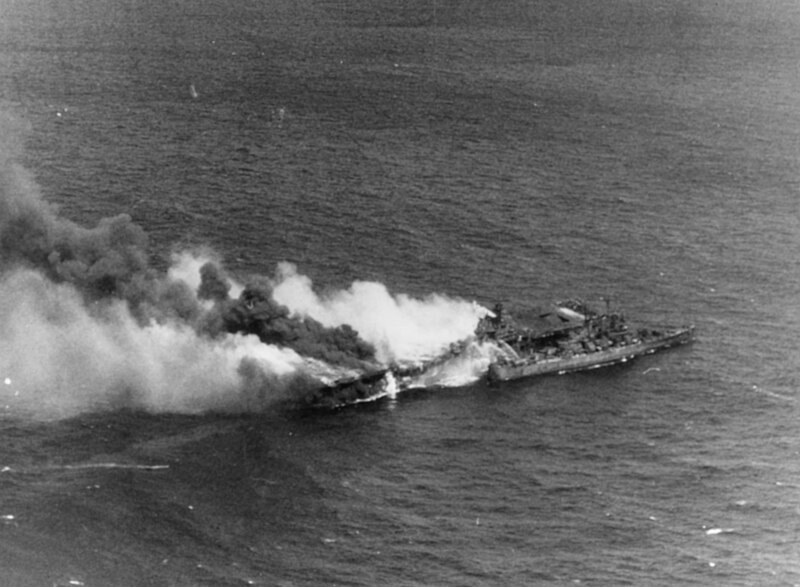 The burning Franklin with USS Santa Fe (CL-60) alongside

Dense smoke soon filled the engineering spaces, which were ordered evacuated with the throttles set. Franklin was soon dead in the water, without radio communications, and broiling in the heat from enveloping fires. On the bridge, Captain Gehres ordered Franklin's magazines flooded but this could not be carried out as the ship's water mains were destroyed by the explosions or fire. Cruisers USS Pittsburgh and USS Santa Fe with destroyers USS Miller, USS Hickox, USS Hunt and USS Marshall left the task group formation to assist Franklin. Accompanied by RADM Bogan, RADM Davison transferred his flag to the destroyer USS Miller by breeches buoy and suggested abandoning ship, but Gehres refused to scuttle the Franklin as there were still many men alive below deck.

The other destroyers fell in astern of the carrier to rescue members of the crew who had been blown overboard, or jumped off to avoid the fire. Some of the destroyers put their bows against the side of the burning carrier to take off men trapped by the fire. Many were killed or wounded, but the hundreds of officers and enlisted who voluntarily remained saved their ship. Among the dead was one of the ship's surgeons, LCDR George W. Fox, M.D., who was killed while tending to wounded sailors; he was awarded the Navy Cross posthumously. When totaling casualty figures for both Franklin cruises numbers increase to 924 killed in action, the worst for any surviving U.S. warship and second only to that of battleship USS Arizona. Certainly, the casualty figures would have far exceeded this number, but for the work of many survivors. Among these were the Medal of Honor recipients Lieutenant Commander Joseph T. O'Callahan, the warship's Catholic chaplain, who administered the last rites, organized and directed firefighting and rescue parties, and led men below to wet down magazines that threatened to explode; and also Lieutenant Junior Grade Donald A. Gary, who discovered 300 men trapped in a blackened mess compartment and, finding an exit, returned repeatedly to lead groups to safety. Gary later organized and led fire-fighting parties to battle fires on the hangar deck and entered the No. 3 fireroom to raise steam in one boiler. USS Santa Fe rescued crewmen from the sea and approached Franklin to take off the numerous wounded and nonessential personnel. Among those evacuated were the surviving members of the embarked Air Group 5, who were deemed nonexpendable. 32 Vought F4U Corsair fighters, 15 Grumman TBM Avenger torpedo bombers, 7 Curtiss SB2C Helldiver dive bombers, and 5 Grumman F6F Hellcat fighters, 59 planes total, were destroyed by the Japanese attack. 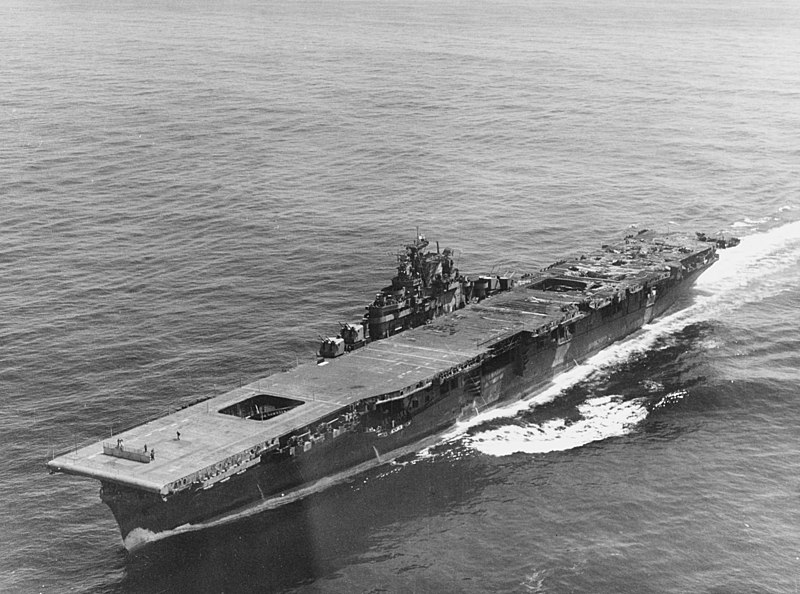 Official Navy casualty figures for the 19 March 1945 fire totaled 724 killed and 265 wounded. Nevertheless, casualty numbers have been updated as new records are discovered. A recent count by Franklin historian and researcher Joseph A. Springer brings total 19 March 1945 casualty figures to 807 killed and more than 487 wounded. Franklin had suffered the most severe damage and highest casualties experienced by any U.S. fleet carrier that survived World War II. In addition to the Medals of Honor for Donald Gary and Joseph O'Callahan and the posthumous Navy Cross for George Fox, 21 additional Navy Crosses and 26 Silver Stars were awarded as a result of actions that day. Among these were a gold star in lieu of a third Navy Cross for CDR (later RADM) Joseph F. "Joe" Taylor, the ship's executive officer and a former torpedo bomber pilot, and Navy Crosses for CAPT (later RADM) Harold C. Fitz, the Santa Fe commander, CDR Stephen Jurika, the Franklin navigator and also a former torpedo bomber pilot, LCDR (later RADM) Dwight L. Johnson, the Miller commander, LCDR Macgregor "Mac" Kilpatrick, an experienced fighter pilot and the commanding officer of Fighting Squadron Five, and LT Fred R. "Red" Harris, a Franklin flight deck officer and a member of the Texas Legislature both before and after the war. Among those who received Silver Stars were LT Grimes W. Gatlin, the ship's other chaplain and a Methodist minister, and Donald H. Russell, a civilian Vought F4U Corsair technical support engineer.

Franklin, like many other wartime ships, had been modified with additional armament, requiring larger crews and substantial ammunition stocks. Aircraft were both more numerous and heavier than originally planned for, and thus the flight deck had been strengthened. The aircraft carrier, therefore, displaced more than originally planned, her freeboard was reduced, and her stability characteristics had been altered. Santa Fe came alongside Franklin to play water from fire hoses over the fire as she received stretcher cases and ambulatory wounded from the carrier. The enormous quantities of water poured aboard her to fight the fires further reduced freeboard, which was exacerbated by a 15-degree list to starboard, and her stability was seriously impaired such that her survival was in jeopardy. Pumping ballast to correct the starboard list caused a 15-degree list to port. Pittsburgh towed Franklin at 5 kn (9.3 km/h; 5.8 mph) for the remaining daylight hours. After six hours, with the fire finally under control such that the ship could be saved, men returned to the engineering spaces and got underway at 25 kn (46 km/h; 29 mph) with only two of the four screws driving. Franklin's planes which had been in the air when the carrier was hit landed aboard the other carriers in the task group, although it was necessary to push some planes overboard to make room for them.[8] Admiral Davison deployed five destroyers to search for any of Franklin's men who had been blown overboard or jumped into the sea.