It is my contention wars are fought in a multidimensional context through a sort of quantum entanglement. We seek the high ground in the past with superior weaponry like the lightsaber or Greek Fire.

This episode suggests that the development of various weapons throughout history may have been guided by aliens. Examined are ancient legends that speak of fire and the secrets of metalworking as gifts from the gods; stories of divine weapons such as Excalibur as possibly powered by an alien source; the mystery of Greek fire as a gift from angels for the Byzantines; the development of the complicated chemistry of gunpowder by the ancient Chinese; the writings of the Hindu Mahabharata describing weapons reminiscent of guided rockets, beam weapons and nuclear devices used by the gods; and the Cambodian tales of Preah Pisnulok who wielded a blazing sword reminiscent of the science-fictional lightsaber. 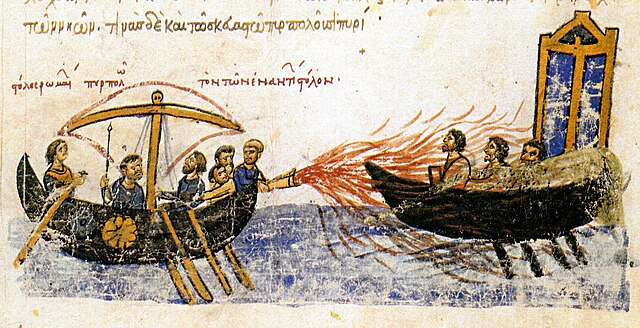 A Byzantine ship uses Greek fire against a ship of the rebel, Thomas the Slav, 821. 12th century illustration from the Madrid Skylitzes