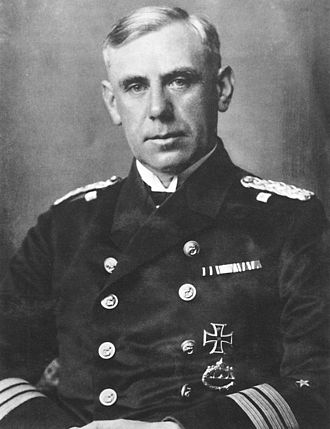 Wilhelm Franz Canaris (1 January 1887 ? 9 April 1945) was a German admiral and chief of the Abwehr, the German military intelligence service, from 1935 to 1944. Initially a supporter of Adolf Hitler, by 1939 he had turned against the regime. During World War II he was among the military officers involved in the clandestine opposition to Nazi Germany leadership. He was executed in Flossenbürg concentration camp for high treason as the Nazi regime was collapsing.

In 1905, at the age of seventeen, Canaris joined the Imperial Navy and by the outbreak of the First World War in 1914 was serving as an intelligence officer on board the SMS Dresden, a light cruiser he had been assigned to in December 1911. This was the only warship that managed to evade the Royal Navy for a prolonged period during the Battle of the Falkland Islands of December 1914, largely due to Canaris' skilful evasion tactics.

After the Battle of Más a Tierra, the immobilized Dresden anchored in Cumberland Bay, Robinson Crusoe Island and contacted Chile with regard to internment. While in the bay, Royal Navy ships approached and shelled the Dresden. The crew scuttled the ship. Most of the crew was interned in Chile in March 1915, but in August 1915, Canaris escaped by using his fluency in Spanish. With the help of some German merchants he was able to return to Germany in October 1915. On the way, he called at several ports, including Plymouth in Great Britain.

Canaris was then given intelligence work as a result of having come to the attention of German naval intelligence (likely due to his clever escape from Chile). German plans to establish intelligence operations in the Mediterranean were under way and Canaris seemed a good fit for this role. Eventually he was sent to Spain, where in Madrid his task was to provide clandestine reconnaissance over enemy shipping movements and to establish a supply service for the U-boats in naval warfare in the Mediterranean during World War I. After being assigned to the Inspectorate of Submarines by the Naval Staff on 24 October 1916, he took up training for duty as a U-boat commander and graduated from Submarine School on 11 September 1917.

He ended the war as a U-boat commander from late 1917 in the Mediterranean and was credited with a number of sinkings, even coming to the attention of the Kaiser. As a result of his exploits in Spain, he was awarded the Iron Cross First Class. Canaris spoke six languages with fluency, one of which was English. As a naval officer of the old school, he had great respect for Great Britain's Royal Navy, despite the rivalry between the two nations. 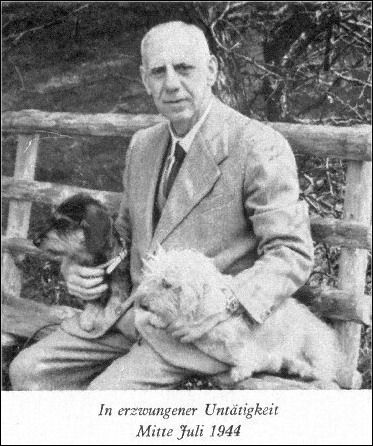 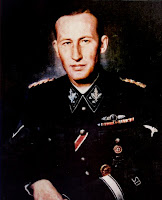 Reinhard Tristan Eugen Heydrich (7 March 1904 – 4 June 1942) was a high-ranking German SS and police official during the Nazi era and a main architect of the Holocaust. He was chief of the Reich Main Security Office (including the Gestapo, Kripo, and SD). He was also Stellvertretender Reichsprotektor (Deputy/Acting Reich-Protector) of Bohemia and Moravia. He served as president of the International Criminal Police Commission (ICPC, later known as Interpol) and chaired the January 1942 Wannsee Conference which formalised plans for the "Final Solution to the Jewish Question"—the deportation and genocide of all Jews in German-occupied Europe.

Many historians regard Heydrich as the darkest figure within the Nazi regime; Adolf Hitler described him as "the man with the iron heart". He was the founding head of the Sicherheitsdienst (Security Service, SD), an intelligence organisation charged with seeking out and neutralising resistance to the Nazi Party via arrests, deportations, and murders. He helped organise Kristallnacht, a series of coordinated attacks against Jews throughout Nazi Germany and parts of Austria on 9–10 November 1938. The attacks were carried out by SA stormtroopers and civilians and presaged the Holocaust. Upon his arrival in Prague, Heydrich sought to eliminate opposition to the Nazi occupation by suppressing Czech culture and deporting and executing members of the Czech resistance. He was directly responsible for the Einsatzgruppen, the special task forces that travelled in the wake of the German armies and murdered more than two million people by mass shooting and gassing, including 1.3 million Jews.

Heydrich was critically wounded in Prague on 27 May 1942 as a result of Operation Anthropoid. He was ambushed by a team of Czech and Slovak soldiers who had been sent by the Czechoslovak government-in-exile to kill the Reich-Protector; the team was trained by the British Special Operations Executive. Heydrich died from his injuries a week later. Nazi intelligence falsely linked the Czech/Slovak soldiers and resistance partisans to the villages of Lidice and Ležáky. Both villages were razed; all men and boys over the age of 16 were shot, and all but a handful of the women and children were deported and killed in Nazi concentration camps. 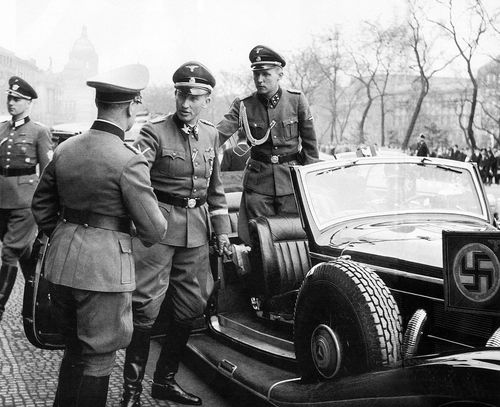 By late 1940, German armies had invaded most of Western Europe. The following year, Heydrich's SD was given responsibility for carrying out the Nacht und Nebel (Night-and-Fog) decree. According to the decree, "persons endangering German security" were to be arrested in a maximally discreet way: "under the cover of night and fog". People disappeared without a trace with none told of their whereabouts or fate. For each prisoner, the SD had to fill in a questionnaire that listed personal information, country of origin, and the details of their crimes against the Reich. This questionnaire was placed in an envelope inscribed with a seal reading "Nacht und Nebel" and submitted to the Reich Main Security Office (RSHA). In the WVHA "Central Inmate File", as in many camp files, these prisoners would be given a special "covert prisoner" code, as opposed to the code for POW, Felon, Jew, Gypsy, etc.[a] The decree remained in effect after Heydrich's death. The exact number of people who vanished under it has never been positively established, but it is estimated to be 7,000.

After Hitler’s pal died, Nazis recreated his injuries in a sick experiment

The experiments were actually precipitated by the death of one of Hitler’s close friends, high-ranking SS officer Reinhard Heydrich, who died from injuries sustained during a car bombing in 1942. Heydrich was treated by Himmler’s personal physician, Dr. Karl Gebhardt, who refused to use sulfa drugs when operating on him. When he died, Hitler blamed Gebhardt, insisting Heydrich was killed by gas gangrene.