This was a stunning episode. I feel there is no doubt at this point that the human race and our sacred Eden have been involved in a war of the multiverse. It involves time travel and other dimensions and is fought in many different time periods as various sides seek advantage. We are seduced with the technology and enslaved as sacrificial soldiers. What if the root cause of war is the invasion of an advanced race of life waging a perpetual war between themselves at our expense? Since we are outside of the information loop, we have no idea it is even occurring. The tree of knowledge was an awesome tree bearing very bitter fruit.

This episode speculates that Nazi Germany had experimented with advanced alien technology and built flying machines, such as the Haunebu and the Die Glocke (The Bell), and rumors that some of this technology may have made its way to the United States and helped jumpstart the Apollo program.

The Nazi Bell: Proof Of A Nazi Secret Space Program?

After the close of World War II, many Nazis were tried at war crime tribunals for crimes against humanity and violations of human rights. One defendant was Jakob Sporrenberg, a former Nazi SS Obergruppenfuhrer, one of the highest commissioned Nazi SS ranks. According to Sporrenberg’s affidavit, the Bell was a highly advanced technology that produced a hissing, or buzzing sound when operational. He noted that because of the sound, his fellow Germans referred to the Bell as “Der Bienenstock,” the German word for “beehive.” 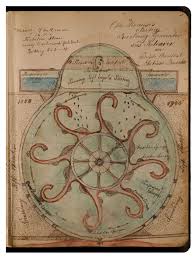 But evidence of the existence of the Nazi Bell does not end with Sporrenberg. Many conspiracy theorists point to the paintings of the late 19th-cen. artist, Charles A. A. Dellschau, as additional evidence of the Bell’s earlier existence.

Witkowski is a contemporary Polish author, editor and military journalist. In 2003 he published his book “Prawda o Wunderwaffe,” which translates to “The Truth About the Wonder Weapon.” The book includes a detailed description of the Bell craft. Witkowski’s book was eventually re-printed in Germany under the title, “Die Wahrheit über die Wunderwaffe.”

Nick Cook was a military journalist and author. Expanding on Witkowski’s writings about the Nazi Bell, Cook providing his own opinions and research in his book, “The Hunt for Zero Point.” Cook believes the Bell was eventually transported to the United States as per an agreement between SS General Hans Kammler and American officials.

In his 2007 book, “Hitler’s Suppressed and Still-Secret Weapons, Science and Technology,” Henry Stevens writes that the violet- hued fuel used to power the Bell was red mercury, as conventional mercury does not contain fluid compounds. Stevens also tells a story of a German scientist, Otto Cerny, who told a teenaged Greg Rowe about special Third Reich technology that utilized a concave mirror atop a device believed to be the Nazi Bell. Rowe claims Cerny told him this device was even capable of generating images from the past.

A slew of other writers, including Jim Marrs and Joseph P. Farrell, have made mention of the Bell in their publications, often associating this “wunderwaffen” or “miracle weapon” with Nazi occultism, free energy and anti-gravity research.

Hans Kammler (26 August 1901 – 9 May 1945) was a German civil engineer and SS commander during the Nazi era. He oversaw SS construction projects and towards the end of World War II was put in charge of the V-2 missile and jet programmes.

Albert Speer made Kammler his representative for "special construction tasks", expecting that Kammler would commit himself to working in harmony with the ministry's main construction committee. But in March 1944 Kammler had Göring appoint him as his delegate for "special buildings" under the fighter aircraft programme, which made him one of the war economy's most important managers, and robbed Speer of much of his influence.

On 1 April 1945, Kammler ordered the evacuation of 500 missile technicians to the Alps. Since the last V-2 on the western front had been launched in late March, on 5 April Kammler was charged by the Oberkommando der Wehrmacht to command the defence of the Nordhausen area. However, rather than defend the missile construction works, he immediately ordered the destruction of all the "special V-1 equipment" at the Syke storage site. What exactly this order implied is unclear.

US occupation forces conducted various inquiries into Kammler’s whereabouts, beginning with the headquarters of 12th Army ordering a complete inventory of all personnel involved in missile production on 21 May 1945. This resulted in the creation of a file for Kammler, stating that he was possibly in Munich. The CIC noted that he had been seen shortly prior to the arrival of US troops in Oberjoch.

The Combined Intelligence Objectives Sub-Committee (CIOS) in London ordered a search for him in early July 1945. 12th Army replied that he was last seen on 8 or 9 April in the Harz region. In August, Kammler's name made "List 13" of the UN for Nazi war criminals. Only in 1948 did the CIOS receive the information that Kammler reportedly fled to Prague and had committed suicide. Original blueprints of Kammler’s major projects were later found in the personal property of Samuel Goudsmit, the scientific leader of the Alsos Mission.

In 1949 a report written by one Oskar Packe on Kammler was filed by the US Denazification office in Hesse. The report stated that Kammler had been arrested by US troops on 9 May 1945 at the Messerschmitt works at Oberammergau. However, Kammler and some other senior SS personnel had managed to escape in the direction of Austria or Italy. Packe disbelieved the reports about a suicide, as these were "refuted by the detailed information from the CIC" about arrest and escape.

A CIC report from April 1946 listed Kammler among SS officers known to be outside Germany and considered to be of special interest to the CIC. In mid-July 1945, the head of the Gmunden CIC office, Major Morrisson interviewed an unnamed German on the issue of a numbered account associated with construction sites for plane and missile production formerly run by the SS. A report published years later, in late 1947 or early 1948, stated that only Kammler and two other persons had access to the account. The report also said that "shortly after the occupation, Hans Kammler appeared at CIC Gmunden and gave a statement on operations at Ebensee". The CIC notes on the interview give no name, but the interviewee must have been one of the three people with access to the account. Aside from Kammler, one was known to have left Austria in May 1945, the other was in a POW camp during July.

Finally, Donald W. Richardson (1917-1997) a former OSS special agent involved in the Alsos Mission, claimed to be "the man who brought Kammler to the US". Shortly before he died, Richardson reportedly told his sons about his experience during and after the war, including Operation Paperclip. According to them, Richardson claimed to have supervised Kammler until 1947. Kammler was supposedly "interned at a place of maximum security, with no hope, no mercy and without seeing the light of day until he hanged himself".