Infamous Assassinations - Episode 04 - The... by tvshowscorner 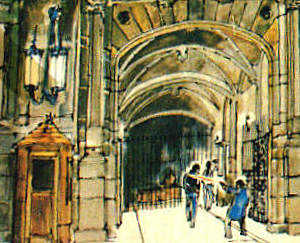 John Lennon was an English music artist who gained worldwide fame as one of the members of the Beatles, for his subsequent solo career, and for his political activism and pacifism. On Monday, December 8, 1980, Lennon was shot by Mark David Chapman in the archway of the Dakota, his residence in New York City. Lennon had just returned from Record Plant Studio with his wife, Yoko Ono.

After sustaining four major gunshot wounds, Lennon was pronounced dead on arrival at Roosevelt Hospital. At the hospital, it was stated that nobody could have lived longer than a few minutes after sustaining such injuries. Shortly after local news stations reported Lennon's death, crowds gathered at Roosevelt Hospital and in front of the Dakota. Lennon was cremated at the Ferncliff Cemetery in Hartsdale, New York, two days after his death; the ashes were given to Ono, who chose not to hold a funeral for him. The first media report of Lennon's death to a US national audience was announced by Howard Cosell, on ABC's Monday Night Football.

Photographer Annie Leibovitz went to the Lennons' apartment to do a photo shoot for Rolling Stone magazine. Leibovitz promised Lennon that a photo with Ono would make the front cover of the magazine, even though she initially tried to get a picture with Lennon by himself. Leibovitz said, "Nobody wanted [Ono] on the cover". Lennon insisted that both he and his wife be on the cover, and after taking the pictures, Leibovitz left their apartment at 3:30 p.m. After the photo shoot, Lennon gave what would be his last interview, to San Francisco DJ Dave Sholin, for a music show to be broadcast on the RKO Radio Network. At 5:40 p.m., Lennon and Ono, delayed by a late limousine, left their apartment to mix the song "Walking on Thin Ice" (an Ono song featuring Lennon on lead guitar) at the Record Plant Studio. 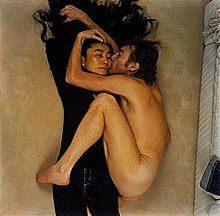 Leibovitz's portrait of Lennon and Ono, taken on the day of the killing

As Lennon and Ono walked to a limousine, shared with the RKO Radio crew, they were approached by several people seeking autographs. Among them was Mark David Chapman. It was common for fans to wait outside the Dakota to meet Lennon and ask for his autograph. Chapman, a 25-year-old security guard from Honolulu, Hawaii, had previously travelled to New York to murder Lennon in October (before the release of Double Fantasy), but had changed his mind and returned home. Chapman silently handed Lennon a copy of Double Fantasy, and Lennon obliged with an autograph. After signing the album, Lennon asked, "Is this all you want?" Chapman smiled and nodded in agreement. Photographer and Lennon fan Paul Goresh took a photo of the encounter. Chapman had been waiting for Lennon outside the Dakota since mid-morning and had even approached the Lennons' five-year-old son, Sean, who was with the family nanny, Helen Seaman, when they returned home in the afternoon. According to Chapman, he briefly touched the boy's hand.

The Dakota's doorman, Jose Perdomo, and a nearby cab driver saw Chapman standing in the shadows by the archway. As Lennon passed by, he glanced briefly at Chapman, appearing to recognize him from earlier. Seconds later, Chapman took aim directly at the center of Lennon's back and fired five hollow-point bullets at him from a Charter Arms .38 Special revolver, in rapid succession, from a distance of about 9 or 10 feet (about 3 m). Based on statements made that night by NYPD Chief of Detectives James Sullivan, numerous radio, television, and newspaper reports claimed at the time that, before firing, Chapman called out, "Mr. Lennon", and dropped into a combat stance.

Later court hearings and witness interviews did not include either "Mr. Lennon" or the "combat stance" description. Chapman has said he does not remember calling out to Lennon before he fired, but he claimed to have taken a "combat stance" in a 1992 interview with Barbara Walters. The first bullet missed, passing over Lennon's head and hitting a window of the Dakota building. Two of the next bullets struck Lennon in the left side of his back, and the other two penetrated his left shoulder.

Lennon, bleeding profusely from external wounds and from his mouth, staggered up five steps to the security/reception area, saying, "I'm shot, I'm shot". He then fell to the floor, scattering cassettes that he had been carrying. The concierge, Jay Hastings, first started to make a tourniquet, but upon ripping open Lennon's blood-stained shirt and realizing the severity of the musician's multiple injuries, he covered Lennon's chest with his uniform jacket, removed his blood-covered glasses, and summoned the police.

Outside, doorman Perdomo shook the gun out of Chapman's hand then kicked it across the sidewalk. Chapman then removed his coat and hat in preparation for the arrival of police—to show he was not carrying any concealed weapons—and sat down on the sidewalk. Perdomo shouted at Chapman, "Do you know what you've just done?", to which Chapman calmly replied, "Yes, I just shot John Lennon."

The first policemen to arrive were Steven Spiro and Peter Cullen, who were at 72nd Street and Broadway when they heard a report of shots fired at the Dakota. The officers arrived around two minutes later and found Chapman sitting "very calmly" on the sidewalk. They reported that Chapman had dropped the revolver to the ground and was holding a paperback book, J. D. Salinger's The Catcher in the Rye. They immediately put Chapman in handcuffs and placed him in the back seat of their squad car. Chapman made no attempt to flee or resist arrest.

Jose Perdomo was CIA. He was involved in The Bay of Pigs fiasco. He could have very well been the lead in all of this.

At the 1972 Republican convention there was a CIA, LAPD plot to have a terrorist event framing Lennon and the Black Panthers. It was foiled.

I wrote a short screenplay about it. John was more powerful than the president. The NWO didn't control him. So they kill. Princess Diana, Marilyn Monroe, James Dean, JFK and RFK are all included. John Paul I as well. President Reagan was an attempt as well as Pope John Paul II. Bob Marley another sang, how long will they kill our prophets? The answer is obvious. Until we learn the trick and change the channel from corporate propaganda. The show may leave out a few of the finer points. We don't.