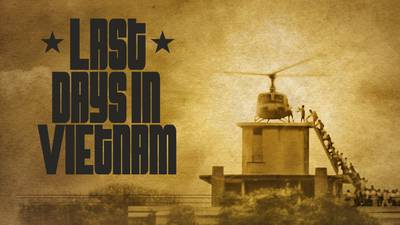 Explore the Last Days Experience site here. Academy Award® Nominee for Documentary Feature. In April of 1975, the North Vietnamese Army was closing in on Saigon as South Vietnamese resistance was crumbling. Approximately 5,000 Americans remained with roughly 24 hours to get out. Their South Vietnamese allies, co-workers, and friends faced certain imprisonment and possible death if they remained behind, yet there was no official evacuation plan in place. Still, over the last days in Vietnam, with the clock ticking and the city under fire, 135,000 South Vietnamese managed to escape with help from a number of heroic Americans who took matters into their own hands, engaging in unsanctioned and often makeshift operations in a desperate effort to save as many people as possible.

The Vietnam War (Vietnamese: Chiến tranh Việt Nam), also known as the Second Indochina War, and also known in Vietnam as Resistance War Against America (Vietnamese: Kháng chiến chống Mỹ or simply the American War, was a Cold War-era proxy war[ that occurred in Vietnam, Laos, and Cambodia from 1 November 1955 to the fall of Saigon on 30 April 1975. This war followed the First Indochina War (1946–54) and was fought between North Vietnam—supported by the Soviet Union, China and other communist allies—and the government of South Vietnam—supported by the United States and other anti-communist allies. The Viet Cong (also known as the National Liberation Front, or NLF), a South Vietnamese communist common front aided by the North, fought a guerrilla war against anti-communist forces in the region. The People's Army of Vietnam (also known as the North Vietnamese Army) engaged in a more conventional war, at times committing large units to battle. HO CHI MINH CITY — Under the shadow of a heavy security presence, Vietnam celebrated the 40th anniversary of the fall of Saigon on Thursday with speeches, martial music, dance performances and a massive military parade.