TALES OF THE GUN: Duelling Pistols

Wouldn't politics be very interesting today if duelling were still in vogue. Our leaders might again be men of honor and courage. They are quite keen to send others to conflict, but hide behind vast lawyers of security themselves. There was a day though. 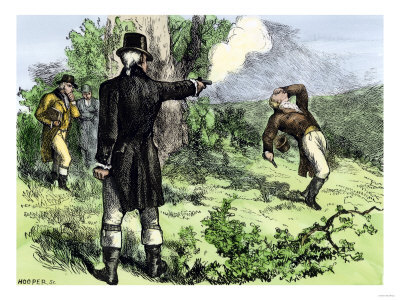 A duelling pistol is a type of pistol that was manufactured to be used in a duel, when duels were customary and not illegal. Duelling pistols are often single-shot flintlock or percussion black-powder pistols which fire a lead musket ball. They were often made in identical pairs to put both duellists on the same footing. 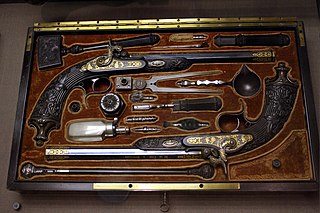 Standard flintlock pistols have a noticeable delay between pulling the trigger and actually firing the bullet. Purpose-built duelling pistols have various improvements to make them more reliable and accurate, such as longer and heavier barrels, spurs on the trigger guards, saw handles, platinum-lined touch-holes and hair triggers. All component parts were manufactured, hand-finished and then adjusted with great care and precision, which made duelling pistols much more costly than standard firearms of the period. Special care was taken when moulding the lead bullets to ensure that there were no voids which would affect accuracy. Pistols were carefully loaded identically, and each duellist was offered his choice of indistinguishable loaded pistols. As duels were generally fought at short distances which were paced out, typically 30 to 40 feet (9 to 12 m),[1] between stationary opponents, extreme accuracy was not required.[2]

Duelling pistols had long smoothbore barrels (typically 10 in (250 mm)) and fired large, heavy bullets. Pistols with calibers of 0.45 in (11 mm), 0.52 in (13 mm), 0.58 in (15 mm) or even 0.65 in (17 mm) were common.[3] The bullets loaded in them could weigh half an ounce (214 grains (13.9 g)) in .52 caliber, or more in larger calibers. Bullets were fired with a muzzle velocity of approximately 800 feet per second (240 m/s), which made a .52 caliber bullet about as lethal as a current .45 ACP round, capable of inflicting very severe wounds. These injuries, coupled with the primitive state of emergency medicine at the time when duels were commonplace, meant that pistol duels frequently resulted in fatalities, either immediately or afterwards. This was the fate of Alexander Pushkin, a highly experienced pistol duellist who had fought 29 duels before being wounded in the stomach by Georges-Charles de Heeckeren d'Anthès on 8 February 1837. Pushkin managed to return fire, slightly wounding d'Anthès, but died two days later.[4]

Most duelling pistols had smooth bores, though some had scratch rifling, a subtle form of rifling which was difficult to see with the naked eye. Pistols with rifled barrel spin-stabilise the shot when it is fired, resulting in much improved accuracy. As a result, duelling pistols with rifled barrels were considered unsporting by many, although there was no unfairness so long as the pistols were identical.[3]

The use of pistols in duels became popular in Britain, France and America during the mid-eighteenth century. Initially standard holster or travelling pistols were mainly used, but by the end of the century special-purpose duelling pistols were being made by craftsmen in England, France Germany, Austria and America.[3]

The most famous and innovative manufacturers were London-based companies such as Wogdon & Barton, Durs Egg, Manton, Mortimer, Nock, and Purdey.[3]

Pairs of duelling pistols were often supplied in compartmentalised wooden cases along with a powder flask, rods for cleaning and loading, spare flints, spanners and other tools, and a bullet mould.