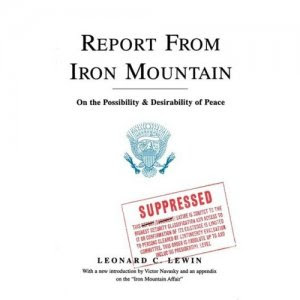 The Video that started it all - written about in the WALL STREET JOURNAL and the subject of an NBC DATELINE. This is a 2:40 hour documentary investigating the little known IRON MOUNTAIN REPORT, leaked to the press in 1967. Purports to be a top-secret government plan to bring in the New World Order and the ultimate plans for American citizens. Declared a hoax, it was later verified by a top Pentagon official as real. The agenda is being carried out right under the noses of the American people. UFO?s play a major role in the Iron Mountain NWO. It is all about people control via deception and manipulation. Deep into Eugenics, birth control and hideous plans for a tyrannical slave state. It is all coming true after OKC and 9-11 with the Patriot Act, Homeland Security and the military police operating in America. Airports first, railroads, then highways, and finally a complete LOCKDOWN under the pretense of ?security?. A MUST SEE VIDEO