CONSPIRACY NIGHT AT THE MOVIES: Out of Africa 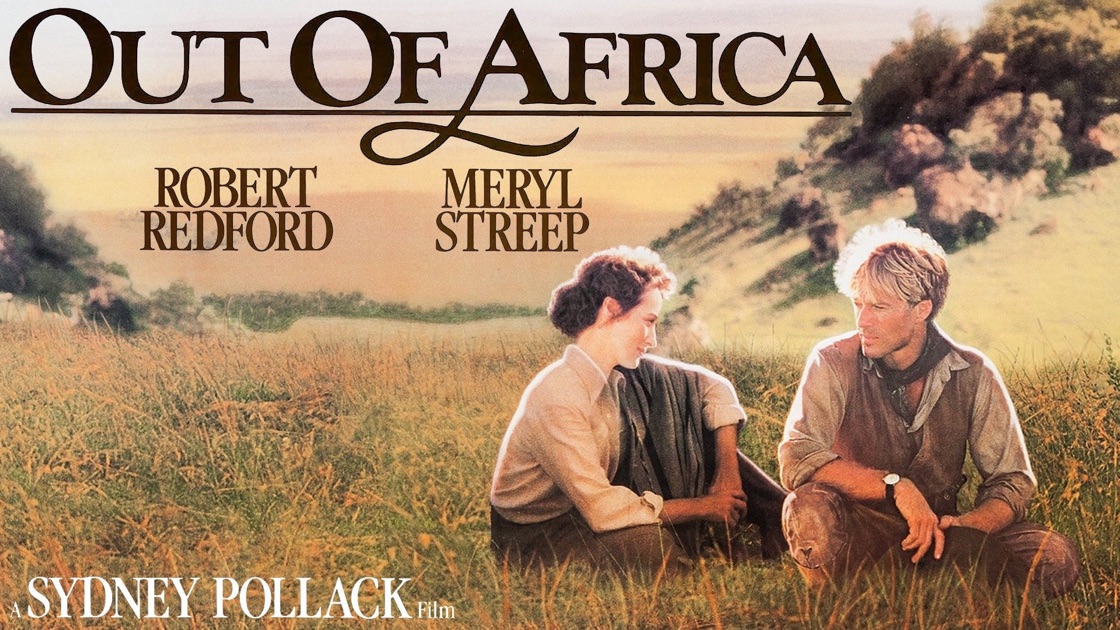 Out of Africa is a 1985 American epic romantic drama film directed and produced by Sydney Pollack, and starring Meryl Streep and Robert Redford. The film is based loosely on the 1937 autobiographical book Out of Africa written by Isak Dinesen (the pseudonym of Danish author Karen Blixen), with additional material from Dinesen's 1960 book Shadows on the Grass and other sources.

The book was adapted into a screenplay by the writer Kurt Luedtke, and filmed in 1984. Streep played Karen Blixen, Redford played Denys Finch Hatton, and Klaus Maria Brandauer played Baron Bror Blixen. Others in the film include Michael Kitchen as Berkeley Cole, Malick Bowens as Farah, Stephen Kinyanjui as the Chief, Michael Gough as Lord Delamere, Suzanna Hamilton as Felicity, and the model and actress Iman as Mariammo. The film received generally positive reviews from critics. It was also a commercial success and won seven Academy Awards including Best Picture and Best Director for Pollack.

Karen Blixen recalls her life in Africa where she moved in 1913 as an unmarried wealthy Dane. After having been spurned by her Swedish nobleman lover, she asks his brother, Baron Bror Blixen, to marry out of mutual convenience, and they move to the vicinity of Nairobi, British East Africa. Using her funds, he is to set up a dairy ranch, with her joining him a few months later, at which time they will marry. En route to Nairobi, her train is hailed by a big-game hunter named Denys Finch Hatton, who knows her fiancé and entrusts his haul of ivory to her. 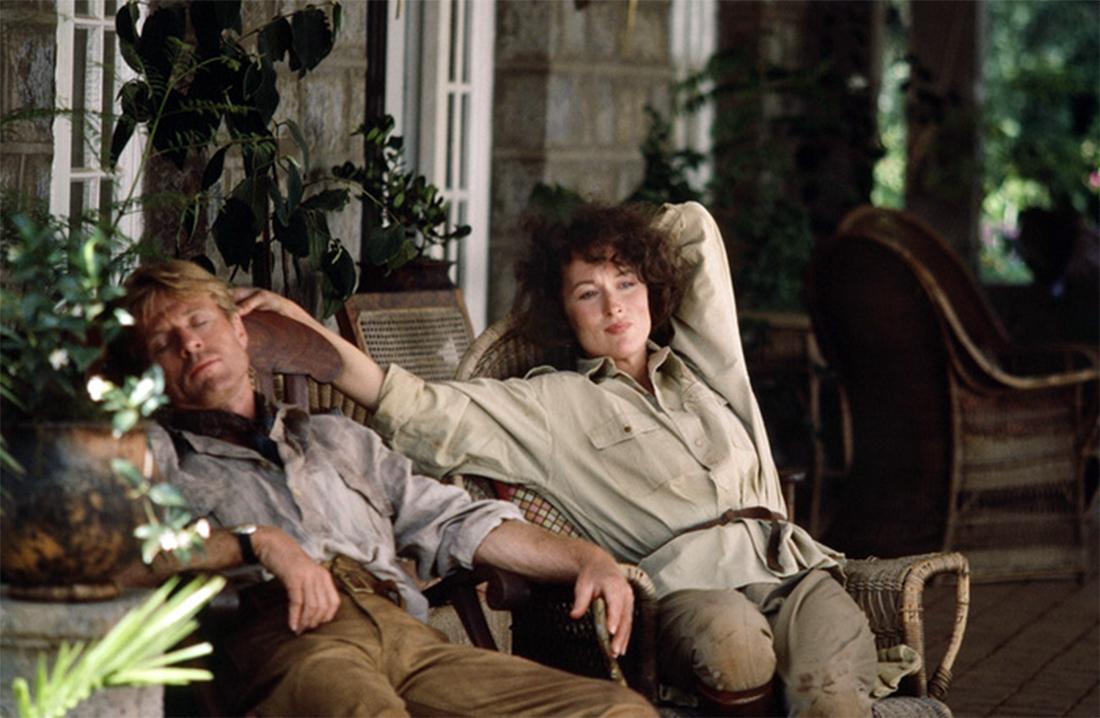 She is greeted at the railway station by Farah, the Somali headman hired by Bror, who is nowhere to be found. She is taken to the recently founded Muthaiga Club. She enters the men-only salon to ask for her husband and, because of her gender, is asked to leave. Karen and Bror marry before the day is out, and she becomes Baroness Blixen.

She then learns that Bror has changed their agreed-upon plan, and has spent her money to establish a coffee farm. She quickly learns that the farm is at too high an elevation to offer much of a chance of success. She needs Bror's help in building and managing this farm, but his interest is more in guiding game hunting safaris than in farming. 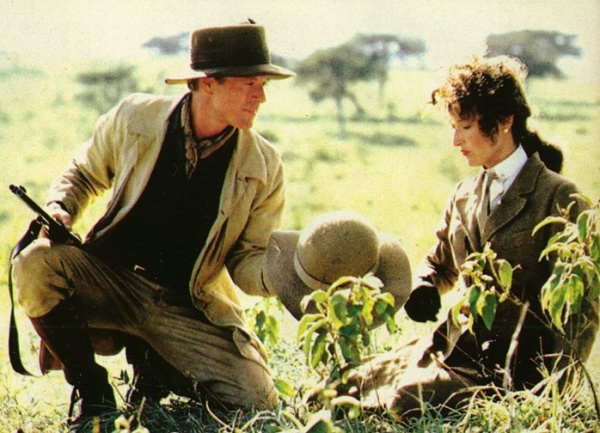 Karen comes to love Africa and the African people, and is taken in by the breathtaking view of the nearby Ngong Hills and the Great Rift Valley beyond. Meanwhile, she looks after the Kikuyu people who are squatting on her land. Among other things, she establishes a school, helps with their medical needs, and arbitrates their disputes. She also attempts to establish a formal European homelife on par with the other upper class colonists in the area. Meanwhile, she becomes friends with a young woman, Felicity (whose character is based on a young Beryl Markham). Eventually, Karen and Bror develop feelings for each other. But Bror continues to pursue other sexual relationships because their marriage is still a partnership based on convenience. 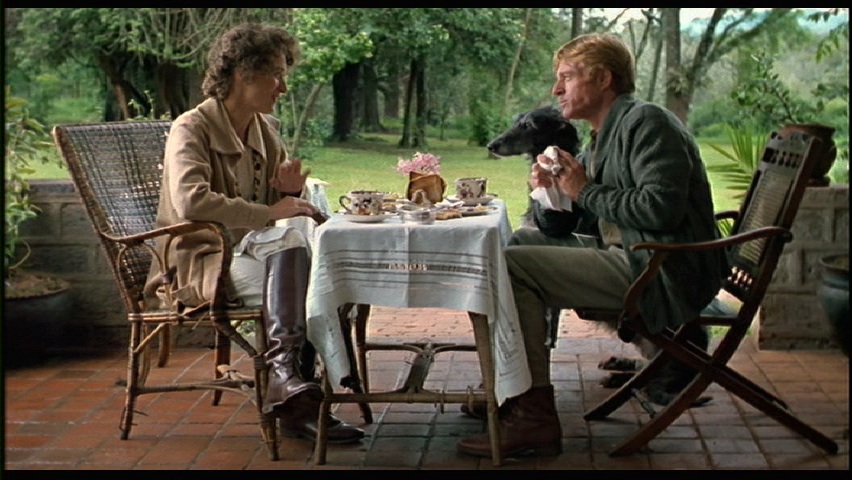 As the First World War reaches East Africa, the colonists form a militia led by the colonial patriarch Lord Delamere, which includes Denys and Bror among their number. A military expedition sets out in search of the forces from the neighboring German colony of German East Africa. Responding to the militia's need for supplies, Karen leads a difficult expedition to find them and returns safely. Shortly after the end of the war, in the evenings, Karen makes up exotic and imaginative stories to entertain her visitors.

Karen discovers that Bror has given her syphilis. As she is unable to receive proper treatment in Nairobi, she returns to Denmark for treatment and recuperation. Bror agrees to manage the farm while she is away. When she returns, now unable to bear children, Bror resumes his safari work and they begin to live separately.

The relationship between Karen and Denys develops, and he comes to live with her. Denys acquires a Gipsy Moth biplane and often takes Karen flying. Karen and Bror get a divorce on the grounds of Bror's infidelity. When Karen learns that Denys has taken one of her female acquaintances on a private safari, Karen comes to realize that Denys does not share her desire for a monogamous, domestic relationship. He assures her that when he is with her he wants to be with her, and states that a marriage is immaterial to their relationship. Eventually, this drives them apart and, refusing to be tied down, he moves out.

The farm eventually yields a good harvest, but a fire destroys much of the farm and factory, forcing her to sell out. She prepares for her departure from Kenya to Denmark by appealing to the incoming governor to provide land for her Kikuyu workers to allow them to stay together, and by selling most of her remaining possessions at a rummage sale. Denys visits the now-empty house and Karen comments that the house should have been (empty) all-along and, as with her other efforts, the returning of things to their natural state is as it should be. Denys says that he was just getting used to her things.

As he is about to depart for a safari scouting trip in his airplane, they agree that the following Friday he will return and fly her to Mombasa; with Karen then continuing on to Denmark. Friday comes and Denys does not appear. Bror then arrives to tell her that Denys' biplane has crashed and burned in Tsavo. During Denys' funeral, Karen recites an excerpt of a poem by A. E. Housman about a lauded athlete dying young who, as with Denys, is not fated to decline into old age. Later, as she is about to depart, she goes to the Muthaiga Club to complete arrangements for forwarding any mail. The members, having come to admire her, invite her into the men-only salon for a toast. At the railway station, she gives Farah the compass that Denys had given to her, and says goodbye to Farah, then turns back to ask him to say her name so she can hear his voice one last time. Later, Farah writes to Karen in Denmark, telling her that a pair of lions often visit Denys' grave.

As the movie ends, the on-screen narrative notes that Karen later became a published author under the pen name Isak Dinesen. Among her work is the memoir about her experiences in Africa, Out of Africa, the first line from which is used to introduce this film. She never returned to Africa.