CONSPIRACY NIGHT AT THE MOVIES: Ace In The Hole

An excellent portrayal of how the mind is held captive by the media and the lengths people will go to hold minds in bondage. The film was a box office failure. It told the truth. That broke the illusion that holds thing together. 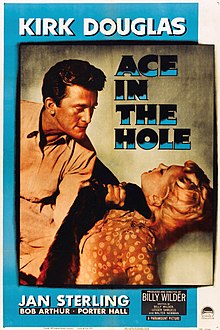 Ace in the Hole, also known as The Big Carnival, is a 1951 American film noir starring Kirk Douglas as a cynical, disgraced reporter who stops at nothing to try to regain a job on a major newspaper. The film co-stars Jan Sterling and features Robert Arthur and Porter Hall.

Chuck Tatum (Kirk Douglas) is a fiercely ambitious, self-centered, newly sober reporter whose career has fallen into notoriety and decline. He has come west to New Mexico from New York City in a broken-down car, out of money and options. The charismatic Tatum talks his way into a reporting job with Boot (Porter Hall), the publisher for the tiny Albuquerque Sun-Bulletin. Tatum asks if Mr. Boot would like to make $200 a week, saying "Mr. Boot, I'm a 250 dollar a week newspaperman. I can be had for $50." Boot says, "In this shop we pay $60 a week" and brings Tatum on. However, he remains skeptical of his new hire.

Tatum stays sober and works there uneventfully for a year. Then while unhappily on assignment to cover a rattlesnake hunt, he learns about Leo Minosa (Richard Benedict), a local man who has become trapped in a cave collapse while gathering ancient Indian artifacts.

Sensing a golden opportunity, Tatum manipulates the rescue effort, forming an alliance with Kretzer, an unscrupulous sheriff, by depicting him favorably in the newspaper to ensure Kretzer's re-election. The pair coerce the construction contractor charged with the rescue into drilling from above, rather than the quicker method of shoring up the existing passages, so that Tatum can prolong his own stay on the front pages of newspapers nationwide. Tatum also directs Kretzer to prevent any other reporters from encroaching on the story, keeping it as his exclusive.

Lorraine (Jan Sterling), the victim's wife, goes along with the reporter's scheme. She is eager to leave Leo and their struggling business, a combination trading post and restaurant in the middle of nowhere. Thanks to the publicity Tatum generates, she experiences a financial windfall, particularly from thousands of tourists who come to witness the rescue.

Herbie Cook (Robert Arthur), the newspaper's young photographer initially on assignment with Leo, slowly loses his idealism as he follows Tatum's lead and envisions himself selling pictures to Look or Life. Boot makes a surprise visit to Tatum and tries to talk some sense into him and Herbie but is rebuffed by Tatum, who quits on the spot, having sold the exclusive rights to his copy to a New York editor for $1000 per day and, more importantly, his old job back.

Thousands flock to the town. The rescue site literally becomes an all-day carnival with rides, entertainment, games and songs about Leo. Tatum sets up shop at the trading post and begins drinking again. He takes up with Lorraine and is greeted heroically by the crowd each time he returns from visiting Leo in the cave.

After five days of drilling, things get worse. A visiting doctor diagnoses Leo with a grim bout of pneumonia. His only chance for survival is by being rescued in 12 hours. Remorseful, Tatum sends a news flash, saying that Leo will now be rescued by shoring up the cave walls during the 12-hour period. But when he speaks to the contractor, he learns that the vibration from drilling has made this impossible.

Tatum's mistreatment of Lorraine reaches its boiling point with his physical and mental abuse, leading her to stab him in self-defense with a pair of scissors, mortally wounding him. Tatum gets the local priest, and takes him into the cave to administer the Last Rites. Leo subsequently dies and Tatum, guilt ridden over what's transpired, orders the crew to stop drilling. Tatum announces to the crowd that Leo has died, telling them to pack up and leave. Subsequently, many of the reporters that have come to the town, former colleagues with contempt for Tatum already, immediately get on their newswires and report Leo's death. As the carnival breaks down, the public packs up and moves out en masse, Lorraine is amongst the departing as she misses her bus and tries hitching a ride with one of the passing cars. 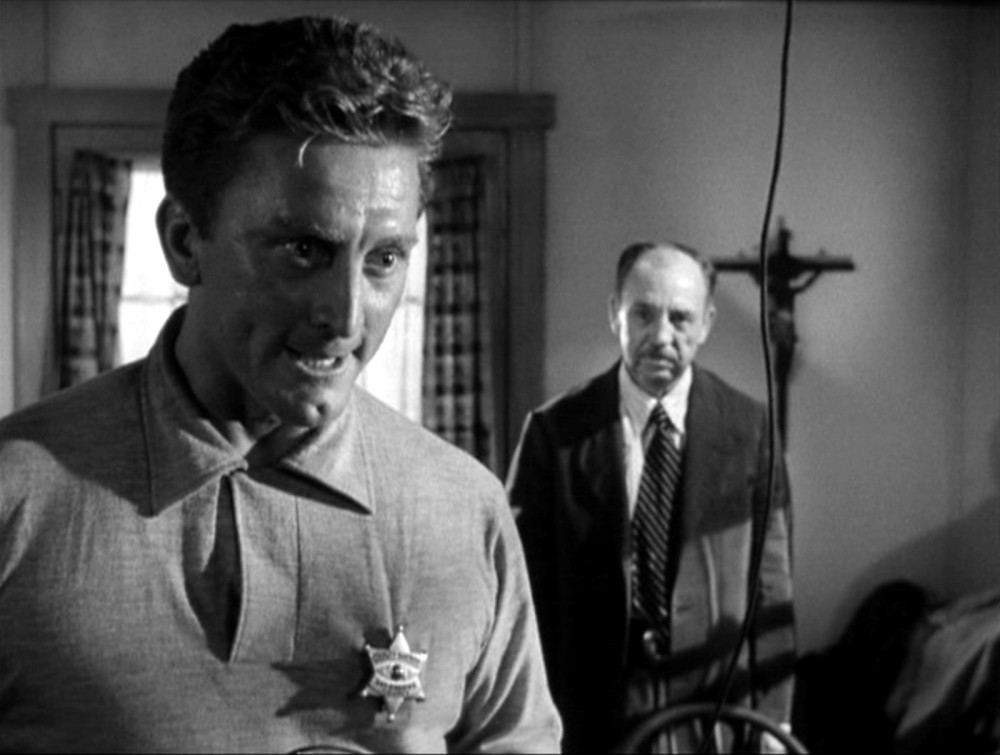 Tatum has neglected to send copy to the New York editor, who is furious that other newspapers have hit the streets with the news about Leo's death. Tatum is fired and the rival reporters come to Tatum's room to gloat before he kicks them out. Drunk and dying, Tatum calls the editor and tries to confess to killing Leo by delaying the rescue, but the editor hangs up on him. Tatum corrals Herbie into leaving immediately in their car and they barely reach the Albuquerque Sun-Bulletin. Tatum makes a dramatic entrance into the paper's offices, calling for Boot. Tatum asks him "How'd you like to make yourself a thousand dollars a day, Mr. Boot? I'm a thousand dollar a day newspaperman. You can have me for nothin'." Tatum then falls dead to the floor.