CONSPIRACY NIGHT AT THE MOVIES: War of the Worlds

This is a timely film after the Roswell event and the 1952 Washington merry-go-round where the UFO's buzzed The White House. I think it provides a clear picture of the technology and resources we had and faced. There was no option but surrender. I believe we are an occupied planet. Our leaders, the military, the defense industry, the intelligence agencies, and the media are under the control of a force of some sort to be sure. Time invaders from the future seems to explain our circumstances best. Prayer may be our best solution. 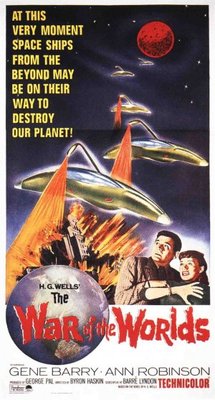 The War of the Worlds (also known in promotional material as H. G. Wells' The War of the Worlds) is a 1953 American Technicolor science fiction film drama from Paramount Pictures, produced by George Pal, directed by Byron Haskin, and starring Gene Barry and Ann Robinson.

The film is a loose adaptation of the novel of the same name by H. G. Wells, the first of five film adaptations. It is a modern retelling of the 1897 novel, changing the setting from Victorian era-England to 1953 southern California. Earth is suddenly and unexpectedly invaded by Martians and American scientist Clayton Forrester searches for any weakness that can stop them.

The War of the Worlds won an Academy Award for Best Visual Effects and went on to influence other science fiction films. In 2011, it was selected for preservation in the United States' National Film Registry in the Library of Congress, being deemed "culturally, historically, or aesthetically significant".

In southern California, Dr. Clayton Forrester, a well-known atomic scientist, is fishing with colleagues when a large object crashes near the town of Linda Rosa. At the impact site, he meets USC library science instructor Sylvia Van Buren and her uncle, Pastor Matthew Collins. Later that night, a round hatch on the object unscrews and opens; a Martian weapon disintegrates the three men standing guard at the site, simultaneously shutting down all technology in the town with an electromagnetic pulse. The United States Marine Corps surround the crash site as reports pour in of identical objects landing all over the world and destroying cities. Pastor Collins attempts to make contact with the Martians, but is also disintegrated. The Martian war machines effortlessly defeat the military with their "Heat-Ray" and "skeleton beam" weapons.

Attempting to escape in a military spotter plane, Forrester and Sylvia crash land and hide in an abandoned farm house. They begin to develop closer feelings for each other just before the house is buried by yet another crashing cylinder. They encounter and dismember an "electronic eye" on a long cable from a nearby hovering Martian machine, and collect a blood sample from a Martian wounded by Forrester with an axe while protecting Sylvia. They manage to escape unseen just before the farm house is obliterated. Forrester takes the camera housing and blood samples to his team at Pacific Tech, in the hopes of finding a way to defeat the invaders.

Many of the major world capitals are destroyed by the Martians, and the United States government makes the decision to drop the atomic bomb. The Martians' force shields, however, prove impervious to the bomb's destructive power.

As the Martians advance on Los Angeles unopposed, the city is evacuated, and many of the inhabitants flee to the nearby mountains. Forrester, Sylvia, and the Pacific Tech team become separated in the chaos, and their scientific equipment is stolen or destroyed. Forrester searches for Sylvia in the city. Based on a story she had told him earlier, he guesses that she would take refuge in a church. After searching through several, he finds Sylvia among many praying survivors. Just as the Martians strike the church, their machines suddenly lose power and crash, one after another. Forrester witnesses one Martian dying as it tries to leave its fighting machine, noting that they were "all praying for a miracle".

In voice-over, the film's narrator observes that while the Martians were impervious to humanity's weapons, they had "...no resistance to the bacteria in our atmosphere to which we have long since become immune. ... After all that men could do had failed, the Martians were destroyed and humanity was saved by the littlest things, which God, in His wisdom, had put upon this Earth..."