CONSPIRACY NIGHT AT THE MOVIES: Outland 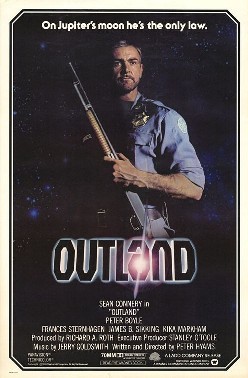 Set on Jupiter's moon Io, it has been described as a space Western, and bears thematic resemblances to the 1952 film High Noon. In the future, Federal Marshal William O'Niel (Sean Connery) is assigned to a tour of duty at the titanium ore mining outpost 'Con-Am 27' operated by the company Conglomerates Amalgamated, on the Jovian moon of Io. Conditions on Io are difficult: gravity is 1/6 that of Earth's with no breathable atmosphere, spacesuits are cumbersome, and miners carry their own air supply. Shifts are long, but significant bonuses are paid. Con-Amalgamated mining franchise general manager Mark Sheppard (Peter Boyle) boasts that since he took over the running of Io, productivity has broken all previous records.

Carol O'Niel (Kika Markham) feels she cannot raise their son Paul to live inside a sterile environment far from Earth and with little to do. She takes Paul and flees to the space station serving Io, awaiting a shuttle back to Earth.

A miner named Tarlow (John Ratzenberger) suffers an attack of stimulant psychosis: he sees spiders and rips open his spacesuit, resulting in his death by explosive decompression. Cane, another miner, enters an elevator without his spacesuit during an apparent psychotic episode, and likewise dies from decompression.

With the reluctant assistance of Dr. Lazarus (Frances Sternhagen), O'Niel investigates the deaths. Another incident involves a worker, Sagan, who takes a prostitute hostage and threatens to kill her with a knife. O'Niel attempts to calm the man while Montone (James B. Sikking), O'Niel's sergeant, sneaks in via the air duct. Montone kills Sagan with a shotgun.

O'Niel and Lazarus discover that Sagan had traces of a highly powerful amphetamine-type drug in his bloodstream, which would allow the miners to work continuously for days at a time, until they "burn out" and turn psychotic after approximately 10 months of use. O'Niel uncovers a drug distribution ring run by a corrupt Sheppard and sanctioned by Montone.

Using surveillance cameras, O'Niel finds and captures one of Sheppard's dealers, Nicholas Spota; but before Spota can be questioned, he is killed. Montone is then found garroted. O'Niel finds the latest shipment of drugs in a meat locker that was shipped from the Jupiter space station, but then he's attacked by one of the other dealers, Russell Yario. O'Niel knocks him out, then destroys the highly valuable shipment of drugs. When Sheppard finds out, he threatens O'Niel and then contacts his drug distributor, asking him to send in professional hitmen. O'Niel is ready, though, having been monitoring Sheppard's communications.

O'Niel waits as a digital clock counts down the time for the arrival of a supply shuttle from the other side of Jupiter. Knowing the assassins are on their way, and with only Dr. Lazarus willing to help him, as his "last act" O'Niel sends a message to his wife Carol (Markham) and his son Paul, promising to return to Earth when his "job is done." 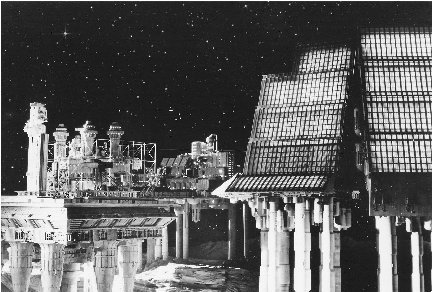 When the hitmen arrive, O'Niel tracks and ambushes each, killing them one by one. Lazarus helps him kill the first by trapping him in a pressurized corridor. O'Niel (outside in a spacesuit) activates a bomb, causing an explosive decompression that kills the hitman. The second assassin is killed in the greenhouse structure when O'Niel drops a hatch cover down the outside of the greenhouse. Thinking it is O'Niel, the hitman shoots the window, causing it to crack and then burst, which blows him out to his death, disintegrating his body.

O'Niel is then confronted by Sheppard's "inside man," who turns out to be one of his own deputies, Sgt. Ballard. The two fight outside the station at the satellite power panel structure until O'Niel pulls Ballard's oxygen hose, suffocating him. O'Niel then confronts the surprised Sheppard in the base recreation bar, knocking him out with one punch. It is implied that Sheppard will now either be murdered by his own accomplices or brought to justice, while O´Niel´s deputies will be brought to trial for mutiny.

O'Niel retires, thanks and says farewell to Dr. Lazarus and leaves on the shuttle to join his wife and son on the journey back to Earth.