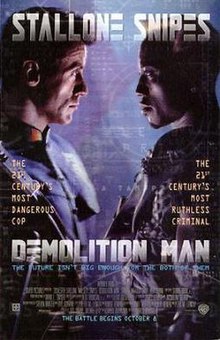 Demolition Man is a 1993 American Science fiction film directed by Marco Brambilla in his directorial debut. The film stars Sylvester Stallone and Wesley Snipes. The film was released in the United States on October 8, 1993.

The film tells the story of two men: an evil crime lord and a risk-taking police officer. Cryogenically frozen in 1996, they are restored to life in the year 2032 to find mainstream society changed and all crime seemingly eliminated.

In 1996, LAPD Sgt. John Spartan leads a Special Operations unit on an unauthorized mission to rescue hostages taken by the psychopathic career criminal Simon Phoenix and his henchmen. After a thermal scan reveals no sign of the hostages, Spartan enters Phoenix's stronghold, and engages Phoenix's men and captures Phoenix himself, who before his arrest has detonated several barrels of C4, destroying the building. The hostages' bodies are found in the rubble, Phoenix "pleads his regard", and Spartan is charged with their deaths. Both men are frozen in "CryoPrison" and exposed to subconscious rehabilitation techniques.

In 2032, 22 years after 2010 "Great Earthquake", the former cities of Los Angeles, San Diego and Santa Barbara have merged into a pseudo-utopian San Angeles, under the pseudo-pacifist guidance and control of a Dr. Raymond Cocteau. Weapons and vices are outlawed, human behavior (sex, children, bad words, etc.) are prohibited or regulated, citizens carry implanted transceivers, and in the resulting absence of any violent crime, the San Angeles Police (SAPD) has lost any ability to handle violent behavior of any kind.

Phoenix is awakened for a parole hearing, kills the warden, armed guards and several peace officers, demonstrating super speed, strength, agility and martial arts skills. (He is also multi-lingual and proficient with future technology, and has acute sensory skills.) Veteran officer Zachary Lamb suggests that Spartan be revived and reinstated to the force to help them capture Phoenix. Lieutenant Lenina Huxley is assigned to assist Spartan in his transition.

The revived Spartan has trouble adapting to life in the future. Most of Huxley's fellow officers perceive Spartan as thuggish and uncivilized. In the meantime, the white-robed Dr. Cocteau has recruited Phoenix to kill Friendly, the foremost figure among an underground tribe of uncontrolled individuals - free humans that Cocteau sees as the threat to the narcotized society he has created. 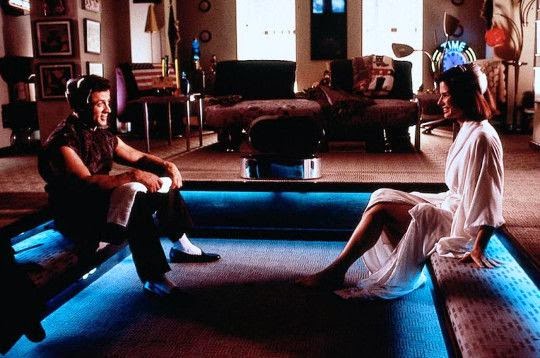 The first Spartan-Phoenix confrontation is at the "Museum of Antiquities" weapon exhibit, where Phoenix goes to arm himself, as Spartan deduced he will. Phoenix evades Spartan and encounters Dr. Cocteau, whom he tries to shoot, but he is programmed against that ability. Cocteau reminds him of why he was revived: to kill Edgar Friendly, the ragtag leader of the "Scraps"—resistance fighters living in the ruins beneath San Angeles. In a subsequent encounter, Dr. Cocteau adds Spartan to his hit list for Phoenix, and agrees to given him the territory of Santa Monica upon completion. Spartan and Huxley learn of this and that Dr. Cocteau is "an evil Mr. Rogers" rather than San Angeles's saintly god-king. He had programmed Phoenix to make him a more capable, dangerous maniac, and to use him as an assassin to eliminate Friendly. While Spartan, Huxley and young officer Alfredo Garcia enter the underground city to warn Friendly, Phoenix confronts Cocteau and demands that he release a list of other prisoners to assist him.

At Friendly's base, Phoenix and an irredeemable supplement of recruits attempt to kill both Spartan and Friendly, whom Spartan and Huxley have joined underground. They escape in a 1970 Oldsmobile 442. In a communication during the car chase, Phoenix reveals that the hostages Spartan tried to rescue from him in their 1990s encounter were dead before the building exploded: Spartan was innocent of any crime and was terminated (frozen) for nothing. Phoenix escapes. Friendly, recruiting Garcia, leads the Scraps from the underground to join the police against Phoenix and his gang.

Phoenix orders the gang to kill Cocteau, which his programming prevents him from doing directly. Spartan and Huxley arrive at Cocteau's headquarters to capture Phoenix and his accomplices. Phoenix escapes to the prison to revive (defrost) and recruit even more dangerous convicts. After knocking out Huxley to protect her, Spartan enters the prison to confront Phoenix. Spartan uses a cryotube to freeze Phoenix solid, destroys Phoenix by knocking his head off, and escapes as the cryomachinery overloads, destroying the prison. With Cocteau dead and the prison destroyed, the police and the Scraps find themselves at odds over how to begin the framework for their new society. Spartan suggests that they find a way to compromise between order and personal freedom, then kisses Huxley and departs with her.