CONSPIRACY NIGHT AT THE MOVIES: The Thomas Crown Affair

The Thomas Crown Affair is a DeLuxe Color 1968 film directed and produced by Norman Jewison starring Steve McQueen and Faye Dunaway. It was nominated for two Academy Awards, winning Best Original Song for Michel Legrand's "Windmills of Your Mind". A remake was released in 1999.

Thomas Crown (Steve McQueen), a millionaire businessman and sportsman, pulls off a perfect crime by having five men rob $2,660,527.62 from a Boston bank and dump the money in a cemetery trash can. Thomas never meets any of the five face-to-face, before or after the crime, and they do not know each other. He retrieves the money and deposits it anonymously at a bank in Geneva. Vicki Anderson (Faye Dunaway), an independent insurance investigator, is contracted to investigate the heist and will receive a percentage of the stolen money if she recovers it. When Thomas comes to her attention as a possible suspect, she intuitively recognizes him as the mastermind behind the robbery.

Thomas does not need the money, and in fact masterminded the robbery as a diversion of sorts. He plays polo and golf, flies a glider, and drives a dune buggy but suffers from general boredom. Vicki makes it clear to him that she knows that he is the thief and intends to prove it. They start a game of cat and mouse, with the attraction between them evident, and their relationship soon evolves into an affair, complicated by Vicki's vow to find the money and help Detective Eddie Malone (Paul Burke) bring the guilty party to justice. A reward offer entices the wife of the bank robbery's getaway driver, Erwin Weaver (Jack Weston), to "fink" on him. Vicki finds out that he was hired by a man he never saw, but whose voice he hears. She tries putting Erwin in the same room as Thomas, but there is no hint of recognition on either one's part. However, Vicki is clearly closing in on Thomas. 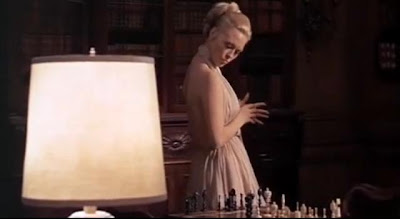 Thomas organizes another robbery exactly like the first with different accomplices and tells Vicki where the "drop" will be, because he has to know for sure that she is on his side. The robbery is successful, but there are gunshots and the viewer is left with the impression that people might have been killed, raising the stakes for Vicki's decision.

Vicki and the police stake out the cemetery, where they watch one of the robbers make the drop, and wait for Thomas to show up so they can arrest him, but when his Rolls Royce arrives, she sees that Thomas has sent a messenger in his place, with a telegram asking her to bring the money and join him — or else keep the Rolls Royce as a gift. She tears the telegram to bits and throws the pieces to the wind, looking up at the sky with tears in her eyes. Crown flies away in a jet.