CONSPIRACY NIGHT AT THE MOVIES: The Formula 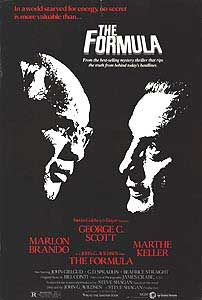 Can't vouch for these anymore.

The Formula is a mystery film directed by John G. Avildsen released by Metro-Goldwyn-Mayer in 1980. It features a preeminent cast including George C. Scott, Marlon Brando, John Gielgud, and Marthe Keller. Craig T. Nelson also makes a brief appearance as a geologist.

The film opens in the final days of World War II as the Russians are on the outskirts of Berlin. A German SS general (Richard Lynch) is dispatched to the Swiss border with top secret materials, with orders to hide them from the Allies.

In contemporary Los Angeles, Lt. Barney Caine (George C. Scott) is assigned to solve the murder of his former boss and friend Tom Neeley. The scene is made to look like a drug deal gone wrong. However, Neeley has written 'Gene' on a newspaper in his own blood, and Caine finds a map of Germany with the name 'Obermann' on it. Caine is surprised to learn that Neeley provided drugs at parties hosted by the tycoon Adam Steiffel (Marlon Brando). When he interviews Neeley's ex-wife (Beatrice Straight), he quickly catches her in several lies, and when he returns to interview her a second time, he finds her shot dead in her hot tub.

Steiffel reveals in his interview that Neeley was working for him as a bagman, executing all the bribes (Baksheesh) that are required of an American energy firm to operate in the Middle East. He sent Neeley overseas frequently to distribute money to business partners. He makes reference to a formula for a catalyst that converts coal into petroleum and claimed that the Nazis had relied heavily on their coal reserves and the formula to fuel their war efforts, given their lack of petroleum resources. Steiffel asserts that the formula has been kept secret by the powerful oil cartel, which would lose power if coal-rich countries like the United States could simply rely on their natural resources. Caine becomes convinced he must go to Germany to solve Neeley's murder, and after he convinces his Chief (Alan North) to allow him to pursue the investigation in Europe, the Chief is seen phoning one of Steiffel's cronies (G. D. Spradlin) to tell him that Caine has taken the bait.

Once in Berlin, Caine meets up with Paul Obermann (David Byrd) at the Berlin Zoo. Olbermann explains that the formula was in fact real, and the Nazis hid it as the war ended in an operation code-named 'Genesis'. This confirms Caine's hunch that Neeley was killed over the formula, rather than a drug deal. Obermann is murdered outside the zoo, and back at his apartment, his niece Lisa (Marthe Keller) shows up to be interviewed by the police. At Obermann's memorial service, Caine asks Lisa to accompany him on his investigation, acting as his interpreter. She agrees and they follow up on a lead that Obermann gave him regarding Professor Siebold who worked on the formula.

During their interview with Siebold, he reveals that the inventor of the formula, Dr. Abraham Esau (John Gielgud), is still alive. After they leave his apartment, Siebold is shot in the head through a window. On their way to visit Esau, Lisa and Caine sleep together. When they meet up with Esau, he writes down the formula for Caine, after he makes Caine promise to make it public. Lisa and Caine make photocopies and send them to the LAPD and a Swiss energy company. Caine also hides two copies from Lisa, depositing them in the hotel's safe. In a subsequent scene, he reveals that he has deduced that she is not Obermann's niece at all, but a spy sent to keep tabs on him. She admits it, but claims she didn't sleep with him because of her orders. 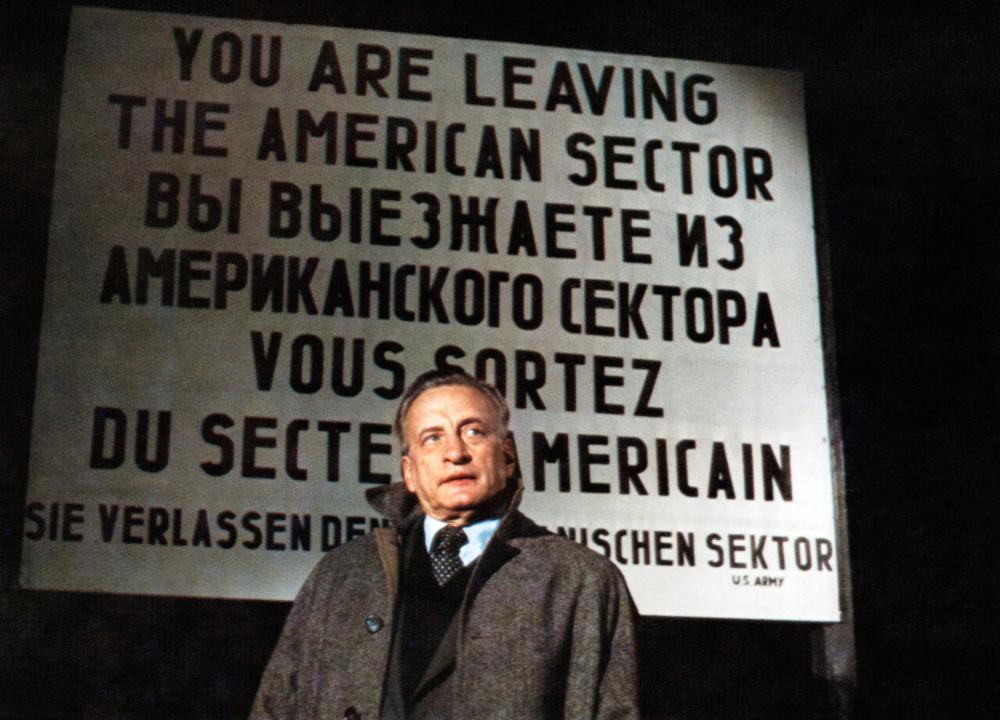 At the border with East Berlin, Caine confronts the assassin who killed the Neeleys, who reveals Steiffel ordered their murders. Lisa kills the assassin to prove she wasn't lying about her feelings for Caine, and then she flees into East Berlin. At the airport before flying home to Los Angeles, Caine realizes the two copies of the formula in the hotel safe were replaced with fakes by Lisa, and that the only real copies are with the LAPD and the Swiss.

After landing in Los Angeles, he heads straight to Steiffel's office. Steiffel has kidnapped Caine's partner (Yosuta) and is holding him for ransom, that is, for the copy of the formula that Caine had received from Esau.

Steiffel gives a speech about the reason that the "cartel" for which he works has been keeping the formula secret since 1945. The cartel's plan is to keep the formula secret until it has acquired control of the planet's coal reserves which -- to the possessor of the formula -- will be worth their weight in gold when the world runs out of oil. They had been able to keep it secret until a Swiss business man named Tauber began searching for the members of the original Genesis team, in the hopes of reconstituting the team and recreating the formula. This made the (now aged) members of the Genesis team a liability to the cartel, so Steiffel had pulled strings to get Caine sent on a trip to Germany. The plan was that Caine's trip would serve (somehow!) as a cover for the cartel's plot to eliminate all of the remaining members of the Genesis team. Caine offers to turn over the original copy of the formula (which he had got from Esau) in return for the release of his partner Yosuta. Steiffel agrees, and Yosuta is released.

Just before leaving, Caine reveals that he sent the formula to the Swiss business man Tauber.

Afer Caine has left, Steiffel rifles through his rolodex for a business card and makes a phone call to the Swiss business man (Tauber) to whom Caine sent the formula. He asks Tauber to keep the formula secret for another 10 years (during which time the cartel can acquire more coal fields, and the price of oil will continue to increase) in exchange for a 30% share of his anthracite (i.e. coal) holdings. They negotiate briefly, and the Swiss executive agrees to hold off on producing petroleum with the formula.

The film is noteworthy as being one of the first films to deal with the issue of peak oil and the global collapse of economies based on fossil fuels. In this, it is similar to Rollover which dealt with the possibility of a collapse of global financial markets.