CONSPIRACY NIGHT AT THE MOVIES: Massacre In Rome (1973) War film. 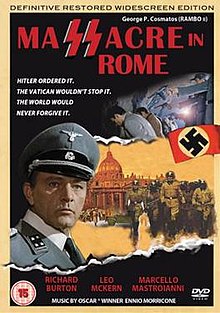 Massacre in Rome (Italian: Rappresaglia) is a 1973 film directed by George Pan Cosmatos[1] about the Ardeatine massacre which occurred at the Ardeatine caves in Rome, 24 March 1944, committed by the Germans as a reprisal for a partisan attack.

The film stars Richard Burton as the Gestapo chief Herbert Kappler who carries out the killings of 330 mostly randomly and hurriedly selected victims in revenge for partisans killing 33 Germans: using a ratio of ten Italian victims for every German. Meanwhile, the Vatican stands by and issues no condemnation. A Tagline summized the complete story: "Hitler ordered it. The Vatican wouldn't stop it. The world would not forgive it".

The film is based on the book Death in Rome (1973) by Robert Katz, who did the screenplay with Cosmatos. It would also feature the names of the dead victims in the closing credits, as opposed to showing the credits of stars and movie crew members who made the film.

Differences between the film and actual events

Herbert Kappler is depicted in the film as being a tired worn out man, who is disillusioned with the Nazi cause and believes that the fall of Nazi Germany is imminent. In reality, Kappler was a zealous Nazi and was sent to Rome for exactly this reason. During his time as head of the Sicherheitspolizei (Security Police) in Rome, Kappler organized the round-ups of thousands of innocent victims, oversaw raids on Jewish homes for looted valuables, and was a key figure in transporting Italian Jews to Nazi death camps.

Father Pietro Antonelli is a combination of several different Vatican officials who personally knew Kappler, the most significant of whom was Monsignor Hugh O'Flaherty (who appears in the film The Scarlet and the Black). One prisoner, a deserter from the Austrian army who had pretended to be an Italian, was allowed to live, as a citizen of the Reich; and he was the only witness to tell the tale of the courageous behavior of the Resistance priest, Don Pietro Pappagallo, who blessed those about to be killed, before himself meeting his fate.

The SS victims of the partisan attack are referred to throughout the film as "German soldiers", when in fact the company which was attacked was part of the "Battalion Bozen", which was composed of ethnic Austrians from the German-speaking area of South Tyrol annexed by Italy after the First World War.

Kurt Mälzer is shown throughout the film giving direct orders to SS units and personally supervising the buildup to the massacre organized by Kappler. In reality, while several regular Wehrmacht officers did issue orders to the SS during this period, as well as Kappler and Mälzer personally discussing the operation, Kappler and his men were under the SS and Police Leader chain of command, and it was through these channels that most of the official orders concerning the massacre were issued. Another man working with the SS was Capt. Erich Priebke, who is mentioned in the film. He had full knowledge of the massacre, but would hide for many years evading justice. Then, on Nationwide TV in the 1990s, ABC News reporter Sam Donaldson found and confronted him about the massacre. Argentenian authorites arrested and deported him and in Italy, he was tried and convicted of mass murder.

Colonel Dollmann was never Kappler's direct superior, as is implied several times in the film. In reality, Kappler answered to the office of SS-Obergruppenführer Karl Wolff, who also maintained his headquarters in Rome. Wolff is never seen or mentioned in the film. In reality, he stood trial and was found guilty of killing Italian Jews as part of the operations in Italy: when he became sick, his sentence was reduced and he was released in 1971.

At the time of the massacre, Herbert Kappler was 37 years old. Actor Richard Burton was just short of his 48th birthday when the film was produced, eleven years older than Kappler would have been at the time.