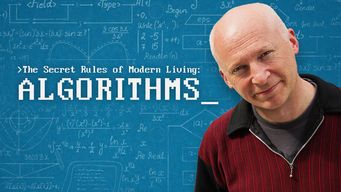 Without us noticing, modern life has been taken over. Algorithms run everything from search engines on the internet to satnavs and credit card data security - they even help us travel the world, find love and save lives.

Mathematician Professor Marcus du Sautoy demystifies the hidden world of algorithms. By showing us some of the algorithms most essential to our lives, he reveals where these 2,000-year-old problem solvers came from, how they work, what they have achieved and how they are now so advanced they can even programme themselves.

In mathematics and computer science, an algorithm is a sequence of instructions, typically to solve a class of problems or perform a computation. Algorithms are unambiguous specifications for performing calculation, data processing, automated reasoning, and other tasks.

As an effective method, an algorithm can be expressed within a finite amount of space and time and in a well-defined formal language for calculating a function. Starting from an initial state and initial input (perhaps empty), the instructions describe a computation that, when executed, proceeds through a finite number of well-defined successive states, eventually producing "output" and terminating at a final ending state. The transition from one state to the next is not necessarily deterministic; some algorithms, known as randomized algorithms, incorporate random input.

The concept of algorithm has existed for centuries. Greek mathematicians used algorithms in the sieve of Eratosthenes for finding prime numbers, and the Euclidean algorithm for finding the greatest common divisor of two numbers.

The word algorithm itself is derived from the 9th-century mathematician Muḥammad ibn Mūsā al-Khwārizmī, Latinized Algoritmi. A partial formalization of what would become the modern concept of algorithm began with attempts to solve the Entscheidungsproblem (decision problem) posed by David Hilbert in 1928. Later formalizations were framed as attempts to define "effective calculability" or "effective method". Those formalizations included the Gödel–Herbrand–Kleene recursive functions of 1930, 1934 and 1935, Alonzo Church's lambda calculus of 1936, Emil Post's Formulation 1 of 1936, and Alan Turing's Turing machines of 1936–37 and 1939.