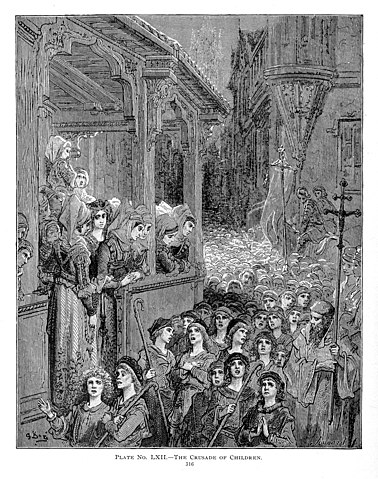 The 'Children's Crusade' was a failed popular crusade by European Christians to regain the Holy Land from the Muslims, said to have taken place in 1212. The crusaders left areas of Northern France, led by Stephen of Cloyes, and Germany, led by Nicholas. The traditional narrative is likely conflated from some factual and mythical events which include the visions by a French boy and a German boy, an intention to peacefully convert Muslims in the Holy Land to Christianity, bands of children marching to Italy, and children being sold into slavery. Many children were tricked by merchants and sailed over to what they thought were the holy lands but, in reality, were slave markets.

The variants of the long-standing story of the Children's Crusade have similar themes. A boy begins to preach in either France or Germany, claims that he had been visited by Jesus, who instructed him to lead a Crusade in order to peacefully convert Muslims to Christianity. Through a series of portents and miracles he gains a following of up to 30,000 children. He leads his followers south towards the Mediterranean Sea, in the belief that the sea would part on their arrival, which would allow him and his followers to walk to Jerusalem. This does not happen. The children are sold to two merchants (Hugh the Iron and William of Posqueres), who give free passage on boats to as many of the children as are willing. The pilgrims are then either taken to Tunisia, where they are sold into slavery by the merchants or else die in a shipwreck on San Pietro Island off Sardinia during a gale.

According to more recent researchers, there seem to have actually been two movements of people (of all ages) in 1212 in Germany and France. The similarities of the two allowed later chroniclers to combine and embellish the tales.

Nicholas of Cologne in Germany

In the first movement, Nicholas, an eloquent shepherd from the Rhineland in Germany, tried to lead a group across the Alps and into Italy in the early spring of 1212. Nicholas said that the sea would dry up before them and allow his followers to cross into the Holy Land. Rather than intending to fight the Saracens, he said that the Muslim kingdoms would be defeated when their citizens converted to Catholicism. His disciples went off to preach the call for the "Crusade" across the German lands, and they massed in Cologne after a few weeks. Splitting into two groups, the crowds took different roads through Switzerland. Two out of every three people on the journey died, while many others returned to their homes. About 7,000 arrived in Genoa in late August. They immediately marched to the harbor, expecting the sea to divide before them; when it did not many became bitterly disappointed. A few accused Nicholas of betraying them, while others settled down to wait for God to change his mind, since they believed that it was unthinkable he would not eventually do so. The Genovese authorities were impressed by the little band, and they offered citizenship to those who wished to settle in their city. Most of the would-be Crusaders took up this opportunity. Nicholas refused to say he was defeated and traveled to Pisa, his movement continuing to break up along the way. He and a few loyal followers continued to the Papal States, where they met Pope Innocent III. The remaining ones departed for Germany after the Pontiff exhorted them to be good and to return home to their families. Nicholas did not survive the second attempt across the Alps; back home his father was arrested and hanged under pressure from angry families whose relatives had perished while following the child.

Some of the most dedicated members of this Crusade were later reported to have wandered to Ancona and Brindisi; none are known to have reached the Holy Land.

Stephen of Cloyes in France

The second movement was led by a twelve-year-old French shepherd boy named Stephen of Cloyes, who said in June that he bore a letter for the king of France from Jesus. Large gangs of youth around his age were drawn to him, most of whom claimed to possess special gifts of God and thought themselves miracle workers. Attracting a following of over 30,000 adults and children, he went to Saint-Denis, where he was reported to cause miracles. On the orders of Philip II, advised by the University of Paris, the people were implored to return home. Philip himself did not appear impressed, especially since his unexpected visitors were led by a mere child, and refused to take them seriously. Stephen, however, was not dissuaded, and began preaching at a nearby abbey. From Saint-Denis, Stephen traveled around France, spreading his messages as he went, promising to lead charges of Christ to Jerusalem. Although the Church was skeptical, many adults were impressed by his teaching. A few of those who initially joined him possessed his activeness; it is estimated that there were less than half the initial 30,000 remaining, a figure that was shrinking rapidly, rather than growing as perhaps anticipated.

At the end of June 1212, Stephen led his largely juvenile Crusaders from Vendôme to Marseilles. They survived by begging for food, while the vast majority seem to have been disheartened by the hardship of this journey and returned to their families.