Secrets of the Dead S06 E05 The Catalpa Rescue

The Catalpa rescue was the escape, on 17?19 April 1876, of six Irish Fenian prisoners from what was then the British penal colony of Western Australia.

From 1865 to 1867, British authorities rounded up supporters of the Irish Republican Brotherhood, an Irish independence movement, and transported sixty-two of them to the penal colony of Western Australia. They were convicted of crimes ranging from treason-felony to outright rebellion. Sixteen were soldiers who were court martialed for failing to report or stop the treason and mutinous acts of the others. Among them was John Boyle O'Reilly, later to become the editor of the Boston newspaper The Pilot. They were sent on the convict ship Hougoumont, arriving at Fremantle on 9 January 1868, at the Convict Establishment (now Fremantle Prison).

In 1869, O'Reilly escaped on the whaling ship Gazelle in Bunbury with assistance of the local Catholic priest, Father Patrick McCabe, and settled in Boston. Soon after his arrival, O'Reilly found work with The Pilot newspaper and eventually became editor. In 1871, another Fenian, John Devoy, was granted amnesty in England, among others, on condition that he settle outside Ireland, and he sailed to New York City. He also became a newspaperman, for the New York Herald. He joined the Clan na Gael, an organization that supported armed insurrection in Ireland.

In 1869, pardons had been issued to many of the imprisoned Fenians. Another round of pardons were issued in 1871, after which only a small group of "military" Fenians remained in Western Australia's penal system. In 1874, Devoy received a smuggled letter from imprisoned Fenian James Wilson, who was among those the British had not released. 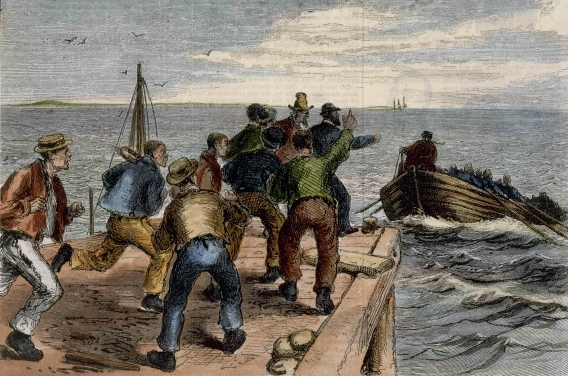 Dear Friend, remember this is a voice from the tomb. For is not this a living tomb? In the tomb it is only a man’s body that is good for worms, but in the living tomb the canker worm of care enters the very soul. Think that we have been nearly nine years in this living tomb since our first arrest and that it is impossible for mind or body to withstand the continual strain that is upon them. One or the other must give way. It is in this sad strait that I now, in the name of my comrades and myself, ask you to aid us in the manner pointed out… We ask you to aid us with your tongue and pen, with your brain and intellect, with your ability and influence, and God will bless your efforts, and we will repay you with all the gratitude of our natures… our faith in you is unbound. We think if you forsake us, then we are friendless indeed. 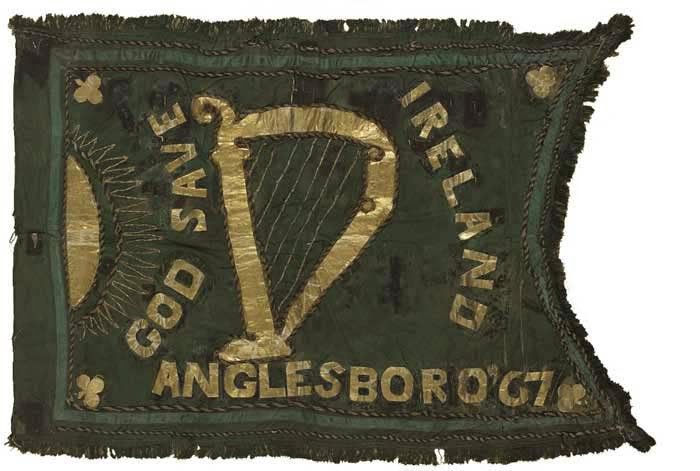 Although the primary symbol is a harp, the sunburst at the hoist is an example of combining symbols. This flag has a colourful history, it was used by the land league of the 1860s. It was hidden in a sack of flower during the 1919-21 conflict, to escape being discovered and potentially destroyed by the Royal Irish Constabulary Auxiliaries. It was recently sold at auction to a private owner 52,000 Euro.