The Winchester Model 1892 was an ideal companion rifle for men who spent a great deal of time on horseback.

The 1892 Alaskan Takedown from Taylor’s & Co. Firearms is manufactured by ArmiSport Chiappa (known for its superb reproductions of famous Winchester rifles and shotguns) and combines traditional design with modern technology, creating a faster handling and more durable 1892 lever-action rifle specifically designed for the sport hunting market. This takedown rifle chambered in .357 Magnum features the time-proven Winchester lever-action design with a 16-inch, Trapper-length barrel. The Alaskan is also available with a 20-inch, octagonal barrel as well as a .44 Remington Magnum chambering.

With hunting as its primary use, this gun is specifically tuned to provide maximum knock-down power using Hornady LeverEvolution 140-grain FTX ammunition or other high-velocity .357 Magnum rounds. For packing into the wilderness, the 1892’s takedown feature makes this an easy rifle to store and assemble when needed.

While the fundamental design is still from 1892, the sights are modern—a handcrafted, aperture-style Skinner Express rear sight paired with a tall, red fiber-optic front blade. This is a monumental improvement over the traditional semi-buckhorn rear and gold-bead front sights. The Skinner’s rear aperture is easy to acquire and the red fiber-optic front sight centers quickly, getting you on target posthaste. The Skinner sight is made of carbon steel and finished in a non-reflective black oxide. The windage- and elevation-adjustable rear sight is dovetailed into the base, which has a polished blue-black finish and the Skinner name. The standard rear sight comes with a 0.096-inch aperture (other apertures are available).

The Alaskan’s 16-inch barrel is pre-drilled and tapped for mounting optics, so there is little to do here except go solo with the Skinner sight or opt for a scope. For ease of carry and quick sighting, though, the Skinner is hard to beat.

The Alaskan’s finish is another striking contrast to traditional lever-action rifles. The 1892 has matte silver hard-chrome plating on the receiver, the barrel, the magazine tube and the finger lever to withstand the elements and resist rust, making this an all-season, all-weather sporting arm. The stock and forend are also weatherized in their composition, which is wood with a distinctive black, rubberized, overmolded, soft touch finish. This provides a firmer grip on the forend and a soft but gripping cheekweld. 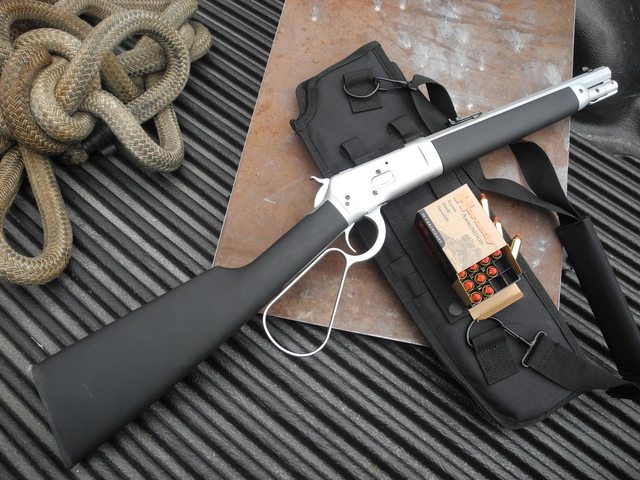