Military Operations in Urban Terrain (MOUT) - MOUT is defined as all military actions that are planned and conducted on terrain where man-made construction affects the tactical options available to the comrnander. 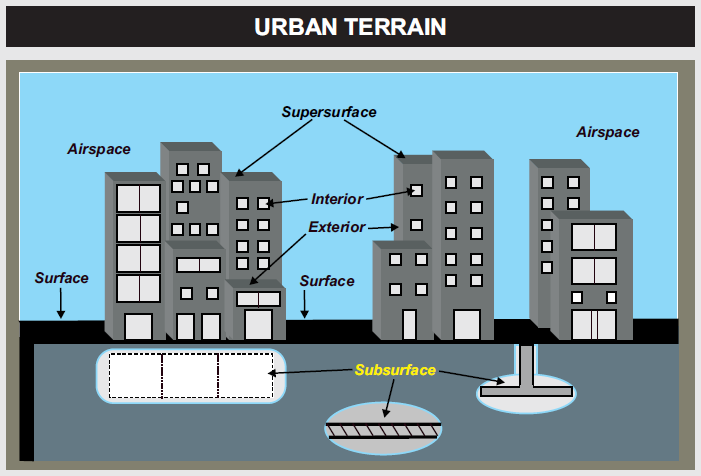 Urban warfare is combat conducted in urban areas such as towns and cities. Urban combat differs from combat in the open at both the operational and the tactical levels. Complicating factors in urban warfare include the presence of civilians and the complexity of the urban terrain. Urban combat operations may be conducted to capitalize on strategic or tactical advantages associated with the possession or the control of a particular urban area or to deny these advantages to the enemy.

Fighting in urban areas negates the advantages that one side may have over the other in armor, heavy artillery, or air support. Ambushes laid down by small groups of soldiers with handheld anti-tank weapons can destroy entire columns of modern armor (as in the First Battle of Grozny), while artillery and air support can be severely reduced if the "superior" party wants to limit civilian casualties as much as possible, but the defending party does not (or even uses civilians as human shields).

Some civilians may be difficult to distinguish from such combatants as armed militias and gangs, and particularly individuals who are simply trying to protect their homes from attackers. Tactics are complicated by a three-dimensional environment, limited fields of view and fire because of buildings, enhanced concealment and cover for defenders, below-ground infrastructure, and the ease of placement of booby traps and snipers.

SHTF study program. The best fight is the one you don't get into, but if you do, learn the ropes even for escape and evasion.