The Conspirators' Hierarchy: The Committee of 300 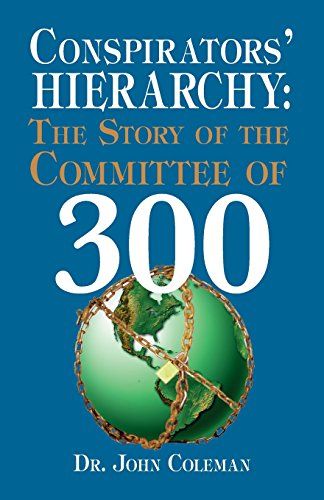 Undoubtedly the “Bible” of conspiracy books, the completely revised and updated Fourth Edition landmark book is filled with information not previously disclosed. It names one of the contenders for the White House who is closely related to one of the oldest “300” families whose fortune was derived from opium trade with China, and no, it is not any of the Bush clan.

The origin of the Committee of 300 is described, how it has evolved from an opium trading company with a Royal Charter to become the de-facto secret upper-level parallel government of the United States and the world, with only Russia and China standing in opposition to it. A highly organized secret society with tentacles reaching into every level of government in the United States and indeed, the world, backed by massive financing and run by men of the highest education and intelligence, with vast resources at their disposal, manages the thousands of major political and economical and contrived situations.

In the FOURTH EDITION there is listed some very prominent men who came forward to support the existence of the “300.” One of them predicted twenty years ago that “The United States will be turned into a welfare state” and that “with the exception of Russia all nations would unite in a world alliance (The One World Government).”

Perhaps the most startling admission of the existence of the super-secret organization came from President Wilson in the last days of his presidency: “Some of the biggest men in the United States, in the field of commerce and manufacturing, are afraid of somebody, are afraid of something. They know that there is a power somewhere, so organized, so subtle, so watchful, so interlocked, so pervasive, that they had better not speak above their breath when they speak in condemnation of it.” The “power” Wilson was talking about is the Committee of 300 and Wilson knew he did not dare to mention it by name.