The fourth installment of Bible Secrets Revealed discusses the person and ministry of Jesus. 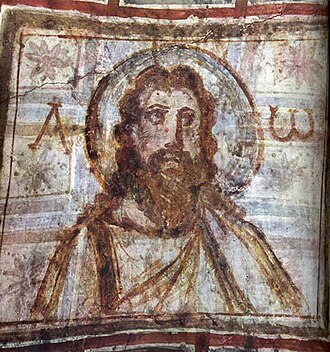 Jesus is depicted with the Alpha and Omega letters in the catacombs of Rome from the 4th century.

Act 1 opens with the issue of the year of Jesus’ birth. Many people do not realize that Jesus was not born in “Year 1” according to our modern calendar (despite the church’s best efforts to align the calendar with Jesus’ birth”;), but some time between 7 and 4 B.C.E. If Jesus was born during the time of Herod the Great, as is stated in the Gospel of Matthew, he would have had to have been born prior to 4 B.C.E., the year Herod died. When we add to this the fact that it took time to travel in the ancient world, and that the visit from the Magi to Herod and then to Jesus therefore wasn’t immediate, as well as the fact that those who calibrated the calendar didn’t account for “Year Zero” (that is, the calendar goes from 1 B.C. to 1A.D. without taking into account the first year of Jesus’ life), then we end up with a date likely between 7 and 5 B.C.E. I’ve written on this subject previously at Bible and Interpretation.

The show then addresses problems with the account of Jesus’ birth in Bethlehem. Why would “Jesus of Nazareth” be said to have been born in Bethlehem instead of Nazareth, the hometown of his parents? It was likely to fulfill a prophecy that the Messiah would be born in the “City of David,” which is Bethlehem. So Luke tells the story of Joseph traveling to Bethlehem for a census to be counted in the place of Joseph’s birth—something that has absolutely zero precedent and/or evidence in antiquity.

An additional problem with the date of the birth of Jesus arises when the Gospel of Luke states that Jesus was born during the time of Quirinius, who was not appointed Legate of Syria until 6 C.E., meaning that either Matthew’s or Luke’s dating (or both) of the birth of Jesus is incorrect. Herod the Great and Quirinius never ruled at the same time and were, in fact, about ten years apart.

The episode then asks about Jesus’ so-called “lost years”—the period of Jesus’ childhood about which the Bible is silent. The gospels focus mainly on Jesus’ adult ministry. Only the later addition of the birth narratives, which our earliest gospel—Mark—did not bother to include, caused a perceived “gap” in the story of Jesus’ life when in reality no gap existed. The story of Jesus simply began with his adult ministry.

We also learn that Jesus had siblings. Jesus had four brothers named in the Bible (James, Joses, Judas and Simon), along with some sisters (Mark 6:3). This would not be a problem, except for the rise of the tradition of Mary’s perpetual virginity, which argues that she not only immaculately conceived and gave birth to Jesus, but that she remained a virgin throughout the remainder of her lifetime. This conflicts with the Bible, which says specifically that Jesus had brothers and sisters. Interestingly, Catholics traditionally solve this problem by arguing that the supposed “brothers” mentioned in Mark 6 are actually “cousins,” while the Greek Orthodox tradition solves this problem by arguing that Joseph was married prior to being married to Mary. According to the tradition, it was with his deceased wife that Joseph had “James and Joses and Judas and Simon,” meaning that the brothers mentioned in the Bible are half-brothers of Jesus by a previous marriage, allowing Mary to be a perpetual virgin.