At its core, History's new series Bible Secrets Revealed could easily be titled 'How Scholars Read the Bible.' This is because the secrets revealed in the series are not secrets to most Bible scholars, professional archaeologists working in Israel and the West Bank, or to those students enrolled in credible graduate seminary programs. The show examines issues pertaining to the Bible that might not be as well known to those who have not attended a seminary or majored in religious studies at a university.

This episode examines the Land of Canaan, Israel and Palestine as a Biblical “Promised Land.”

Act 1 begins by pointing out that Jerusalem is sacred not only to Jews, but to Christians and Muslims alike. It then asks whether the modern conflict in Israel was predicted in the Hebrew Bible (aka the Christian Old Testament). The episode recounts the story of Abraham and his “call” to what would be the Promised Land of Canaan.

The opening act also examines the ethically problematic story of the Akedah—the binding and near-human sacrifice of Isaac by Abraham, as commanded by God. The show depicts how the same Mount Moriah upon which Isaac was to be sacrificed came to be associated with Jerusalem in later tradition, so that the Temple Mount came to be identified with Mount Moriah from the past, as well as with the coming of the Messiah in the future.

The episode also examines the conquest of Canaan and the idea that what would become Israel and Judah must first be purged of all living beings by divine command in order to purify the land. Again, this traditionally touchy ethical subject is problematic because it sees the Promised Land as a place that must first experience a divinely ordained genocide (whether or not we should refer to it as a genocide is another debate altogether), and this has perplexed ethicists for millennia.

“The Promised Land” Act 2: Moses and the Exodus

Act 2 begins by asking the question of whether the 40 years wandering in the desert was a death sentence imposed upon Israel for their lack of faith in God. Likewise, the episode offers suggestions as to why Moses never got to enter the Promised Land.

The show then transitions to the story of the Exodus and of Moses and examines the archaeological record to ask whether the Biblical Exodus should be considered an historical event, or a simply a beautiful literary tale. While scholars point out that there is absolutely no archaeological evidence for a Biblical Exodus (early or late), other scholars suggest that we shouldn’t expect to find archaeological evidence of an Exodus, as the escaping Hebrews would have lived as nomads, whose lifestyle wasted very little and who would have traveled through the desert rather efficiently, leaving behind little evidence of their migration. The Exodus is ultimately held up as the defining moment of the ancient Israelites, where God intervened on behalf of his people and delivered them—a theme we find throughout the Bible. Act 2 ends by addressing the issue of cognitive dissonance. I ask, “What do we do when our experience and reality tell us one thing, and our faith tells us another?” It is this issue that has been at the interchange of critical study of the Bible and personal confessions of faith for centuries. Many are hesitant to study the Bible, archaeology, ancient languages, etc., critically because they’re afraid they might discover that what they believe at this present moment, or that what they’ve always been taught, won’t stand up to the evidence. This is an issue that all people of faith face when they enter a Biblical studies program or seminary study. I’ve always felt that if God is what he is claimed to be by the Bible, and if one’s religion is what one believes it to be, then both can handle a few simple questions. And it is at this point—when one looks objectively at the literary, archaeological and historical evidence—that some people decide to rethink how they view God, while others decide to deny facts and reality and cling to what they believe, regardless of the evidence. Any honest student of the Bible has dealt (or will soon deal) with this dilemma of cognitive dissonance; it is how one responds to this intersection of faith and evidence that most point to as a moment of life-changing growth and that often determines the trajectory of one’s worldview for years to come.

I’ll also take this opportunity to point out that all of the B-roll footage used in the “Promised Land” episode (the background footage of archaeologists digging in Israel) was filmed at our excavation at Tel Azekah. For more, visit azekah.org. 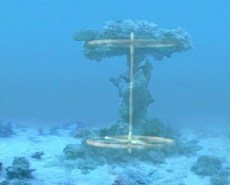 Keepers of the Lost Ark?