Our February 24, 2011 show was a model on REGIME CHANGE as a foreign policy. As the noose closes in on Russia, will non-violent revolution lead to nuclear war? Restored from the That Channel archives this is a showpiece episode.

What's it all about the turmoil in the Middle East? Follow the money trail to the rising influence of Islamic Banking where money IS NOT created out of thin air and usury is still a sin. In Tunisia Ben Ali's son-in-law El Materi opens the first home grown Islamic bank. The Tunis Financial Harbour to vie for $1.5 trillion in investments. The Central Bank cartel of the Rothschilds is under threat. Regime change is required. Seven of the top ten Islamic Banks are in Iran. Rothschild's puppets say bomb, bomb, bomb Iran. Soros funded organizations behind the colour revolutions past and present. American professor wrote the book on non-violent regime change. Protests leaders trained and equipped by the banksters. Rumour Gadaffi shot, gravy train filmed leaving Tripoli, was there a double Gadaffi left behind, pipeline routes fought over, Middle East leaders stroked, CIA man in Pakistan part of elite team delivering WMD to Al Qaida, End of the fiscal road in Washington, massive asian arms race, 7/7 inquest counsel a shill, Gulf still a threat, they're watching your privates at missing your weapons with the scanner at the airport, TV patent controls your mind, will you be the Borg? On Conspiracy Cafe it's BANK WARS in the Middle East. 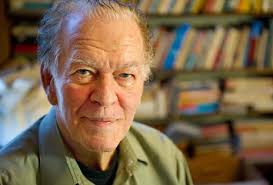 This is Dr Gene Sharp the man now credited with the strategy behind the toppling of the Egyptian government.

Gene Sharp is the world's foremost expert on non-violent revolution. His work has been translated into more than 30 languages, his books slipped across borders and hidden from secret policemen all over the world.

As Slobodan Milosevic in Serbia and Viktor Yanukovych in Ukraine fell to the colour revolutions which swept across Eastern Europe, each of the democratic movements paid tribute to Sharp's contribution, yet he remained largely unknown to the public.

Despite these successes and a Nobel Peace Prize nomination in 2009 he has faced almost constant financial hardship and wild accusations of being a CIA front organisation. The Albert Einstein Institution based on the ground floor of his home is kept running by sheer force of personality and his fiercely loyal Executive Director, Jamila Raqib. 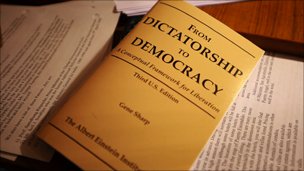 Key Steps on the Path to Revolution

Serbia’s Srdja Popovic is known by many as a leading architect of regime changes in Eastern Europe and elsewhere since the late-1990s, and as one of the co-founders of Otpor!, the U.S.-funded Serbian activist group which overthrew Slobodan Milošević in 2000. Lesser known, an exclusive Occupy.com investigation reveals that Popovic and the Otpor! offshoot CANVAS (Centre for Applied Nonviolent Action and Strategies) have also maintained close ties with a Goldman Sachs executive and the private intelligence firmStratfor (Strategic Forecasting, Inc.), as well as the U.S. government. Popovic’s wife also worked at Stratfor for a year. These revelations come in the aftermath of thousands of new emails released by Wikileaks’ “Global Intelligence Files.” The emails reveal Popovic worked closely with Stratfor, an Austin, Texas-based private firm that gathers intelligence on geopolitical events and activists forclients ranging from the American Petroleum Institute and Archer Daniels Midland to Dow Chemical, Duke Energy, Northrop Grumman, Intel and Coca-Cola.