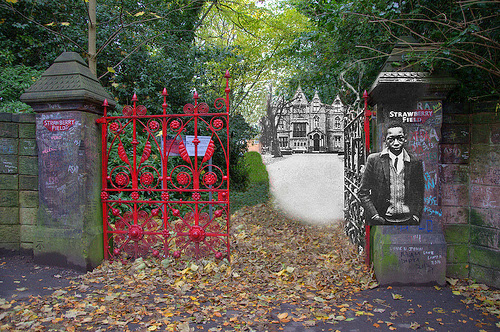 "Strawberry Fields Forever" is a song by the English rock band the Beatles, written by John Lennon and credited to Lennon–McCartney. It was released on 13 February 1967 as a double A-side single with "Penny Lane". It represented a departure from the group's previous singles and a novel listening experience for the contemporary pop audience. While the song initially divided and confused music critics and the group's fans, it proved highly influential on the emerging psychedelic genre. Its accompanying promotional film is similarly recognised as a pioneering work in the medium of music video.

Lennon based the song on his childhood memories of playing in the garden of Strawberry Field, a Salvation Army children's home in Liverpool. Starting in November 1966, the band spent 45 hours in the studio, spread over five weeks, creating three versions of the track. The final recording combined two of those versions, which were entirely different in tempo, mood and musical key. It features reverse-recorded instrumentation, Mellotron flute sounds, an Indian swarmandal, tape loops and a fade-out/fade-in coda, as well as a cello and brass arrangement by producer George Martin. For the promotional film, the band used experimental techniques such as reverse effects, jump-cuts and superimposition.

The song was the first track the Beatles recorded after completing Revolver and was intended for inclusion on their forthcoming Sgt. Pepper's Lonely Hearts Club Band. Instead, with pressure from their record company and management for new product, the group were forced to issue the single, and then adhered to their philosophy of omitting previously released singles from their albums. The double A-side peaked at number 2 on the Record Retailer chart, thereby breaking the band's four-year run of chart-topping singles in the UK. In the United States, "Strawberry Fields Forever" peaked at number 8 on the Billboard Hot 100. To the band's displeasure, the song was later included on the US Magical Mystery Tour LP.

Lennon viewed "Strawberry Fields Forever" as his finest work with the Beatles. After his murder, a section of New York's Central Park was named after the song. In 1996, the discarded first version of the song was issued on the outtakes compilation Anthology 2; in 2006, a new version was created for the remix album Love. Artists who have covered the song include Richie Havens, Todd Rundgren, Peter Gabriel, Ben Harper, and Los Fabulosos Cadillacs featuring Debbie Harry. In 1990, a version by the Madchester group Candy Flip became a top-ten hit in the UK and Ireland.