Department S: EP 5 One of Our Aircraft Is Empty

Department S is a United Kingdom spy-fi adventure series produced by ITC Entertainment. It consists of 28 episodes which originally aired in 1969 and 1970. It starred Peter Wyngarde as author Jason King (later featured in spin-off series Jason King), Joel Fabiani as Stewart Sullivan, and Rosemary Nicols as computer expert Annabelle Hurst. These three were agents for a fictional special department (the "S" of the title) of Interpol. The head of Department S was Sir Curtis Seretse (Dennis Alaba Peters).

"When a case proves too baffling for the minds of Interpol, they turn to the talents of Department S." – from the ITC trailer for the series.

The series was created by Dennis Spooner and Monty Berman, although neither man wrote any of the episodes. Episodes were instead written by ITC regulars such as Terry Nation and Philip Broadley. Many of the directors on the show had also worked on other ITC shows such as The Saint, Danger Man and Randall and Hopkirk (Deceased). 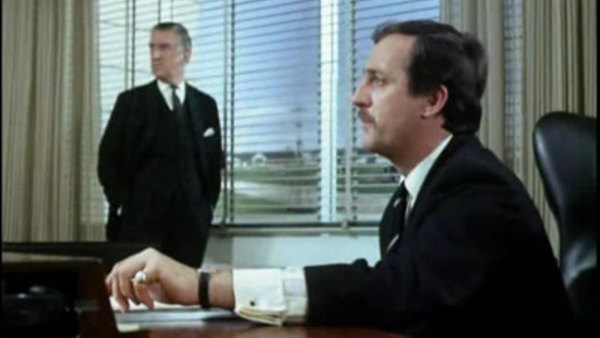 The series was filmed on 35mm and designed, like all ITC's film productions, to fit the United States commercial format. Unusually, however, the episode title, writer and director credits appear on screen before the opening title sequence, though after the theme tune has started. With a few exceptions, the principal cast is always studio-bound. Some exteriors are represented by studio buildings, while the rest are mainly shown in second-unit footage using doubles where necessary. Exotic locations are usually established by the use of stock footage. To further cut costs, the series was produced back-to-back with Randall and Hopkirk (Deceased).

The team itself is led by American and former FBI agent Stewart Sullivan (Fabiani), who takes direction from Seretse. Outside of his FBI experience, little is known about Sullivan except that he was pragmatic and hands-on, and did much of the leg-work, confronting the criminals.

Jason King (Wyngarde) is the ideas man, but also helps in the field. He is an adventure novelist who uses details from their cases to write his novels. The living he makes writing novels affords him a hedonistic lifestyle, as he is often seen with beautiful women though he had no permanent love interest in the series; in one episode he mentioned he was a widower whose wife was killed in a plane crash. King also serves as comic relief in the series, especially in scenes of hand-to-hand combat where he winds up being subdued as often as he prevails.

Annabelle Hurst (Nicols) is a computer expert and analyst as well as a field investigator. A very attractive woman, Hurst sometimes appears in seductive, glamorous disguises. There were ongoing hints of romantic interest between Sullivan and Hurst during the series.

An airliner lands at Heathrow but the crew and passengers are missing. (Made back-to-back with "Six Days").

An aeroplane carrying a hundred and thirty passengers on a flight from New York asks for landing clearance in London but,having safely landed,it is discovered that there is nobody at all on the plane and the pilot is later found murdered in a warehouse. The mystery deepens when Annabelle finds a photograph of a reclusive industrialist apparently boarding the plane,although his name was not on the passenger list. Is it all part of an elaborate scheme to abduct him?