STAR TREK S1EP28 City on the Edge of Forever 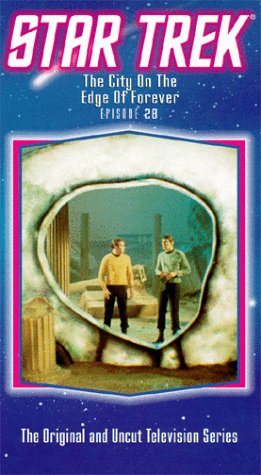 Click on the little head for English. It's the second option.

"The City on the Edge of Forever" is the second to last episode of the first season of the American science fiction television series Star Trek. It is episode #28, production #28, first broadcast on April 6, 1967. It was repeated on August 31, 1967 and marked the last time that NBC telecast an episode of the series on Thursday nights. It was one of the most critically acclaimed episodes of the series and was awarded the 1968 Hugo Award for Best Dramatic Presentation. The only other episode with such an honor is the two-part episode "The Menagerie". The teleplay is credited to Harlan Ellison, but was also largely rewritten by several authors before filming. The filming was directed by Joseph Pevney. Joan Collins guest starred as Edith Keeler.

This episode involves the crew of the starship USS Enterprise discovering a portal through space and time, which leads to Dr. McCoy accidentally altering history. 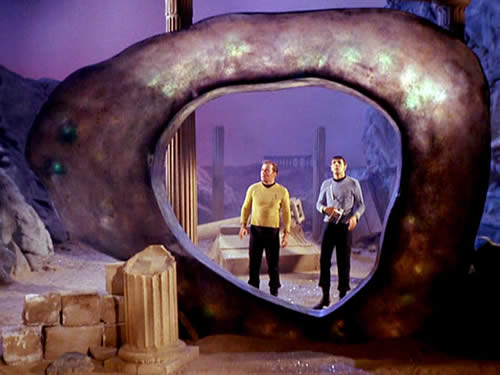 Stardate: Unknown. While the Federation starship USS Enterprise is investigating temporal disturbances from a nearby planet, Lt. Sulu is injured in an explosion. Chief Medical Officer Dr. McCoy gives him a shot of cordrazine and accidentally injects himself with an overdose when the ship is shaken. Delusional, he flees from the Bridge and to the Transporter Room, beaming himself down to the planet.

Captain Kirk beams down with a landing party to look for McCoy and finds the source of the time distortions, an ancient glowing ring with an aperture the height of a human. The "Guardian of Forever" explains that he is a doorway to any time and place. While Spock is recording historic portal images, McCoy escapes through it, into the past. Suddenly the landing party loses contact with Enterprise and is informed that the past has been altered and the ship - along with the entire Federation - no longer exists. 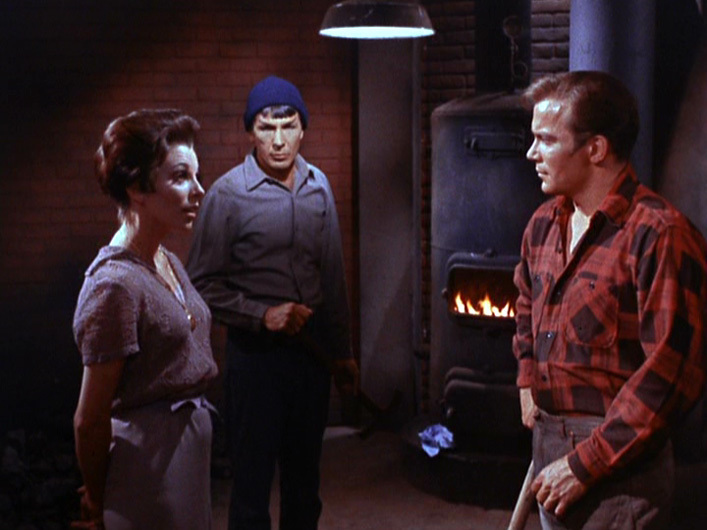 Since the timeline must be repaired, the Guardian lets Kirk and Spock go after McCoy at the same image in time that McCoy went in. Before the pair depart, Kirk tells the landing party to enter the portal and make new lives for themselves in the past if he and Spock fail to return. Kirk and Spock arrive in New York City during the 1930s Great Depression. After stealing some clothes to blend in, they meet a woman named Edith Keeler (Joan Collins), who runs the 21st Street Mission. They offer to work for her. Spock begins to construct a processor to interface with his tricorder to find out how McCoy altered history.

Kirk begins to fall in love with Edith, whom he finds remarkable. She is interested in man's future and the stars. McCoy stumbles into the mission where Edith takes him in, unbeknownst to Kirk. Spock finishes his work and, reviewing the Guardian's images of the original and altered timelines, discovers that Edith was supposed to have died in a traffic accident, which was prevented by McCoy. Instead, Edith lived on to start a pacifist movement which influenced the United States sufficiently to delay its entrance into World War II, thus allowing Nazi Germany time to develop an atomic bomb and win the war. Kirk knows that Edith must die in order for time to return to normal.

Meanwhile, Edith nurses McCoy back to health, and he tells her his story. Though Edith is skeptical, she tells McCoy that he would like her eccentric new boyfriend.

Later, as Kirk and Edith are walking to the movies, Edith mentions Dr. McCoy. Alarmed, Kirk tells Edith to stay there before running to find Spock. The three friends meet in front of the mission. As a curious Edith crosses the street to join them, she steps in front of a fast-moving truck. Instinctively, Kirk reacts, but freezes when Spock stops him. McCoy is restrained by Kirk as Edith is knocked down and killed. McCoy tells Kirk that he could have saved her. “Do you know what you just did?" he says. Spock responds quietly, "He knows, Doctor. He knows."

With Edith's death, history reverts to its original form. Kirk, Spock and McCoy return to the Guardian's planet where, as far as the rest of the landing party are concerned, the three have only been away for a few minutes. The Guardian then says, "Time has resumed its shape. All is as it was before. Many such journeys are possible. Let me be your gateway." Enterprise contacts the landing party and the traumatized Kirk responds with the instructions, "Let's get the hell out of here." 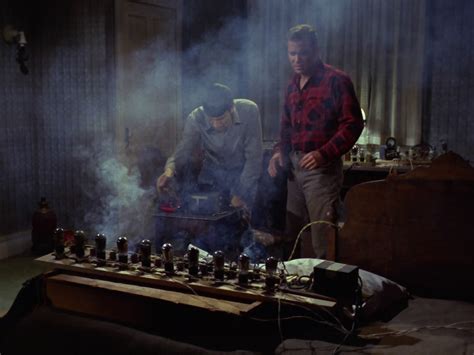