2006 documentary by WGBH on the life and travels of Christopher Columbus. 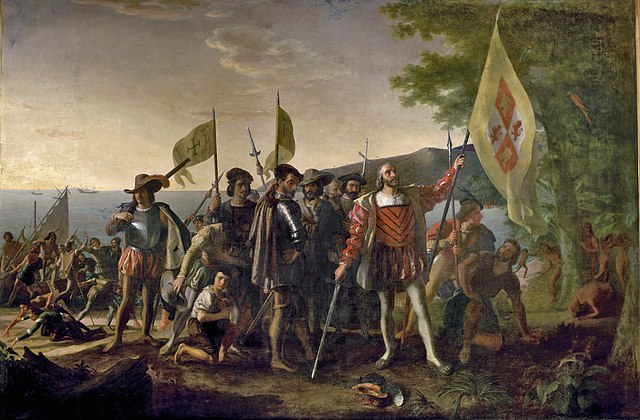 Christopher Columbus[a] (/kəˈlʌmbəs/;[3] Latin: Christophorus Columbus; Ligurian: Cristoffa Corombo; Italian: Cristoforo Colombo; Spanish: Cristóbal Colón; between 25 August and 31 October 1451 – 20 May 1506) was an explorer and navigator who completed four voyages across the Atlantic Ocean, opening the way for European exploration and colonization of the Americas. His expeditions, sponsored by the Catholic Monarchs of Spain, were the first European contact with the Caribbean, Central America, and South America.

Scholars generally agree that Columbus was born in the Republic of Genoa and spoke a dialect of Ligurian as his first language. He went to sea at a young age and travelled widely, as far north as the British Isles and as far south as what is now Ghana. He married Portuguese noblewoman Filipa Moniz Perestrelo and was based in Lisbon for several years, but later took a Castilian mistress; he had one son with each woman. Though largely self-educated, Columbus was widely read in geography, astronomy, and history. He formulated a plan to seek a western sea passage to the East Indies, hoping to profit from the lucrative spice trade. Following Columbus's persistent lobbying to multiple kingdoms, Catholic monarchs Queen Isabella I and King Ferdinand II agreed to sponsor a journey west. Columbus left Castile in August 1492 with three ships, and made landfall in the Americas on 12 October (ending the period of human habitation in the Americas now referred to as the pre-Columbian era). His landing place was an island in the Bahamas, known by its native inhabitants as Guanahani. Columbus subsequently visited the islands now known as Cuba and Hispaniola, establishing a colony in what is now Haiti: the first European settlement in the Americas since the Norse colonies nearly 500 years earlier. He arrived back in Castile in early 1493, bringing a number of captive natives with him. Word of his voyages soon spread throughout Europe.

Columbus made three further voyages to the New World, exploring the Lesser Antilles in 1493, Trinidad and the northern coast of South America in 1498, and the eastern coast of Central America in 1502. Many of the names he gave to geographical features—particularly islands—are still in use. He continued to seek a passage to the East Indies, and the extent to which he was aware that the Americas were a wholly separate landmass is uncertain. He never clearly renounced his belief that he had reached the Far East and gave the name indios ("Indians") to the indigenous peoples he encountered. As a colonial governor, Columbus was accused by his contemporaries of significant brutality and was soon removed from the post. Columbus's strained relationship with the Crown of Castile and its appointed colonial administrators in America led to his arrest and removal from Hispaniola in 1500, and later to protracted litigation over the benefits that he and his heirs claimed were owed to them by the crown. Columbus's expeditions inaugurated a period of exploration, conquest, and colonization that lasted for centuries, helping create the modern Western world. The transfers between the Old World and New World that followed his first voyage are known as the Columbian exchange.

Columbus was widely venerated in the centuries after his death, but public perception has fractured in recent decades as scholars give greater attention to the harm committed under his governance, particularly the near-extermination of Hispaniola's indigenous Taíno population from mistreatment and European diseases, as well as their enslavement. Proponents of the Black Legend theory of history claim that Columbus has been unfairly maligned as part of a wider anti-Catholic sentiment. Many landmarks and institutions in the Western Hemisphere bear his name, including the country of Colombia and the District of Columbia.

Replicas of Niña, Pinta and Santa María sailed from Spain to the Chicago Columbian Exposition in 1893