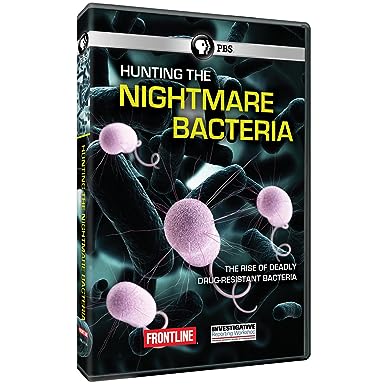 This documentary is as exciting and scary as any suspense movie, not only providing explanations for how and why some bacteria has become immune to most- if not all- drugs available but showing actual patients and describing specific cases where people died or were permanently affected by bacterial infections - even as doctors struggled to find an effective drug to save them.

Although I knew that deaths due to infections of antibiotic resistant bacteria were on the rise, I didn't know that they are already a significant threat. The reality? Bacteria have formed defenses against antibiotics far sooner than many experts predicted (and those who did raise the alarm were ignored far too often).

This film convinced me that life- threatening bacterial infections are no longer uncommon events. And it could be just a matter of time before a pandemic is likely. When will a bacteria appear which is not only impervious to all antibiotics but easily spread through the world's population?

Grim as this seems, there are still options. Even if we can't prevent the rise of super strong bacteria, we still have choices we can make daily to help reduce risk. The film describes some of those options.

It is clear that much could have been done to slow the evolution of these "super" bacteria : not prescribe and take antibiotics at the first sign of illness, use a wait and see approach until a minor infection worsens, etc. Every dose of an antibiotic gives bacteria another chance to become resistant.

YOU DON'T HAVE TO SUFFER AND DIE. Essential Oils Might Be the New Antibiotics

Three essential oils kill MRSA. That has been know for years. Drug companies won't market them because there's no patent. That is as close to murder as it comes. You know the cure and remain silent about it. Be your own advocate. I use them all the time. In hospital I healed many critical patients with them. The doctors just starred at me when I left. One was a small child dying from upper respiratory infection. Her sibling already perished. I found the mother crying. We anointed the child with Myrrh oil at the neck. Within minutes she rose up. She jumped to the couch next to her mother and was rather boisterous. The next day she ran through the ward pulling her IV cart. Just like that. Were the three wise men wise giving gold, frankincense and Myrrh to baby Jesus? I believe they were. And you wait for Santa Claus. Hyssop oil was what I used on the adult men in my ward. One was writing his will. He was very old. He responded overnight. The funeral home lost two customers that week. Aromatherapy oils could kill deadly superbug