The first known ancestors of multi-shot weapons were early revolvers made in Europe in the late 1500s. One is a shoulder-gun-length weapon made in Nuremberg, Germany, circa 1580. Another is a revolving arquebus, produced by Hans Stopler of Nuremberg in 1597.

Another large, early repeating was created by James Puckle, a London lawyer, who patented what he called "The Puckle Gun" on May 15, 1718. It was a design for a 1 in. (25.4 mm) caliber, flintlock revolver cannon able to fire 9 rounds before reloading, intended for use on ships. According to Puckle, it was able to fire round bullets at Christians and square bullets at Turks. While ahead of its time, foreshadowing the designs of revolvers, it was not adopted or produced.

In 1777, Philadelphia gunsmith Joseph Belton offered the Continental Congress a "new improved gun", which was capable of firing up to twenty shots in five seconds, automatically, and was capable of being loaded by a cartridge. Congress requested that Belton modify 100 flintlock muskets to fire eight shots in this manner, but rescinded the order when Belton's price proved too high.[7][8]

In the early and mid-19th century, a number of rapid-firing weapons appeared which offered multi-shot fire, and a number of semi-automatic weapons as well as volley guns. Volley guns (such as the Mitrailleuse) and double barreled pistols relied on duplicating all parts of the gun. Pepperbox pistols did away with needing multiple hammers but used multiple barrels. Revolvers further reduced this to only needing a pre-prepared magazine using the same barrel and ignitions. However, like the Puckle gun, they were still only semiautomatic. 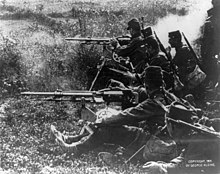 The Agar Gun, otherwise known as a "coffee-mill gun" because of its resemblance to a coffee mill, was invented by Wilson Agar at the beginning of the US Civil War. The weapon featured automatic loading through ammunition being loaded in a hopper above the weapon. The weapon featured a single barrel and fired through the turning of a hand crank. The weapon was demonstrated to President Lincoln in 1861. He was so impressed with the weapon that he purchased 10 on the spot for $1,500 apiece. The Union Army eventually purchased a total of 54 of the weapons. However, due to antiquated views of the Ordnance Department the weapons, like its more famous counterpart the Gatling Gun, saw only limited use.

The Gatling gun, patented in 1861 by Richard Jordan Gatling, was the first to offer controlled, sequential fire with automatic loading. The design's key features were machine loading of prepared cartridges and a hand-operated crank for sequential high-speed firing. It first saw very limited action in the American Civil War; it was subsequently improved and used in the Franco-Prussian war and North-West Rebellion. Many were sold to other armies in the late 19th century and continued to be used into the early 20th century, until they were gradually supplanted by Maxim guns. Early multi-barrel guns were approximately the size and weight of contemporary artillery pieces, and were often perceived as a replacement for cannon firing grapeshot or canister shot. The large wheels required to move these guns around required a high firing position which increased the vulnerability of their crews. Sustained firing of gunpowder cartridges generated a cloud of smoke making concealment impossible until smokeless powder became available in the late 19th century. Gatling guns were targeted by artillery they could not reach and their crews were targeted by snipers they could not see. The Gatling gun was used most successfully to expand European colonial empires by killing warriors of non-industrialized societies.

British Vickers machine gun in action near Ovillers during the Battle of the Somme in 1916. The crew are wearing gas masks.

Gatlings were the first widely used rapid-fire guns and, due to their multiple barrels, could offer more sustained fire than the first generation of air-cooled, recoil-operated machine guns. The weight, complexity, and resulting cost of the multibarrel design meant recoil-operated weapons, which could be made lighter and cheaper, would supplant them. Recoil-operated machine guns were light enough to be moved by one man, were easier to move through rough terrain, and could be fired from a lower, protected position. It would be another 50 years before the concept was again used to allow extremely high rates of fire, such as in miniguns, and automatic aircraft cannon.

The first self-powered machine gun was invented in 1884 by Sir Hiram Maxim. The "Maxim gun" used the recoil power of the previously fired bullet to reload rather than being hand-powered, enabling a much higher rate of fire than was possible using earlier designs such as the Nordenfelt and Gatling weapons. Maxim also introduced the use of water cooling, via a water jacket around the barrel, to reduce overheating. Maxim's gun was widely adopted and derivative designs were used on all sides during the First World War. The design required fewer crew and was lighter and more usable than the Nordenfelt and Gatling guns. First World War combat experience greatly increased the importance of the machine gun. The United States Army issued four machine guns per regiment in 1912, but that allowance increased to 336 machine guns per regiment by 1919.[11]