Wreck of the Sunset Limited

The 1993 Big Bayou Canot train wreck was the derailing of an Amtrak train on the CSXT Big Bayou Canot bridge in northeast Mobile, Alabama, USA, killing 47 and injuring 103, on September 22, 1993. It is the deadliest train wreck in Amtrak's history and the deadliest rail disaster in the United States since the Newark Bay, New Jersey rail accident in 1958. In terms of fatalities and destruction, this wreck substantially exceeded the severity of the Chase, Maryland accident that occurred in 1987. It was caused by a barge hitting the bridge. Noted Calvinist author and theologian R. C. Sproul was one of the passengers on the train during the time of the incident and often gives firsthand accounts of the story. 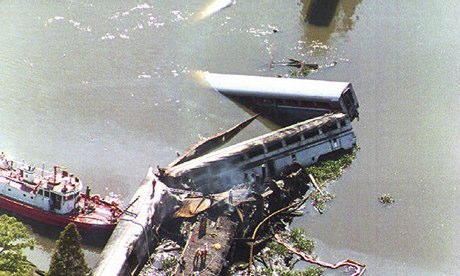 This wreck occurred after a CSX Transportation unfinished swing bridge over the Big Bayou Canot in southwestern Alabama (about 10 miles northeast of Mobile) was struck at approximately 2:45 AM by a barge being pushed by the towboat Mauvilla (owned and operated by Warrior and Gulf Navigation of Chickasaw, Alabama), whose pilot had become disoriented in heavy fog. The collision forced the bridge approximately three feet out of alignment and severely kinked the track.

At approximately 2:53 AM, Amtrak's Sunset Limited train, powered by three locomotives (one GE Genesis P40DC number 819 in the front, and two EMD F40PHs, numbers 262 and 312) en route from Los Angeles, California to Miami, Florida with 220 passengers and crew aboard, crossed the bridge at a high speed and derailed at the kink. The locomotives slammed into the bridge's superstructure, causing its destruction. The lead locomotive embedded itself nose-first into the canal bank and exploded, and the other locomotives, as well as the baggage car, dormitory car and two of the six passenger cars, plunged into the water. The locomotives' fuel tanks, each of which held several thousand gallons of diesel fuel, ruptured upon impact, resulting in a massive fuel spill and a fire. Forty-seven people, 42 of whom were passengers, were killed, many by drowning, others by fire/smoke inhalation. Another 103 were injured. The towboat's four crewmembers were not injured.

Immediately prior to the accident, the Mauvilla had made a wrong turn and entered an un-navigable channel of water. The towboat's pilot was not properly trained on how to read his radar and thus, owing to the very poor visibility in the fog and his lack of experience, did not realize that he was off-course. Although he was aware that he had struck something when his tow collided with the bridge, his initial supposition was that one of the barges had merely run aground.

The bridge span had actually been designed to rotate so it could be converted to a swing bridge by adding suitable equipment. No such conversion had ever been performed, but the span had not been adequately secured against unintended movement. Despite the displacement of the bridge, the continuously welded rails did not break. As a result, the track circuit controlling the bridge approach block signals remained closed (intact) and the nearest signal continued to display a clear (green) aspect. Had one of the rails been severed by the bridge's displacement, the track circuit would have opened, causing the approach signal to display a stop (red) aspect and the preceding signal an amber approach indication. This might have given the Amtrak engineer sufficient time to stop his train or at least reduce speed in an effort to minimize the severity of the accident.

An episode of the National Geographic Channel documentary series Seconds From Disaster examined this accident in detail.

•Although there were signals on the line operated by track circuits, the long welded rails did bend, instead of breaking and did not cause the bridge approach signal to change to red. Had jointed rails still been fitted, the signal may have dropped to red, as such rails would more likely have broken at the joints.

•The train had to stop over in New Orleans, Louisiana, in order that a broken down air conditioner could be repaired. This put the train a half hour behind schedule. If not for the delay, the Sunset Limited would have passed over the Big Bayou Canot bridge a full 20 minutes before it was struck by the barge.

•The span had actually been designed to rotate so that the bridge could be converted to a swing bridge by installing a motor and control equipment, if it were ever decided that barge traffic warranted this. No such conversion had ever been done and the span's lack of lateral rigidity was a contributing factor to the accident.

•Had barge traffic posed a regular hazard, special barge collision detection circuits could have been fitted to shunt the signals to red in case of a collision. Similar circuits are used to detect washaways. But the Big Bayou Canot is not navigable, so this seemed nearly pointless.

•As a result of the accident, towboat pilots are now required to be trained in the use of radar.

One passenger of note, currently holds the only known ticket for the train which derailed, that was not used. Nicholas Moran, Military Specialist for World of Tanks was slated to be on the train at the time of the accident. However, reviewing his own bookings, he decided to take a different train, but did not cancel his booking. He retains the unused ticket to this day, though is looking to donate it to a museum if possible.