CONSPIRACY NIGHT AT THE MOVIES: Yangtse Incident: The Story of H.M.S. Amethyst

We know the USS Liberty. Now fight back. Who dares wins. They dared. They won against overwhelming odds. See how the communists work. Look at today the election, the disease. In the movie, it was the terms. Agree to our reality or die. NUTS!

Yangtse Incident: The Story of H.M.S. Amethyst (1957) is a British war film that tells the story of the British sloop HMS Amethyst caught up in the Chinese Civil War and involved in the 1949 Yangtze Incident. Directed by Michael Anderson, it stars Richard Todd, William Hartnell, and Akim Tamiroff.

It was based upon the book written by Lawrence Earl. The film was known in the US by the alternative titles Battle Hell, Escape of the Amethyst, Their Greatest Glory and Yangtze Incident. Non-English language titles include the direct German translation of Yangtse-Zwischenfall, and Commando sur le Yang-Tse in France. In Belgium it was known as Feu sur le Yangtse (French) and Vuur op de Yangtse (Flemish/Dutch), both meaning "Fire on the Yangtse".

The film was entered into the 1957 Cannes Film Festival.

On 19 April 1949, the Royal Navy sloop HMS Amethyst sails up the Yangtze River on her way to Nanking, the Chinese capital, to deliver supplies to the British Embassy. Suddenly, without warning, People's Liberation Army (PLA) shore batteries open fire and after a heavy engagement, Amethyst lies grounded in the mud and badly damaged. HMS Consort attempts to tow Amethyst off the mud bank, but is herself hit several times and has to depart. A further rescue attempt by two other ships also comes under heavy fire and has to be aborted. 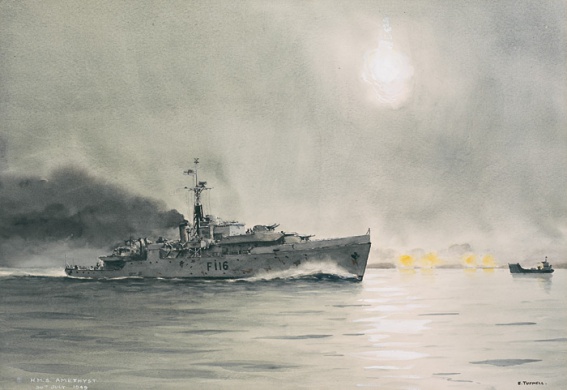 Fifty-four of Amethyst's crew are dead, dying or seriously wounded, while others deteriorate from the tropical heat and the lack of essential medicines, including the ship's captain, who dies of his wounds. An attempt to evacuate the wounded is only partially successful - the officers of the Amethyst become aware that two petty officers have been captured by the PLA and are being held at a nearby military hospital. Lieutenant Commander John Kerans (Richard Todd), a naval attaché in nearby Nanking, is ordered to go to the beleaguered ship and take command. 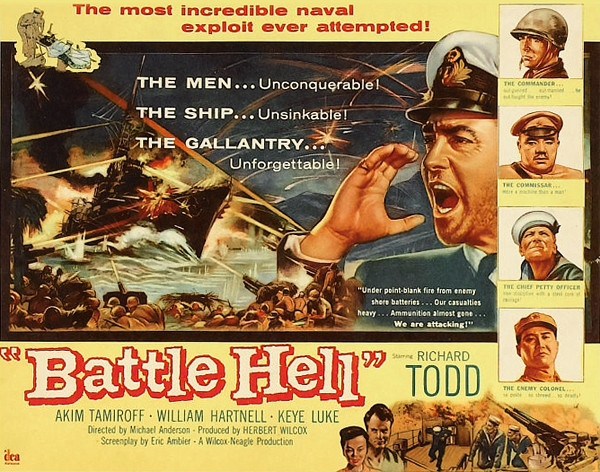 Kerans decides to risk steaming down the Yangtze at night without a pilot or suitable charts. Before they can leave, however, the local communist official Colonel Peng (Akim Tamiroff) makes contact with the Amethyst and at a meeting between senior officers makes his position clear: either the British government releases an apology accepting all responsibility for the entire incident, or the Amethyst will remain his prisoner. Similarly, he will not allow the two wounded sailors to leave unless they give him statements declaring the British to have been the transgressors, which they refuse to do. Kerans dismisses his demands but is able to manipulate Peng into the release of the Petty Officers; meanwhile, as talks progress he has the ship patched up and its engines restored. After some subtle alterations to the ship's outline to try to disguise her, Amethyst slips her cable and heads downriver in the dark following a local merchant ship, which Amethyst uses to show the way through the shoals and distract the PLA. When the shore batteries finally notice the frigate escaping downriver, the merchantman receives the brunt of the PLA artillery and catches fire, while Amethyst presses on at top speed. 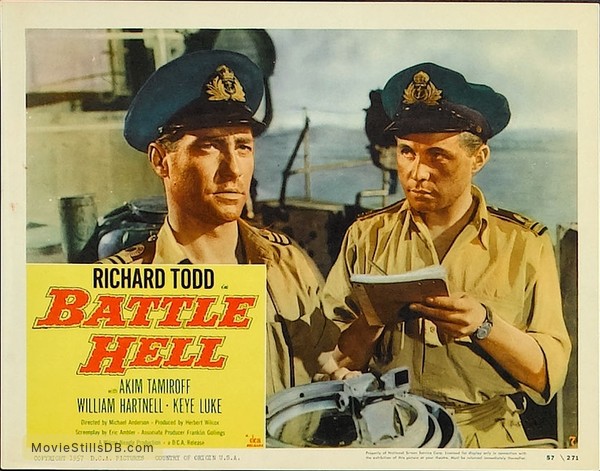 Encountering an obstruction in the river in the form of several sunken ships, and having no proper equipment for charting a safe course, Kerans uses both intuition and luck to slip through before then reaching the guns and searchlights of Woosung. After she is inevitably spotted, the Amethyst is forced into a lengthy fight with the PLA batteries as she flees with all guns blazing, heading for the mouth of the river just beyond. As day dawns, she finally reaches the open ocean, where she greets HMS Concord with the message "Never repeat never has another ship been so welcome". She also sends a signal to headquarters: "Have rejoined the fleet south of Woosung ... No major damage... No casualties....God save the King!" The film then ends with scrolling text reciting verbatim the message sent the very same day from King George VI, commending the crew for their "courage, skill and determination". 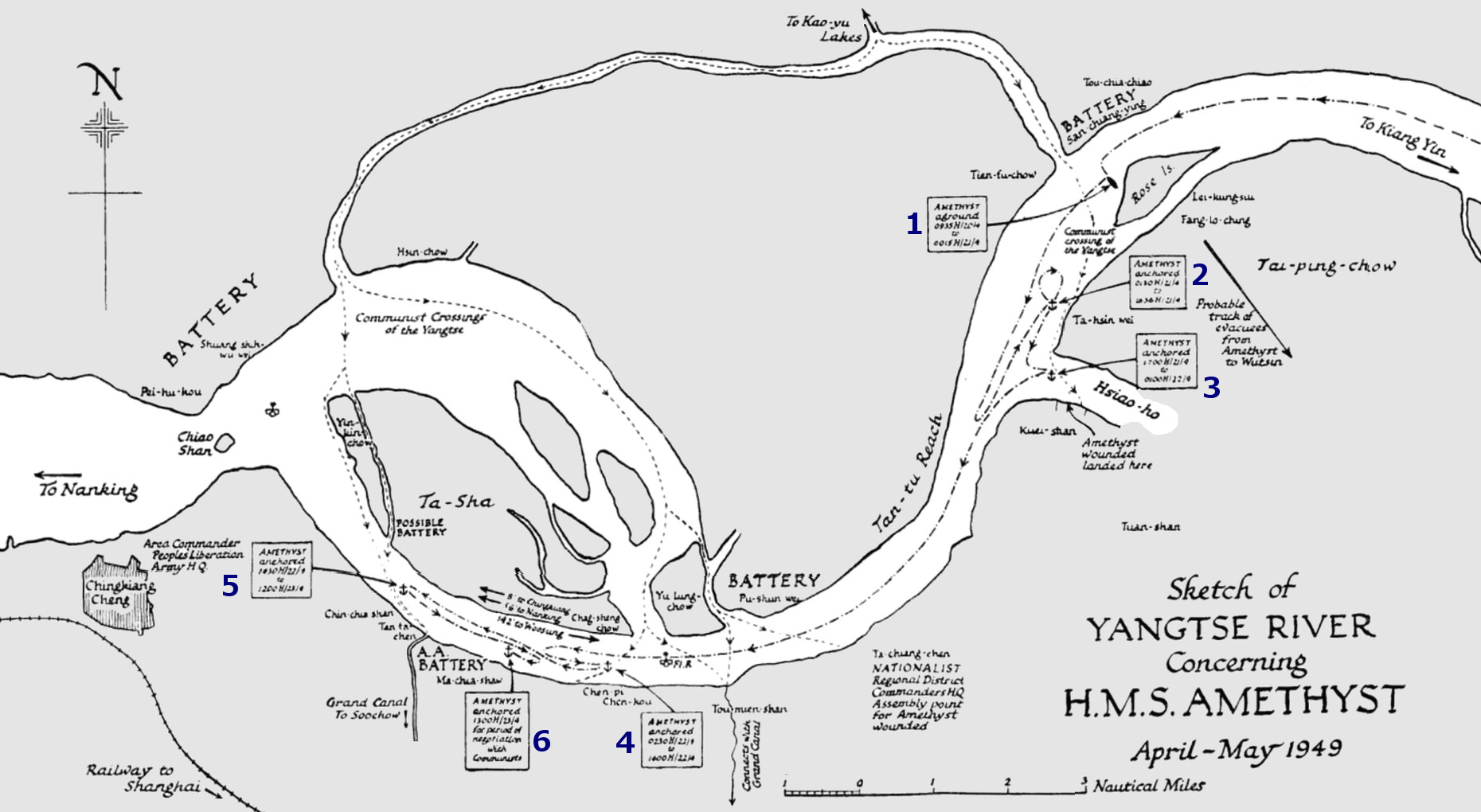