CONSPIRACY NIGHT AT THE MOVIES: The Caine Mutiny

A brilliant case study of people under pressure and the toxic boss. See how they run when authority has to be faced. Our young ensign passed away not too long after the film in a plane crash. HB shows himself the master actor leaving the usual hero role for this challenge. 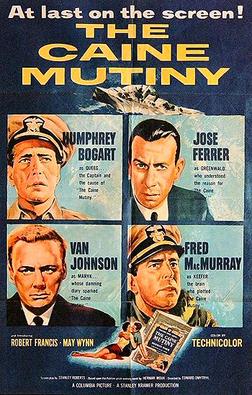 The Caine Mutiny is a 1954 American film. A fictional Navy drama set in the Pacific during World War II, it was directed by Edward Dmytryk and produced by Stanley Kramer, and stars Humphrey Bogart, José Ferrer, Van Johnson, and Fred MacMurray. The film is based on The Caine Mutiny, the 1951 Pulitzer Prize?winning novel written by Herman Wouk. It depicts the events on board a fictitious World War II U.S. Navy minesweeper and a subsequent court-martial for mutiny. 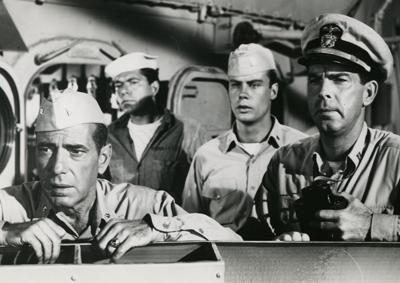 After a day of gunnery target towing, Queeg orders a turn to head back to Pearl Harbor, but distracts himself by berating Keith and Keefer over a crewman's appearance. Ignoring the helmsman's repeated warnings, he allows the Caine to turn in a full circle and cut the towline, setting the target adrift. Queeg tries to cover up the incident.

Assigned to escort a group of landing craft during an invasion of a small Pacific island, Queeg abandons his mission before he reaches the designated departure point, and instead orders the dropping of a yellow dye marker, leaving the landing craft to fend for themselves. Queeg asks his officers for their support, but they remain silent and nickname him "Old Yellowstain", implying cowardice.

Keefer, believing Queeg to be paranoid, encourages Maryk to consider relieving Queeg on the basis of mental incapacity under Article 184 of Navy Regulations. Though Maryk angrily rejects that possibility, he begins keeping a medical log documenting the captain's behavior.

When strawberries go missing from the officers' mess, Queeg convenes an elaborate investigation to determine the culprit, recalling an incident earlier in his career when he received a commendation for uncovering the theft of food. Despite the relative unimportance of the theft and the claim that the kitchen staff ate the missing strawberries, Queeg pushes ahead with his investigation, insisting that a duplicate cabinet key must have been made and used, and demanding an onerous search of the vessel.

Convinced of Queeg's instability, Maryk asks Keefer and Keith to go with him to see Admiral Halsey about the matter. Arriving aboard Halsey's flagship, Keefer backs down, telling the others that Queeg's actions will be interpreted as attempts to instill discipline. As they leave, an aide tells them that a typhoon is approaching.

At the height of the storm, Maryk urges the captain to reverse course into the wind and take on ballast, but Queeg refuses, having received no order from the fleet to change course or to maneuver at will. The ship's foremast and radar are carried away and the forward stack smashed by waves. The stern comes completely out of the water, the screws racing, and the destroyer takes alarming rolls that threaten to capsize her. Concerned that the ship will founder, the crew look to Queeg for guidance, but he appears to be frozen, either by indecision or fear. With Keith's support, Maryk relieves Queeg of command. At the court-martial, Keefer lies on the stand, claiming he never observed any mental illness in Queeg and never counseled Maryk to relieve him. A Navy psychiatrist testifies that Queeg is fit for command, but during Greenwald's questioning confirms that Queeg shows symptoms of a paranoid personality. Under Greenwald's relentless cross-examination, Queeg exhibits odd behavior on the stand – which he himself eventually realizes reflects badly on him – and Maryk is acquitted.

Following the acquittal, the officers of the Caine hold a party, where Keefer receives a frosty reception from Maryk. A drunken Greenwald arrives and berates the officers for not appreciating Queeg's long service and failing to give him the support he asked for. He denounces Keefer as the real "author" of the mutiny, a man who "hated the Navy" and manipulated others while keeping his own hands clean. He then throws a glass of champagne in Keefer's face and departs, followed by the rest of the officers, leaving Keefer alone in the room.

After the court-martial, Keith is assigned to a new destroyer commanded by the Caine's first captain, Commander De Vriess.