CONSPIRACY NIGHT AT THE MOVIES: The Sea Chase 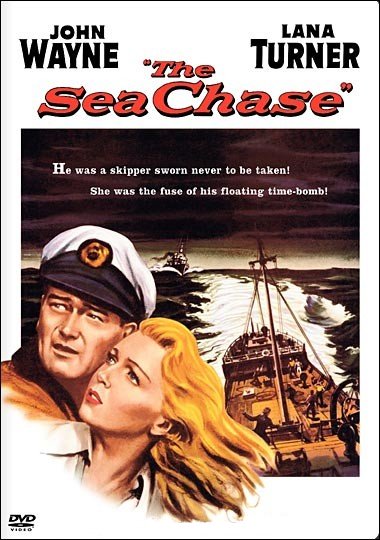 The Sea Chase is a 1955 World War II drama film starring John Wayne and Lana Turner, David Farrar, Lyle Bettger, and Tab Hunter. It was directed by John Farrow from a screenplay by James Warner Bellah and John Twist based on the novel of the same name by Andrew Geer. The plot is a nautical cat and mouse game, with Wayne determined to get his German freighter home during the first few months of the war, all the while being chased by British and Australian naval ships.

Captain Karl Ehrlich (John Wayne) is the master of the elderly German steam freighter Ergenstrasse, in port at Sydney, Australia on the eve of the Second World War. Ehrlich is depicted as a patriot, a former career naval officer who lost his rank and position after falling out of favour with the current regime and refusing to support the Nazi Party. As his ship prepares for sea (or to be interned if war is declared) he meets with an old friend, British Commander Jeff Napier (David Farrar) and his fiancée Elsa Keller (Lana Turner). Germany has invaded Poland, and war is imminent. As his ship prepares to slip away, Ehrlich receives a visit from the German Consul-General, who asks him to take with him a spy to prevent the spy's capture. It is only after the Ergenstrasse slips out of harbour in thick fog that Ehrlich discovers the spy is in fact Keller.

Old, slow, short on coal, the Ergenstrasse is seen as easy prey by the Australian Navy, and by Napier in particular, who understandably holds a grudge. But Napier is the only man who does not underestimate Ehrlich as the wily Captain leads his enemies on a chase across the Pacific Ocean, beginning with a run to the south to throw off pursuit, and pausing for supplies at an unmanned rescue station on Auckland Island. While there, Ehrlich's first officer, the pro-Nazi Kirchner (Lyle Bettger), murders three marooned seamen but does not tell the captain about it. Napier discovers the bodies while in pursuit and believes his old friend is responsible. He vows to bring the German to justice as a war criminal.

Ehrlich burns the ship's lifeboats for fuel, upsetting the crew, then stops for wood at the fictitious Pom Pom Galli Atoll in mid-Pacific. While there Ehrlich discovers that Kirchner murdered the fishermen and forces him to sign an account of his actions in the ship's log. The ship arrives at Valparaíso in neutral Chile, and Ehrlich encounters Napier, as his ship HMAS Rockhampton has pursued him from New Zealand.

Luck is with them as the Ergenstrasse, re-provisioned and fuelled, slips away in the darkness; the British forces waiting for them have been called away in support of the cruisers facing the German pocket battleship Graf Spee at Montevideo, Uruguay. Napier requests a transfer to the British Naval patrols in the North Sea, believing that Ehrlich must pass through the patrols in his attempt to reach Kiel.

For political reasons, German radio broadcasts a message from Lord Haw Haw that discloses the position of the Ergenstrasse as it passes Norway, thus giving up the ship and crew to the Royal Navy and to the waiting Napier, as his swifter passage home places the corvette under his command in Ehrlich's path. Napier tracks down Ehrlich's ship and sinks it in the North Sea, with Elsa and Ehrlich aboard, and with Kirchner as an unwilling participant in the short, one-sided battle. The ship's log is handed over to Napier by the survivors and proves Ehrlich innocent of the Auckland incident.