CONSPIRACY NIGHT AT THE MOVIES: The Final Cut

And what if you found out and were exposed to the deepest secrets of the powers that be? They pay you well. You are popular, loved and admired. All you have to do is pretend everything is all on the level. There are no demons among us, but you know the truth and are a moral man. It eats you up inside. You use the arts as you understand them to get the message out. It is largely missed. They say you have depression. You find solace in drugs and alcohol. The lie is too much to bear. At the Cafe we analyze The Final Cut of Robin Williams. You can too. 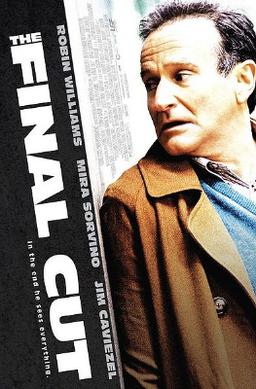 The Final Cut is a 2004 science-fiction thriller film written and directed by Omar Naim. It stars Robin Williams, Jim Caviezel, Mira Sorvino, Mimi Kuzyk, Stephanie Romanov, Genevieve Buechner and Brendan Fletcher. The film takes place in a setting where memory implants make it possible to record entire lives. Williams plays a professional who specializes in editing the memories of unsavory people into uncritical memorials that are played at funerals.

A brief introduction describes "cutters", who edit the collected memories of the recently dead into feature length memorials that are viewed by loved ones at funerals. Their code forbids them to have the requisite implant or to sell memories.

The film opens with Alan Hakman as a child. While visiting a city with his parents, he meets another boy, Louis, and the two bond as they play together. Louis reluctantly joins Hakman in exploring an abandoned factory, and Hakman crosses a wooden plank suspended high above the ground. Goaded by Hakman, Louis also attempts to cross the plank, but he loses his confidence and falls. Hakman races to the ground and panics when he steps in Louis' blood. Hakman flees the scene and tells no one what happened. Later that day, he leaves the city with his parents.

Years later, Hakman is a skilled cutter who specializes in editing the memories of controversial people into hagiographies. When Fletcher, a former cutter, confronts him at a funeral, Hakman describes himself as a sin-eater who brings redemption to the immoral. Fletcher offers him $500,000 for the memories of Charles Bannister, his latest client, but Hakman refuses. In a later meeting, Fletcher demands the memory recordings so that he can use Bannister, whom he suspects to be a child molester, as a scandal to shut down EYE Tech. Hakman again refuses, and, worried for his safety, uses his knowledge from memory tapes to shake down a shady criminal for a pistol.

As Hakman works through Bannister's memories, he encounters a scene that insinuates that Bannister was molesting his daughter. Hakman wordlessly deletes it and presses on. He eventually comes upon a person that he is convinced must be his childhood friend Louis. Excited, he sets up a meeting with Bannister's family to find out more information. Bannister's wife is dismissive, but his daughter reveals that the man, recently dead of a car crash, was a teacher named Louis Hunt. Hoping that Hunt had an implant, Hakman organizes a break-in at EYE Tech, but they have no record of Hunt. Instead, Hakman finds a file on himself, which he is surprised to find documents his parents' purchase of an implant for him.

In his distress, Hakman turns to his lover, Delila. At his apartment, he shows her the equipment that he uses to view memories, and he demonstrates surreal footage from a defective implant. He leaves her alone as he seeks help from anti-implant protestors, who have discovered a way to block the implant through specialized body modification. When he returns to his apartment, he assumes that Fletcher has broken in; instead, Delila confronts him after having found memory tapes that document her prior relationship. She accuses him of voyeurism and angrily destroys his memory viewer, which results in Bannister's files also being damaged.

Fletcher and his associate finally break in, but they find nothing. Hakman tells Bannister's wife that the footage was lost in an accident, and she feigns disappointment, content to let dirty secrets stay hidden. Hakman recruits his colleagues to recover live footage, a potentially deadly process. The resulting memories show Hakman attempt to dissuade Louis from crossing the plank and stepping in red paint, not blood. Hakman, relieved, visits Hunt's grave but is confronted again by Fletcher, who has learned about Hakman's implant. After chasing Hakman through the graveyard, he hesitates and seems willing to let Hakman go; however, Fletcher's associate kills Hakman.

In the last scene, Fletcher loads Hakman's memories into a viewer and promises to use them for the greater good. As he pages through Hakman's memories, looking for evidence of Bannister's guilt, he sees Hakman watching himself in a mirror, and the memory implant lingers on the scene after Hakman has left.