CONSPIRACY NIGHT AT THE MOVIES: The Four Feathers

This is a great film a remake of a previous classic that's a coin toss as to which is the better. It is the story of true heroism and loyalty.When Harry is struggling in the desert Abou helps him. Though Abou is a Muslim and Harry an Englishman whose countrymen are invading his land, he helps him. When Harry asks why? Abou said because God put you in my way. In the immense desert their paths crossed. Abou followed loyally right into prison. It says a lot about God and that people cross our paths as part of his divine plan. See that at the very least. ENJOY! Heath Ledger was most likely a Hollywood sacrifice. We did a show on that. 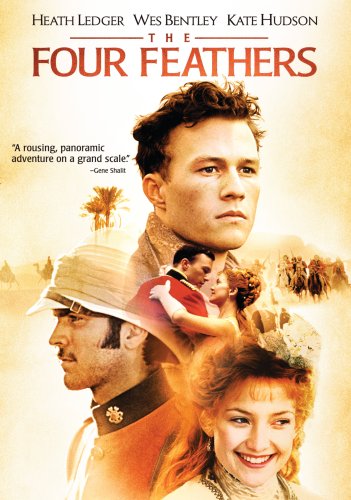 The Four Feathers is a 2002 action drama film directed by Shekhar Kapur, starring Heath Ledger, Wes Bentley, Djimon Hounsou and Kate Hudson. Set during the British Army's Gordon Relief Expedition (late 1884 to early 1885) in Sudan, it tells the story of a young man accused of cowardice.

This film, with altered plot events, is the latest in a long line of cinematic adaptations of the 1902 novel The Four Feathers by A.E.W. Mason. Other versions of the story have been set in the 1890s, with different battle events.

Harry Faversham (Heath Ledger), a young British officer completing his training, celebrates his engagement to the beautiful young Ethne (Kate Hudson), in a lavish ball with his fellow officers and his father in attendance. When the regimental Colonel (James Cosmo) announces that the regiment is being dispatched to Egyptian-ruled Sudan to rescue the British General Charles "Chinese" Gordon (who is being besieged in Khartoum by Islamic rebels of the Mahdi), young Faversham has serious ethical reservations about the war, and resigns his commission. Shocked by his son's actions, Harry's father (Tim Pigott-Smith) disowns him. Perceiving his resignation as cowardice, three of his friends and his fiancée each give him a white feather, the symbol of cowardice. Ethne breaks off their engagement.

Tormented, isolated and alone in London, Harry learns that his best friend Jack (Wes Bentley) and his former regiment have come under brutal attack by rebels. Undertaking the perilous journey into the Sudan alone, he strikes up an alliance with Abou Fatma (Djimon Hounsou), a wise mercenary warrior. Harry disguises himself as an Arab. Harry and Abou Fatma follow a group of army workers he believes to be Mahdi spies, and reach the garrison of Abu-Klea (near Khartoum), which they realise on entry has been overrun. Before they can leave, the gates are closed. Harry is taken roughly aside; he begs Abou Fatma to warn his friends that their destination is under siege and an attack is likely. Instead of being discovered, Harry is given a red British army jacket.

Meanwhile the regiment stopped its march to bury a group of British dead killed by the Mahdi. Abou Fatma is captured by Egyptian soldiers; believing he is an enemy scout, they bring him before the British officers (Faversham's friends). He tells the British that he has been sent by a British officer, referring to Faversham, in order to warn them of the Mahdi's attack. He says that Muslims always bury their dead and that of the enemy, but that these bodies have been left to keep the British occupied. Faversham's comrades are worried, but ultimately they disregard Abou Fatma's warnings and he is flogged as a suspected spy.

The British and Egyptian troops are not prepared for battle. The Mahdi rebels attack with spearmen, riflemen and cavalry, while the British forces form a defensive square. Firing volley after volley, the British repel the initial Mahdi assault just as they spot British cavalry reinforcements in their distinctive red uniforms. A force of skirmishers is sent to pursue the retreating Sudanese, but they are ambushed by Mahdi rebels and forced to fight on foot. Soon the British discover that the cavalry whom they thought were reinforcements are Sudanese disguised in British uniforms. Among them is Faversham. The British square hastily reorganises and fires a few volleys, in the process killing several skirmishers who have not yet returned to the square (including Harry's friend Edward Castleton (Kris Marshall), who had given him a feather.) The British issue an order for retreat. Harry found Jack during the battle and protected him after he was blinded. Harry finds tender letters from Ethne to Jack, but nonetheless cares for his friend without identifying himself. Never knowing his rescuer, Jack is transported to England. He asks Ethne to marry him, but she does not answer. First she discusses it with Harry's father.

Tom, another officer tells Jack that Harry had visited him in the Sudan and told him he had sent Abou to warn the British, and was bitter that his friends had not heeded him. Harry asked Tom for money and explained that he believes Trench lives on in the notorious Mahdi prison of Omdurman, saying he believed Trench was still being held in the Mahdi prison, and he was determined to rescue him. Abou advised Harry against this venture, but he goes anyway. Later Abou rescues Harry and Trench by giving them a 'poison' to fake their deaths. A suspicious guard follows the removal of the bodies, along with three other guards. Harry and Abou kill the four. Abou returns to the desert, and Harry escorts Trench back to Britain. Harry is acknowledged by his father and Ethne reclaims her feather, as Harry has so proved his bravery. She has become engaged to Jack.

Jack learns that Harry was his rescuer when he happens to touch his face; he releases Ethne from their engagement. After a ceremony of remembrance, Harry and Ethne hold hands and are engaged again.