There is a great deal of political pressure on the Sheriff. Evil tries to gain control of Constitutional authority. It doesn't come easy. When faced with that evil you have to walk tall in the ultimate faith journey. I understand the pressures. I've walked the line too. I carried the super large police flashlight as opposed to the giant stick. Now I practice the other dangerous duty of reporter of news that is unspun. It is another faith journey. 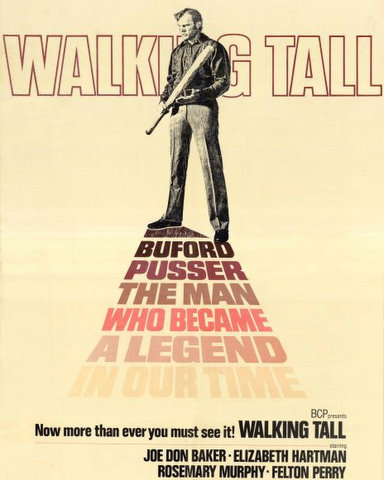 Walking Tall is a 1973 American action semi-biopic film of Sheriff Buford Pusser, a former professional wrestler-turned-lawman in McNairy County, Tennessee. It starred Joe Don Baker as Pusser. The film was directed by Phil Karlson.[2] Based on Pusser's true story, it was a combination of very loosely based fact and Hollywood revisionism. It has since become a well known cult classic (with two direct sequels of its own, a TV movie, A Real American Hero, and a brief TV series, also called Walking Tall).

Pusser, at his wife Pauline's behest, retires from the professional wrestling ring and moves back to Tennessee to start a logging business with his father, Carl Pusser. With a friend, he visits a gambling and prostitution establishment, the Lucky Spot, and is beaten up after catching them cheating at craps. Pusser is seriously injured with a knife and receives over 200 stitches. He complains to the sheriff but is ignored, and soon becomes aware of the rampant corruption in McNairy County. Later, working at his dad's lumber mill, Pusser makes a club out of a tree branch. Late one night, Pusser waits until after the Lucky Spot is closed, and beats up the same thugs that left him for dead. The next day, Pusser is arrested and represents himself at trial. At one point, he rips off his shirt and shows the jury his scars. He informs them that "If you let them do this to me and get away with it, then you're giving them the eternal right to do the same damn thing to any one of you!" The jury finds Pusser innocent, and he decides to clean up the county and runs for sheriff. Buford Pusser wins, and becomes famous for being incorruptible, intolerant of crime, and for his array of four foot hickory clubs which he uses to great effect in dispatching criminals and destroying their clandestine gambling dens and illegal distilleries.

Some residents praise Buford Pusser as an honest cop in a crooked town; others denounce him as a bully willing to break some laws to uphold others. Pusser is attacked several times, and finally he and Pauline are ambushed in their car. Pauline is killed and Pusser is seriously injured. He is admitted to the hospital after being shot and while still in a neck and face cast, attends his wife's funeral with his family. Afterward he rams a sheriff cruiser through the front doors of the Lucky Spot, killing two of his would-be assassins.

As he leaves with two deputies, the townspeople arrive and begin throwing the gambling tables out into the parking lot. They light a bonfire as an overwhelmed Pusser wipes tears from his eyes.