CONSPIRACY NIGHT AT THE MOVIES: The Boys from Brazil 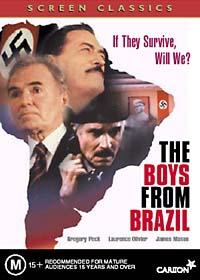 The Boys from Brazil is a 1978 British-American thriller film directed by Franklin J. Schaffner. It stars Gregory Peck and Laurence Olivier and features James Mason, Lilli Palmer, Uta Hagen and Steve Guttenberg in supporting roles. The screenplay by Heywood Gould is based on the novel of the same name by Ira Levin.

The film was produced by Martin Richards and Stanley O'Toole with Robert Fryer as executive producer. The music score was by Jerry Goldsmith and the cinematography by Henri Decaë. It was produced through Sir Lew Grade's ITC Entertainment and distributed by 20th Century Fox. It was nominated for three Academy Awards.

The film was shot on location in Austria, England, Portugal, and Lancaster, Pennsylvania. It was Schaffner's second sci-fi film, appearing ten years after Planet of the Apes. 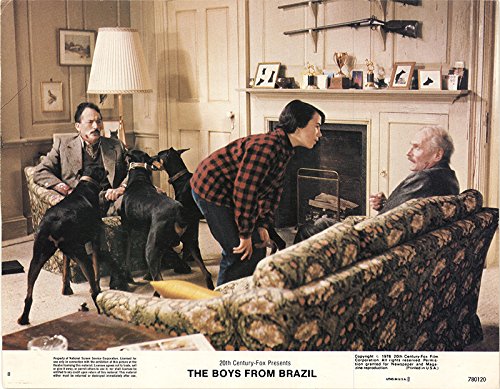 Young, well-intentioned Barry Kohler (Steve Guttenberg) stumbles upon a secret organization of Third Reich war criminals holding clandestine meetings in Paraguay and realizes that Dr Josef Mengele (Gregory Peck), the infamous Auschwitz doctor, is among their number. He phones Ezra Lieberman (Laurence Olivier), an aging Nazi hunter living in Austria, with this information. A highly skeptical Lieberman tries to brush Kohler's claims aside, telling him that it is already well known that Mengele is living in Paraguay.

Having learned when and where the next meeting to include Mengele is scheduled to occur, Kohler records part of it using a hidden microphone, but is discovered and killed while making another phone call to Lieberman. Before the phone is hung up with Lieberman on the other end, he hears the recorded voice of Mengele ordering a group of ex-Nazis to kill 94 men in different countries, including Austria, Germany, Denmark, Holland, Norway, Sweden, Canada, Great Britain and the U.S.

Although frail, Lieberman follows Kohler's leads and begins travelling throughout Europe and North America to investigate the suspicious deaths of a number of aging civil servants. He meets several of their widows and is amazed to find an uncanny resemblance in their adopted, black-haired, blue-eyed sons. It is also made clear that, at the time of their deaths, all the civil servants were aged around 65 and had a cold, domineering and abusive attitude towards their adopted sons, while their wives were aged around 42 and doted on the sons. Lieberman gains insight from Frieda Maloney (Uta Hagen), an incarcerated former Nazi guard who worked with the adoption agency, before realizing during a meeting with Professor Bruckner (Bruno Ganz), an expert on cloning, the terrible truth behind the Nazi plan: Mengele, in the 1960s, had secluded several surrogate mothers in a Brazilian clinic and fertilised them with ova each carrying a sample of Hitler's DNA preserved since World War II. 94 perfect clones of Hitler had then been born and sent to different parts of the world for adoption.

As Lieberman uncovers more of the plot, Mengele's superiors become more unnerved. After Mengele happens to meet (and then attacks) one of the agents he believes is in Europe implementing his scheme, Mengele's principal contact, Eduard Seibert (James Mason), informs him that the scheme has been aborted before Lieberman can expose it to the authorities. Mengele storms out, pledging that the operation will continue.

Seibert and his men destroy Mengele's jungle estate after killing his guards and servants. Mengele himself, however, has already left, intent on trying to continue his plan. He travels to rural Lancaster County, Pennsylvania, where one of the Hitler clones, Bobby Wheelock (Jeremy Black), lives on a farm with his parents. There he murders the boy's father (John Dehner), a Doberman dog breeder, and waits for Lieberman, who is on his way to the farm to warn Mr. Wheelock of Mengele's intention to kill him.

The instant Lieberman arrives and sets eyes on Mengele, he attacks the doctor in a fury. But Mengele soon gains the upper hand and holds him at gunpoint. He taunts Lieberman by explaining his plan to return Hitler to the world. Then, with one desperate lunge, Lieberman opens the closet where the Dobermans are held and turns them loose. The dogs corner Mengele and begin to attack him. At that point, Bobby arrives home from school. It is Mengele's first look at one of his clones. Bobby calls off the dogs and tries to find out what has happened.

Bobby can tell from the carnage that something is amiss. The injured Mengele tells Bobby how much he admires him, and explains that he is cloned from Hitler. But Bobby doubts his story and is also suspicious because the dogs are trained to attack anyone who threatens his family. Lieberman tells Bobby that Mengele has killed his father and urges him to notify the police. Bobby checks the house and eventually finds his dead father in the basement. He rushes back upstairs and sets the vicious dogs on Mengele once again, relishing his bloody death. Bobby reasons aloud that the safest thing for himself would be for him to let the wounded Lieberman die, but decides to help Lieberman anyway, as Lieberman promises not to tell the police about the incident. They shake hands on the deal.

Later, while recovering from his wounds, Lieberman is encouraged by an American Nazi-hunter, David Bennett (John Rubinstein) to expose Mengele's scheme to the world. He asks Lieberman to turn over the list (which Lieberman had taken from Mengele's body while Bobby was calling for an ambulance) identifying the names and whereabouts of the other boys from around the world, so that they can be systematically killed before growing up to become bloody tyrants. Lieberman objects on the grounds that they are mere children. He burns the list before anyone can read it.