4. Rossland - Known as "The Golden City", Rossland grew to be the fourth largest city in B.C. One mine alone produced over $600 million worth of gold in today’s terms.

Rossland is a city in the West Kootenay region of British Columbia, Canada. Tucked high in the Monashee Mountains, Rossland is at an elevation of 1023 metres (3356 feet). Its population is 3729, though it fluctuates from season to season. The population is at its peak during the winter. Rossland has been known as the 'Mountain Bike Capital of Canada' since 1993 when it was awarded this title[by whom?], with an extensive trail system radiating from the outskirts of the town. Also nearby is the multi-peak ski hill, Red Mountain Resort. The origin of the toponym Rossland comes from the name of a miner, Ross Thompson, who staked a claim in 1890. He had tried to call the city Thompson, but he was advised that there was already a town with that name.

In 1897, as a result of a gold rush, Rossland for a time was one of Western Canada's largest cities. A number of historic buildings survive from this time. 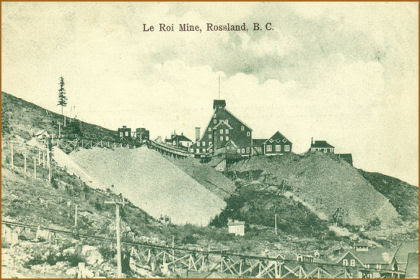 By 1907, Rossland was home to a local branch of the Western Federation of Miners.

In 1929 Doukhobor firefighters were sent from Rossland to Gold Creek Basin in Washington State to fight a forest fire. Two of the men discovered a Lost Mine called the Lost Doukhobor Ledge.

The Rossland Court House was designated a National Historic Site of Canada in 1980.

Carbide lamps, or acetylene gas lamps, are simple lamps that produce and burn acetylene (C2H2) which is created by the reaction of calcium carbide (CaC2) with water (H2O).

Acetylene gas lamps were used to illuminate buildings, as lighthouse beacons, and as headlights on motor-cars and bicycles. Portable acetylene gas lamps, worn on the hat or carried by hand, were widely used in mining in the early twentieth century. They are still employed by cavers, hunters, and cataphiles. Small carbide lamps called "carbide candles" or "smokers" are used for blackening rifle sights to reduce glare. They are used because of the sooty flame produced by acetylene.