Adelson was Earl Ruby's lawyer, and the probate attorney for Jack Ruby's will. He died of pneumonia soon after finishing his book, The Ruby-Oswald Affair, which was published after his death. In 1967 he had told the Texas press, "My chief job is to continue vindicating Jack Ruby's name." He didn't know who Jack was until after the assassination, though he had worked as Earl's lawyer before 1963. He never actually met Jack, but interviewed his family to put together a biography. Much of the book contains a lot of uninteresting details about his involvement with Jack's will, and sticks to the official story of lone-nut-killing-another-lone nut. 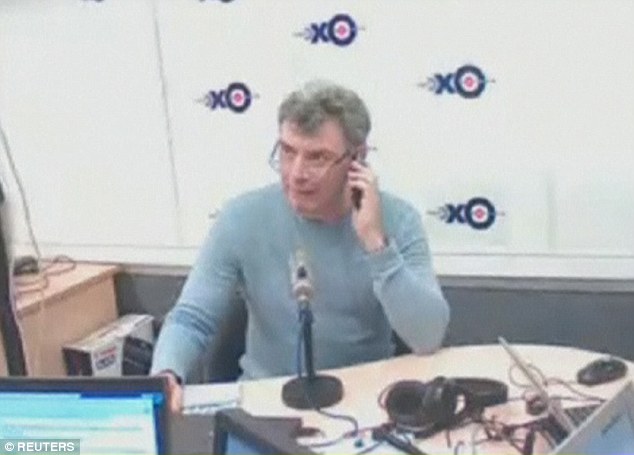 Mr Nemtsov was seen speaking on his mobile phone at a radio station, just hours before he was killed

(Don't the marks on the wall resemble targets?)

TWILIGHT LANGUAGE FROM THIS SHOW 1:14:25

14 And Enoch also, the seventh from Adam, prophesied of these, saying, Behold, the Lord cometh with ten thousands of his saints,

15 To execute judgment upon all, and to convince all that are ungodly among them of all their ungodly deeds which they have ungodly committed, and of all their hard speeches which ungodly sinners have spoken against him.

16 These are murmurers, complainers, walking after their own lusts; and their mouth speaketh great swelling words, having men's persons in admiration because of advantage.

17 But, beloved, remember ye the words which were spoken before of the apostles of our Lord Jesus Christ;

18 How that they told you there should be mockers in the last time, who should walk after their own ungodly lusts.

19 These be they who separate themselves, sensual, having not the Spirit.

20 But ye, beloved, building up yourselves on your most holy faith, praying in the Holy Ghost,

21 Keep yourselves in the love of God, looking for the mercy of our Lord Jesus Christ unto eternal life.

22 And of some have compassion, making a difference:

23 And others save with fear, pulling them out of the fire; hating even the garment spotted by the flesh.

24 Now unto him that is able to keep you from falling, and to present you faultless before the presence of his glory with exceeding joy,

25 To the only wise God our Saviour, be glory and majesty, dominion and power, both now and ever. Amen.