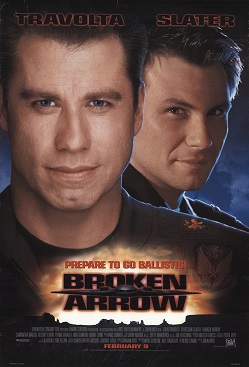 Broken Arrow is a 1996 American action film directed by John Woo, written by Graham Yost, and starring John Travolta and Christian Slater. It deals with the theft of two American nuclear weapons.

Major Vic "Deak" Deakins (John Travolta) and Captain Riley Hale (Christian Slater) are pilots in the United States Air Force. After a sparring match between the two, the pilots are assigned to a top secret exercise on a B-3 Stealth Bomber (a fictional advanced version of the actual B-2 Spirit stealth bomber) with two B-83 nuclear bombs on board. Deakins and Hale take off from Whiteman Air Force Base carrying the two live nuclear weapons on an evening exercise over Utah.

After successfully evading Air Force radar during the exercise, Deakins begins a friendly conversation to distract and shoot Hale. A struggle ensues, ending when Deakins ejects Hale. He then releases the bombs from the plane without detonating them. When the Air Force base regains radar contact with the aircraft, Deakins reports, "Hale's lost it. I'm punching out", and ejects, leaving the plane to crash on the mountainside over the Utah canyons.

A search and rescue team is sent to recover the warheads. They do not find the warheads in the plane's payload bay remains and report a "Broken Arrow", a situation wherein nuclear weapons are missing. The team later locates the warheads in a canyon but are killed while recovering them by mercenaries, including Kelly (Howie Long), a corrupt member of the team. Deakins arrives moments later and plots his next move with Pritchett (Bob Gunton), the operation's financier.

Meanwhile, Hale survives the ejection and is found by Park Ranger Terry Carmichael (Samantha Mathis) whom, after a brief stand-off, he convinces to help him track down Deakins and foil his plot. After recovering the weapons from a hijacked Humvee and escaping to a nearby copper mine, Hale attempts to disable them using a safety feature which would render them unusable, by intentionally entering the arming code incorrectly. Deakins, however, had anticipated this scenario, and Hale inadvertently arms the warhead.

Finding himself unable to disarm the warhead, Hale decides to place the unarmed weapon deep in the abandoned mine to prevent them from being used elsewhere. Deakins arrives and secures the unarmed warhead, leaving Hale and Terry to die in the upcoming explosion. A helicopter chases Deakins, as the mercenaries proceed with their mission to blackmail the government with the threat of detonating the warhead in a civilian area. Pritchett berates him for allowing the helicopter to give chase, and Deakins, fed up with his complaining, kills Pritchett by crushing his throat with a flashlight. Hale and Terry escape from the mine via an underground river just before the bomb detonates. The bomb's EMP disables and subsequently destroys the NEST Team sent in to recover the warheads. Terry and Hale track Deakins to a motorboat to be used for transporting the remaining warhead. While trying to steal the boat, Terry is forced to hide on board while Deakins moves the warhead. Military forces rescue Hale.

Hale deduces that Deakins intends to move the warhead on board a train and sets off in a helicopter to find the train and hunt down the remaining mercenaries. Aboard the train, Hale finds Terry, whom Deakins has tried, unsuccessfully, to threaten into arming the weapon. A gunfight ensues in which the helicopter that Hale was on with Colonel Wilkins (Delroy Lindo) is destroyed, and Wilkins and most of Deakins' mercenaries are killed. With his own helicopter sabotaged by Hale and his plan falling apart, Deakins decides to detonate the nuke early. Kelly, realizing they will have no chance to get away in time, holds Deakins at gunpoint and demands he disarm the weapon. As the train passes over a viaduct, Hale leaps into the boxcar and kicks Kelly out to his death below. Deakins, still in possession of a device that can either disarm or detonate the bomb instantly, forces Hale to drop his gun and challenges him to a hand-to-hand fight. Hale uses his greater speed to match Deakins' strength, leaps out of the train with the weapon's remote control, and disarms it. As he does so, a detached train car slams into the boxcar from behind caused by Terry shooting the train engineer and him falling on the train brakes thus making the train stop. The impact from the collision propels the disarmed warhead into Deakins, and the entire train derails, exploding in a fireball, incinerating Deakins.

Hale survives and finds a 20-dollar bill fluttering on a twig in the debris - the same 20-dollar bill Deakins had won from him earlier during their boxing practice - plus the nuclear warhead, damaged but intact. He then finds Terry and they formally introduce themselves to each other amidst the wreckage.