CONSPIRACY NIGHT AT THE MOVIES: The Fighting Seabees

The Fighting Seabees is a 1944 war film starring John Wayne and Susan Hayward. The picture portrays a heavily fictionalized account of the dilemma that led to the creation of the U.S. Navy's "Seabees" in World War II. The supporting cast includes Dennis O'Keefe and William Frawley, and the movie was directed by Edward Ludwig. 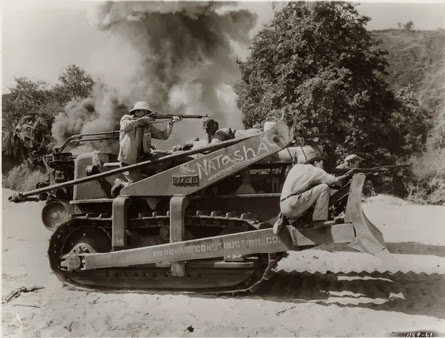 Wedge Donovan (John Wayne) is a tough construction boss, building airstrips in the Pacific for the U.S. Navy during World War II. He clashes with his liaison officer, Lieutenant Commander Robert Yarrow (Dennis O'Keefe), over the fact that his men are not allowed to arm themselves against the Japanese. When the enemy lands in force on the island, he finally takes matters into his own hands, leading his men into the fray. This prevents Yarrow from springing a carefully devised trap that would have wiped out the invaders in a murderous machinegun crossfire, with minimal American losses. Instead, many of Donovan's men are killed unnecessarily.

As a result of this tragedy, Yarrow finally convinces the US Navy to form Construction Battalions (CBs, or the more familiar "Seabees") with Donovan's assistance, despite their mutual romantic interest in war correspondent Constance Chesley (Susan Hayward). Donovan and many of his men enlist and receive formal military training.

The two men are teamed together on yet another island. The Japanese launch a major attack, which the Seabees barely manage to hold off, sometimes using heavy construction machinery such as bulldozers and a clamshell bucket. When word reaches Donovan of another approaching enemy column, there are no sailors left to oppose this new threat. In desperation, he rigs a bulldozer with explosives on its blade, intending to ram it into a petroleum storage tank. The plan works, sending a cascade of burning liquid into the path of the Japanese, who retreat in panic, right into the sights of waiting machine guns.

THE MORAL OF THE STORY:

As any good soldier knows improvised weapons and equipment are very effective. Where the Seabees legacy is paramount is in the fact that they provided a role model on using heavy equipment in combat. Their resourcefulness makes this a good training film should the Republic ever face an enemy determined to vanquish her people or sovereignty. Another piece of heavy equipment in the millions and available everywhere is the forklift. Lightly armor plated these machines are a plethora of light tanks. In the thousands and tens of thousands, they are a powerful resource to keep America free. The term CUWV (Civilian Urban Warfare Vehicle) comes to mind. Should your island face a hostile invasion, remember the Seabees and give 'em HELL! 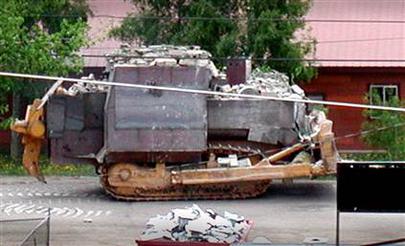 There have been applications of the concept in the modern day. Marvin John Heemeyer built the above to go on a rampage in 2004. There were other incidents as well.