The Battle of Athens (sometimes called the McMinn County War) was a rebellion led by citizens in Athens and Etowah, Tennessee, United States, against the local government in August 1946. The citizens, including some World War II veterans, accused the local officials of political corruption and voter intimidation. The event is sometimes cited by firearms ownership advocates as an example of the value of the Second Amendment in combating tyranny.

Citizens of McMinn County had long been concerned about political corruption and possible election fraud. The U.S. Department of Justice had investigated allegations of electoral fraud in 1940, 1942, and 1944, but had not taken action. In 1936 the system descended upon McMinn County in the person of one Paul Cantrell, the Democratic candidate for sheriff. Cantrell, who came from a family of money and influence in nearby Etowah, tied his campaign closely to the popularity of the Roosevelt administration and rode FDR’s coattails to victory over his Republican opponent. Paul Cantrell was elected sheriff in the 1936, 1938, and 1940 elections, and was elected to the state senate in 1942 and 1944, while his former deputy, Pat Mansfield, was elected sheriff. A state law enacted in 1941 had reduced local political opposition by reducing the number of voting precincts from 23 to 12 and reducing the number of justices of the peace from fourteen to seven (including four "Cantrell men"). The sheriff and his deputies worked under a fee system whereby they received money for every person they booked, incarcerated, and released; the more arrests, the more money they made. Buses passing through the county were often pulled over and the passengers were randomly ticketed for drunkenness, whether guilty or not.

In the August 1946 election, Paul Cantrell was once again a candidate for sheriff, while Pat Mansfield sought the state senate seat. After World War II ended, some 3,000 military veterans (constituting about 10 percent of the county population) had returned to McMinn County. Some of the returning veterans resolved to challenge Cantrell's political control by fielding their own nonpartisan candidates and working for a fraud-free election. They called themselves the GI Non-Partisan League. Veteran Bill White described the veterans' motivation:

There were several beer joints and honky-tonks around Athens; we were pretty wild; we started having trouble with the law enforcement at that time because they started making a habit of picking up GIs and fining them heavily for most anything—they were kind of making a racket out of it. After long hard years of service—most of us were hard-core veterans of World War II—we were used to drinking our liquor and our beer without being molested. When these things happened, the GIs got madder—the more GIs they arrested, the more they beat up, the madder we got ...

Combat veteran Knox Henry stood as candidate for sheriff in opposition to Cantrell. In advertisements and speeches, the GI candidates promised an honest ballot count and reform of county government. At a rally, a GI speaker said,

The principles that we fought for in this past war do not exist in McMinn County. We fought for democracy because we believe in democracy but not the form we live under in this county. 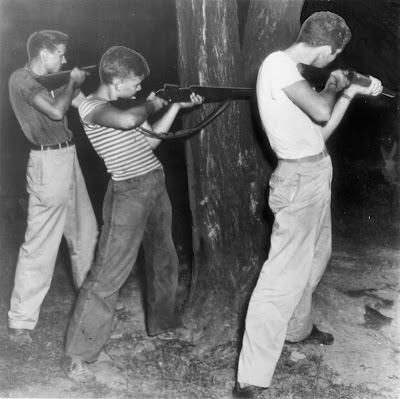 Polls for the county election opened August 1, 1946. About 200 armed deputies turned out to patrol the precincts—the normal complement of 15 deputies significantly augmented by reinforcements from other counties. A number of conflicts arose before the polls closed, the most serious of which was when a black man, Tom Gillespie, was assaulted by officers after casting his vote. Deputy C.M. Wise shot and wounded him in the back while he was trying escape from the officers. C.M. Wise was later sentenced to 1–3 years in prison, being the only person to face charges from the events of August 1–2, 1946.

As the polls closed, deputies seized ballot boxes and took them to the jail. Opposition veterans responded by arming themselves and marching there. Some of them had raided the National Guard Armory, obtaining arms and ammunition. Estimates of the number of veterans besieging the jail vary from several hundred to as high as 2,000.

When the men reached the jail, it was barricaded and manned by 55 deputies. The veterans demanded the ballot boxes but were refused. They then opened fire on the jail, initiating a battle that lasted several hours by some accounts, considerably less by others. In the end, the door of the jail was dynamited and breached. The barricaded deputies—some with injuries—surrendered, and the ballot boxes were recovered.

During the fight at the jail, rioting had broken out in Athens, mainly targeting police cars. This continued even after the ballot boxes were recovered, but subsided by morning.

The recovered ballots certified the election of the five GI Non-Partisan League candidates. Among the reforms instituted was a change in the method of payment and a $5,000 salary cap for officials. In the initial momentum of victory, gambling houses in collusion with the Cantrell regime were raided and their operations demolished. Deputies of the prior administration resigned and were replaced.

The new government encountered challenges including at least eleven resignations of county administrators. On January 4, 1947, four of the five leaders of the GI Non-Partisan League declared in an open letter: "We abolished one machine only to replace it with another and more powerful one in the making." The League failed to establish itself permanently and traditional political parties soon returned to power. 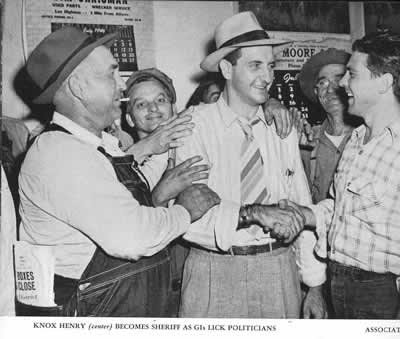 The 1992 made-for-television movie An American Story (produced by the Hallmark Hall of Fame) was based upon the McMinn County War but set in a Texas town in 1945. It was nominated for two 1993 prime time Emmy Awards and one American Society of Cinematographers award. The battle is also mentioned in the book Unintended Consequences.