WHY THEY SANK THE TITANIC 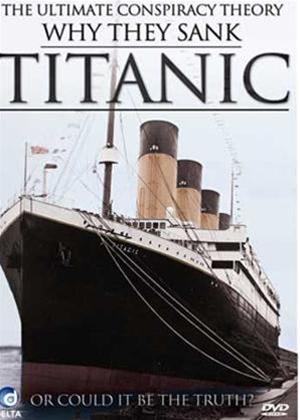 The TRUTH behind the sinking of the Titanic and the corruption surrounding its destruction. Evidence suggests the sunken vessel was in fact The Titanic's sister ship the Olympic.

'I can prove it was not Titanic that sank'

Robin Gardiner with a copy of his book

AS THE world tomorrow marks the centenary of the sinking of Titanic, Oxford author Robin Gardiner has released a new book that he says proves it is a sister ship that sits at the bottom of the North Atlantic.

The biggest ship of its kind, Titanic was billed ‘unsinkable’ by its owners White Star Line. But on April 15, 1912, it hit an iceberg and sank in the icy waters of the North Atlantic, with the loss of 1,517 lives However, according to Mr Gardiner, 64, the ship that sank was not Titanic at all – it was Olympic, her sister ship, in what was planned as one of the world’s greatest insurance frauds.

Mr Gardiner, 64, a plasterer and father-of-one from Barton, said: “My new book, The Great Titanic Conspiracy, has new, conclusive photographic and documentary evidence of the swap of Olympic and Titanic.

“This was collusion, conspiracy and cover-up on an unprecedented scale.

“The evidence is overwhelming; eyewitnesses themselves describe running along Titanic’s decks, but where they said there were promenades, there should have been cabins.

“And while survivors on B Deck described seeing lifeboats being lowered from above, there’s no way they would have seen that on Titanic – only on the ship Olympic.

'This was collusion, conspiracy and cover-up on an unprecedented scale'

“You only have to look at the ships’ specifications to see the ‘Titanic’ passengers were actually aboard Olympic.”

According to Mr Gardiner, the ‘real’ story starts with financier J P Morgan’s takeover of White Star and the Royal Navy’s investment in the company’s new liners as potential troop carriers.

He said: “Following the Agadir crisis in 1911, Morgan began to ship gold and other treasures back to the safe haven of the US.

“There was also pressure on White Star to make up the cost of the damage to Olympic, which had been damaged in a collision with HMS Hawke, but which the insurance company would not cover.

“Swapping the identities of Olympic and Titanic was also the opportunity for Morgan, with the collusion of the British government, to quietly ship £8m of gold to the US.

“But unbeknown to the government, the gold was spirited away.

“To the present day, the most common maritime insurance fraud involves changing identities of ships.

“But tragically the planned staging of the sinking of Titanic, whereby other ships from the company would be on hand to rescue all the passengers and crew, went disastrously wrong and more than 1,500 souls perished.”

Mr Gardiner even refutes that the ship hit an iceberg; “The passengers described feeling a ‘shudder’. But if that size ship, travelling at that speed had hit an iceberg of that size, the noise would have been huge and the impact would have hit everyone off their feet,” he said.

“I think White Star planned a small collision of some sort and then a straightforward ‘rescue’ of the passengers by ships waiting nearby. Unfortunately, the ship was steered hard left, instead of right and turned away from the rescue ships.

“It may also have hit a wreck or another ship. And most of the passengers didn’t stand a chance.”

Asked how people react to his views on Titanic, Mr Gardiner said: “I give regular talks and most people are fascinated, especially engineers who know how ships work.

“But this isn’t hidden information I am unearthing.

“You only have to read the inquiry notes – see how many people’s testimony was strangely ‘stopped’ and look at all the official paperwork – to see the ships were swapped.”

Mr Gardiner said the real Titanic sailed on as Olympic for the rest of her career, before being sent to the breaker’s yard in 1937.

He said: “I think all this celebration of the Titanic is a bit sick. I don’t think White Star planned to kill all those people.

“But they did die and Olympic should be left in peace, a the bottom of the North Atlantic as a grave.

“I am now working on an American-made documentary, which will completely lift the lid on what happened with Titanic, once and for all.

“I will prove the ships were swapped and this terrible accident was completely avoidable.”

The Great Titanic Conspiracy by Robin Gardiner is published by Ian Allan, priced £19.99.

See today's print edition of the Oxford Mail for a special eight-page supplement about the Titanic.